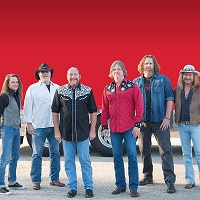 GOLD Entertainment presents an evening with The Marshall Tucker Band performing their classic Southern rock hits live in concert at Seminole Casino Hotel Immokalee on Thursday, Jan. 27, 2022 at 8 p.m., with doors opening at 7 p.m. Advance tickets are on sale now for $69 and are available by phone at 1-800-514-ETIX or online at www.moreinparadise.com. Attendees must be 21 years of age.

The Marshall Tucker Band (MTB) came together as a young, hungry six-piece group in Spartanburg, S.C. in 1972, naming the band for a blind piano tuner after they found it inscribed on a key to their original rehearsal space. The band’s 40-plus-years music catalog consists of more than 20 studio albums and a score of live releases and has racked up multi-platinum album sales many times over. MTB’s indelible hits include the heartfelt singalong “Heard It in a Love Song,” the insistent pleading of “Can’t You See,” the testifying travelogue warning of “Fire on the Mountain,” the wanderlust gallop of “Long Hard Ride,” and the unquenchable yearning pitch of “Ramblin’,” to name but a few.

Lyft driver dies after suffering from medical episode on I-75

Family of 13 without a home after Lehigh Acres house fire