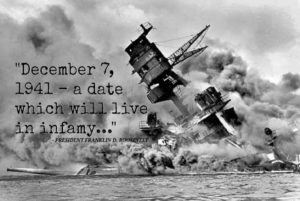 To honor the day, this year the Military Heritage Museum and the US Navy League Sun Coast Council are holding a special wreath laying ceremony in the Charlotte Harbor. For the wreath, we will be using orchid leis honoring those who sacrificed their lives on that fateful day as well as the names of veterans from Punta Gorda and Charlotte County.

The At-Sea Wreath Laying Ceremony begins at 11:30 AM with a buffet lunch at the Tiki Bar by the Four Points by Sheraton Punta Gorda with guest speaker Rear Admiral Larry Chambers on the significance of the Pearl Harbor Event. Small boats can moor up to the pier at the Tiki Bar or the Laishley Marina visitor’s pier and non-boaters can park at the Four Points by Sheraton Punta Gorda. At 1:00 PM we will form a line of small boats and sail past fisherman’s village on our way out to the ceremony site on west side of buoy #2. If you don’t have a boat and want to join the event, we will have several pontoon boats that can take up to ten people each. The same evening at 7:00 PM there will be a concert at the Museum Gulf Theater by the Gulf Coast Wind Ensemble in honor of Pearl Harbor Day.

This town of 170,000 replaced some cops with medics and mental health workers.

Formula One drivers divided as several choose not to kneel in support of Black...

Time could be running out for the 747