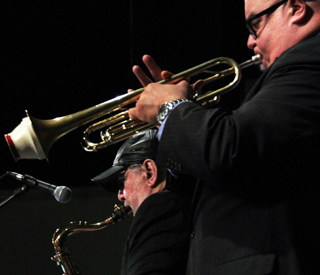 Join trumpeter Dan Miller and saxophonist Lew Del Gatto as they celebrate the genius and music of Irving Berlin. The music that Berlin composed for the Broadway Stage and the Hollywood Screen became an integral part of the Great American Songbook, loved by musicians, singers and audiences alike. He wrote over 1,500 tunes including God Bless America and White Christmas. Jerome Kern said, “Irving Berlin has no place in American music—he is American music.”
The program will include such favorites as How Deep Is The Ocean, Let’s Face The Music and Dance, Alexander’s Ragtime Band, Always, Blue Skies, Coquette, Falling In Love Is Wonderful, If I Had You, Change Partners, Cheek To Cheek and Anything You Can Do (I Can Do Better).
Dan Miller built his reputation touring and recording with Harry Connick Jr., Wynton Marsalis, Maynard Ferguson, Woody Herman and Tom Jones. Lew Del Gatto was a member of the Saturday Night Live Band from 1975-2006 and toured and recorded with Frank Sinatra, Aretha Franklin, The Rolling Stones and Buddy Rich. For this concert, they bring together a tremendous group of musicians for an evening of hard swinging, acoustic jazz music including the NYC pianist Roy Gerson (Vince Giordano & the Nighthawks), bassist Chuck Bergeron (Buddy Rich & University of Miami Jazz Bass Professor) and the spectacular drummer from Philadelphia, Tony Vigilante (Ben Vereen).

Road connecting Sanibel and Captiva islands is now under construction

Most Wanted Wednesday: We feature three of SWFL’s most wanted suspects; Feb. 19