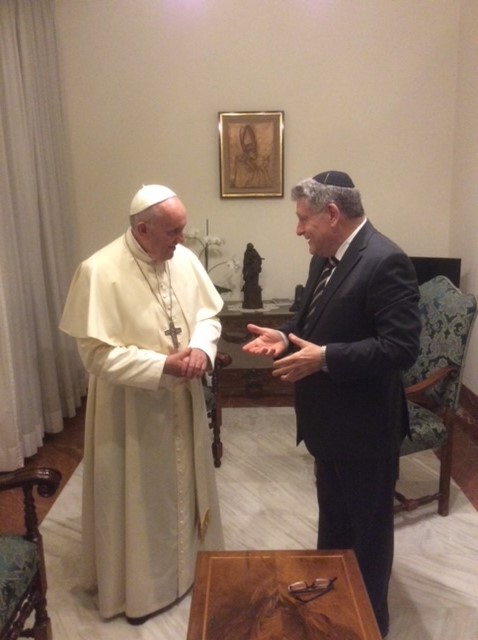 The Catholic-Jewish Dialogue of Collier County presents Rabbi Abraham Skorka on 3 p.m. Sunday, Feb. 20, 2022 in the ballroom of St. John the Evangelist Church at 625 111th Ave. N., Naples.
Skorka was rector of the Latin American Rabbinical seminary and a leading rabbi in Argentina when he and cardinal Jorge Bergoglio of Buenos Aires, now Pope Francis, began collaboration through personal meetings, writings and numerous TV appearances. Both started a relationship to promote interreligious dialogue between Catholics, Jews and others in their community.
Discussion between rabbis and Catholics was not unique, but the 25-year dialogue between Skorka and Pope Francis is truly historic by its depth, intensity and durability.
As an ordained rabbi with a doctorate in chemistry and four honorary doctorates, Skorka is credited with numerous biophysics publications and abstracts and has published seven books, two with Pope Francis, and dozens of articles on moral and ethical matters. Skorka wrote the introduction to Pope Francis’ official biography, and in 2014, he accompanied the pope on a tour of the Middle East, including participating in a widely publicized joint prayer for peace at the Western Wall.