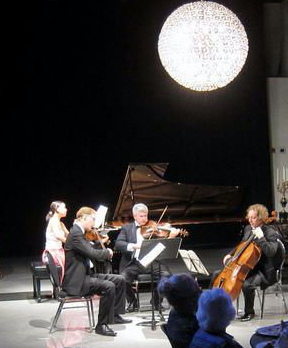 American Virtuosi is an incredible performance by some of the most celebrated musicians in the genre from around the country and it invites audiences to take part in an unforgettable evening of live classical music. Each season, the chamber concerts bring exquisite classical music to Southwest Florida. Now in its 12th season, the American Virtuosi concert presents Southwest Florida with a memorable evening of chamber music. American Virtuosi is the final concert in the Chamber Music Series at the Sidney & Berne Davis Art Center. Each season, renowned chamber musicians perform in the acoustically ideal first floor Grand Atrium.

American Virtuosi concerts are generously sponsored by: Nicholas Winograd and Barbara Garrison and the entire chamber series is sponsored by Rob Diefenbach

Peter Winograd joined the American String Quartet as the first violinist in 1990. He gave his first solo public performance at the age of 11, and at age 17 he was accepted as a scholarship student of Dorothy DeLay at the Juilliard School. Recognized early as an exceptionally promising young artist, Winograd was a top prizewinner in the 1988 Naumburg International Violin Competition. He then made his New York debut to critical acclaim and has since appeared as a guest soloist with numerous orchestras and in recitals across the country and abroad. Peter holds Bach­e­lor’s and Master’s degrees from The Juilliard School and has been a mem­ber of the violin and chamber music faculties of the Manhattan School of Music and the Aspen Music School (where the American is Quartet-in-Residence) since 1990. For more information, visit http://www.americanstringquartet.com/winograd.htm.

Jim Griffith received his M.M. degree from the Juilliard School. He also received his undergraduate degree from the Manhattan School of Music and attended Florida State University. He is a former member of the Hudson String Quartet in New York, faculty member of Point-Counterpoint Chamber Music Camp in Vermont and founding member of the Palm Beach Chamber Music Festival. He formerly served as principal violist of the New York Pro Arte Chamber Orchestra and the New York Virtuosi. Currently, he is enjoying his thirty-third season as a violist in the Naples Philharmonic. Mr. Griffith is also the Executive Director of the Sidney & Berne Davis Art Center.

Andres Díaz has exhilarated both critics and audiences with his intense and charismatic performances since winning the First Prize in the 1986 Naumburg International Cello Competition. He was awarded the prestigious Avery Fisher Career Grant and was nominated for a 2009 Latin Grammy. His numerous orchestral appearances have included performances with the American Symphony, Milwaukee Symphony, Seattle Symphony, Rochester Symphony, National Symphony Orchestra, Chicago Symphony, and the Atlanta Symphony under Robert Shaw. Highlights of his recent seasons are tours of Taiwan, Hong Kong, Korea, Japan, Hawaii, and Canada; and appearances in Chile, Venezuela, Argentina, and the Dominican Republic. His debut solo recording on MusicMasters with pianist Samuel Sanders was acclaimed by the Boston Globe as “strong and subtle; everything Díaz does has personality and, better than that, character.” His most recent release features the six Bach Suites on the Azica Records label. His summer festival appearances include the Banff Centre, Santa Fe, La Jolla, Marlboro, Ravinia, Bravo! Vail, Spoleto, [email protected], Saratoga, and Tanglewood festivals. Mr. Díaz graduated from the New England Conservatory, where he worked with Laurence Lesser and Colin Carr. He is a professor at Southern Methodist University and holds the Koerner Chair in Cello at the Glenn Gould School of the Royal Conservatory of Music in Toronto.. For more information, visit https://www.smu.edu/Meadows/AreasOfStudy/Music/Faculty/DiazAndres.

Milena Pajaro-van de Stadt is the violist of the Dover Quartet, the Penelope P. Watkins Ensemble in Residence at the Curtis Institute of Music. Ms. Pajaro-van de Stadt has appeared as a soloist with the Tokyo Philharmonic Orchestra, the Jacksonville Symphony, and the Sphinx Chamber Orchestra; and has performed in recitals and chamber music concerts throughout the United States, Latin America, and Europe, including an acclaimed 2011 debut recital at London’s Wigmore Hall. With the Dover Quartet she won first prize and every special award at the Banff International String Quartet Competition in 2013, and the gold medal and grand prize in the Fischoff National Chamber Music Competition in 2010. Her numerous awards also include first prize at the Lionel Tertis International Viola Competition, and top prizes at the Tokyo International Viola Competition and the Sphinx Competition. A violin student of Sergiu Schwartz and Melissa Pierson-Barrett for several years, she began studying viola with Michael Klotz at the Bowdoin International Music Festival in 2005. Ms. Pajaro-van de Stadt graduated from the Curtis Institute of Music, where she studied with Roberto Díaz, Michael Tree, Misha Amory, and Joseph de Pasquale. She received a master’s degree in string quartet performance from Rice University’s Shepherd School of Music, where she studied with James Dunham as a member of the Dover Quartet. Ms. Pajaro-van de Stadt joined the faculty of the Curtis Institute of Music in 2020. She also teaches at Northwestern University’s Bienen School of Music.
American Virtuosi Concert

You may also like the following events from The Sidney & Berne Davis Art Center: