The Charlotte County community is still mourning Christopher Taylor, the Charlotte County Sheriff’s Office deputy killed in a violent crash. He will soon be laid to rest by his loved ones, and those who knew him are reflecting on his life.

WINK News spoke to two of Taylor’s former teachers, one at North Fort Myers High School and one at the police academy. Both said he stood out and said his smile and his energy were contagious.

At the Southwest Florida Police Academy, a wall is lined with pictures of graduates. Erica Rich has taught around 700 of them, but out of all the faces, one stands out. 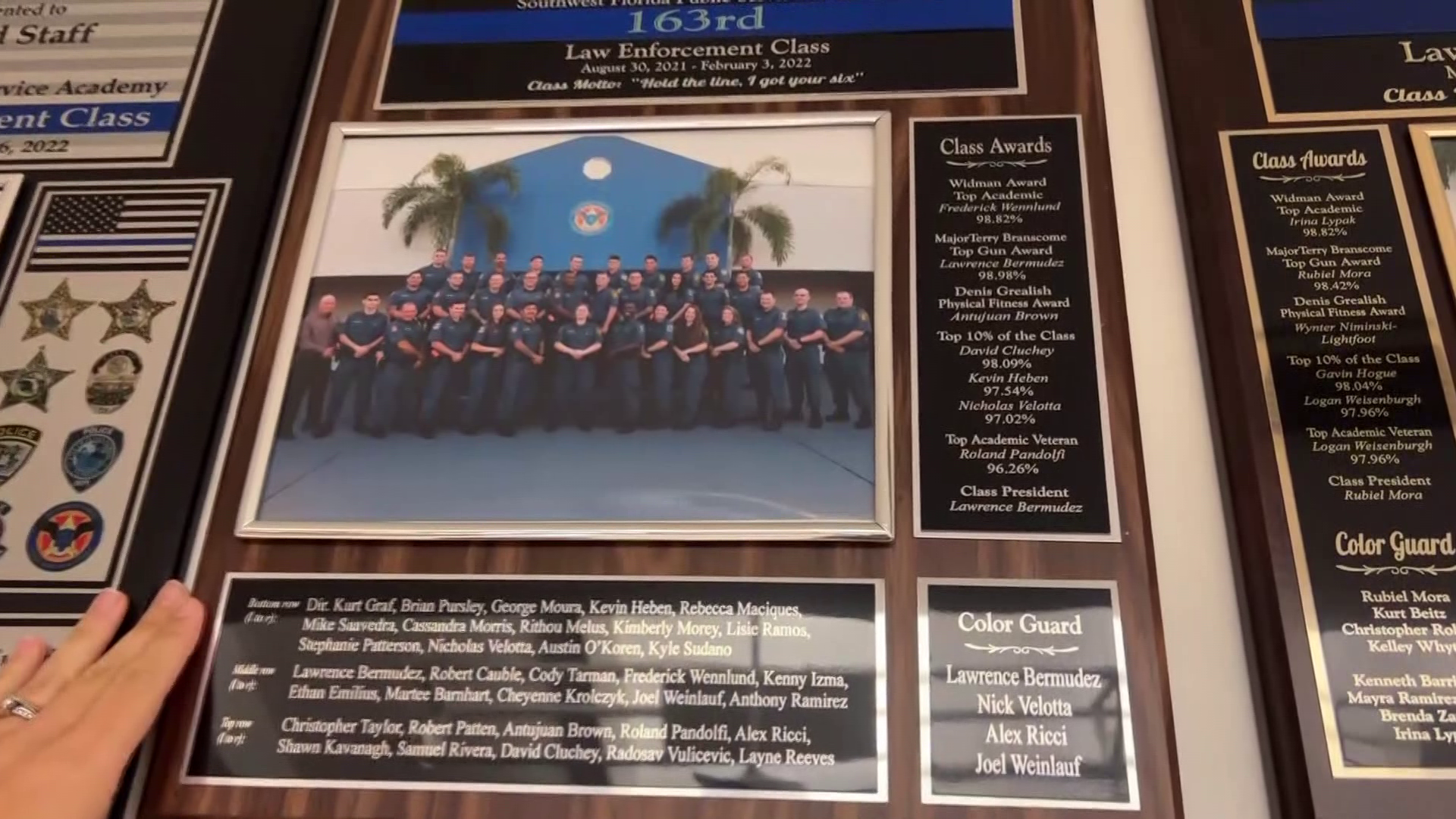 “I can remember exactly where he sat in class. I can remember interactions with him,” said Rich. “I can just sit and think of his smile and think of how he affected those that were around him. And I have absolutely no doubt that’s what he did when he left the academy.”

Rich was an instructor at the police academy, and Taylor was one of the last students she taught before being promoted to law enforcement coordinator.

She said she knew he was meant for something special.

“He just had it naturally, soft and kind and compassionate and respectful all the way to strong and being able to command a room if needed. And that is exactly what he was,” said Rich. 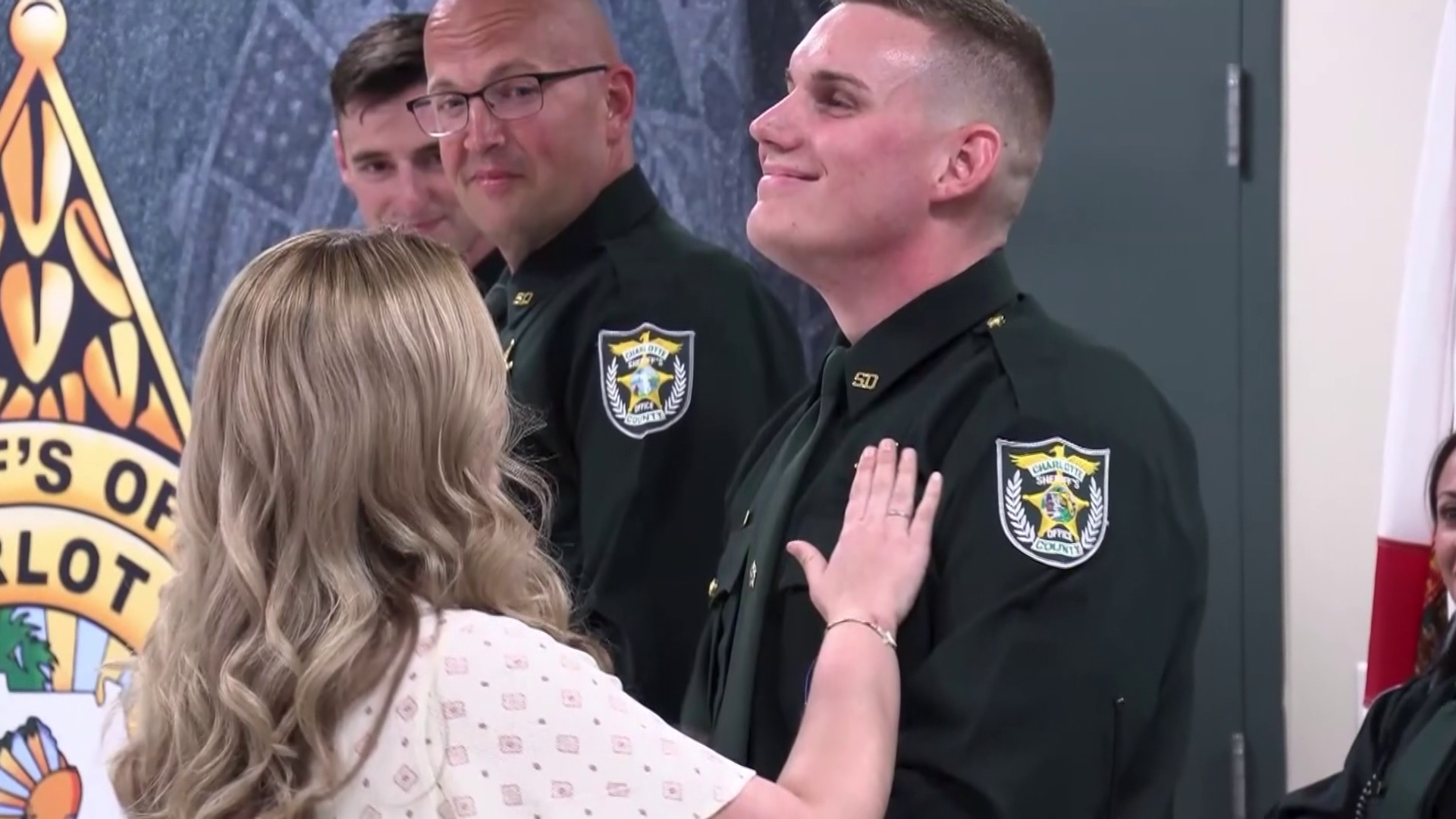 She didn’t know it would end so soon. On Tuesday, November 22, the phrase “Chris is ” became “Chris was.”

“Instantly, I had my fair share of mourning, and thinking back, it’s hard not to be emotional,” Rich said.

23-year-old Taylor died when crash investigators say a drunk driver hit and killed him on I-75.

“When I first heard the news, it’s, you hear it, and you process it on one level, but then you wake up, day and day again. And you think that that couldn’t have been true like that could not have happened. I’m still grappling with it. It’s been over a week now,” said Susan Cook.

In high school, Cook was Taylor’s English teacher, but she also knew him on a more personal level. He worked with her daughters at fast-food restaurants while they were both in school together.

Cook said from the moment she met him, she knew he would do great things.

“He was destined. He was just a different kind of person. Very introspective, I’m going to say, though you could tell that he thought hard about things that you asked him or problems, he would think hard about a solution before he would just offer up the first thing that came to his mind, which is appreciated again. And 17 or 18-year-old young man is what he was at that time. And then I got to know him on a more personal level. He became like a big brother to my youngest daughter, actually, just from hanging out in our home,” said Cook.

The woman accused in the crash, Cassandra Smith, 30, pled not guilty to DUI manslaughter and waived a formal arraignment. Smith had a previous DUI arrest in April of 2021 in Palm Beach County.

Smith was one of the people who called 911 after the crash, not knowing what to do. She told dispatchers that she tried to avoid the cars on the road.

Others also called 911 as they tried to help save Deputy Taylor’s life.

“I don’t think we know where the person in the Jeep is. This might have been like a drunk driving, and we’re still trying to do CPR.”

“You’re going to need an ambulance. The back of this patrol car is destroyed.”

One of the calls that came into dispatch was from Smith

In the six-minute conversation, she told the dispatcher repeatedly what she tried to do in the moments leading up to the crash.

Smith: “I was just trying to avoid the cars on the road.”

Dispatcher: “OK, ma’am, stay on the line with me.”

Smith: “Oh my god. I am going to like have an anxiety attack.”

The call did have some head-scratching moments

Dispatcher: “What kind of vehicle were you in?”

Dispatcher: “What color is it?”

Dispatcher: “Are you in a green Jeep?”

The dispatcher asked Smith if she was hurt.

“No, I’m fine. I’m concerned about the police officer that’s on the ground,” Smith told the dispatcher.

Smith was told to put her hazards on by the dispatcher but had to be told how to do it.

Her license expired on November 20, just two days before Deputy Taylor was killed.

A public memorial service will be held on Wednesday in memory of Deputy First Class Christopher Taylor. Services will be held at the Babcock Ranch Field House at 10 a.m.