Built to withstand Category 4 tropical winds, a new hotel in Bonita Springs was put to the test last week as staff and corporate representatives here for its launch safely hunkered down for days to ride out Hurricane Ian.

“It’s been kind of wild. We opened in a hurricane. How crazy is that?” said Tom Albrecht, director of sales for the new hotel. “But we’re OK. Everybody is OK.”

The hotel came through the hurricane without any damage except for some downed signs in the parking lot and debris blown into its outdoor swimming pool. Without power for about 48 hours, the hotel had a backup generator providing electricity to some parts of the four-story building.

The hurricane reaped an unexpected benefit for the hotel: full occupancy of its 113 guest rooms and suites. “We weren’t full for the first couple of nights, but we certainly have been since then. The demand is incredible,” Albrecht said. “We’ve got displaced people, of course, and a couple of companies here for insurance adjusters. I’ve got requests for other rooms but we’re full.” 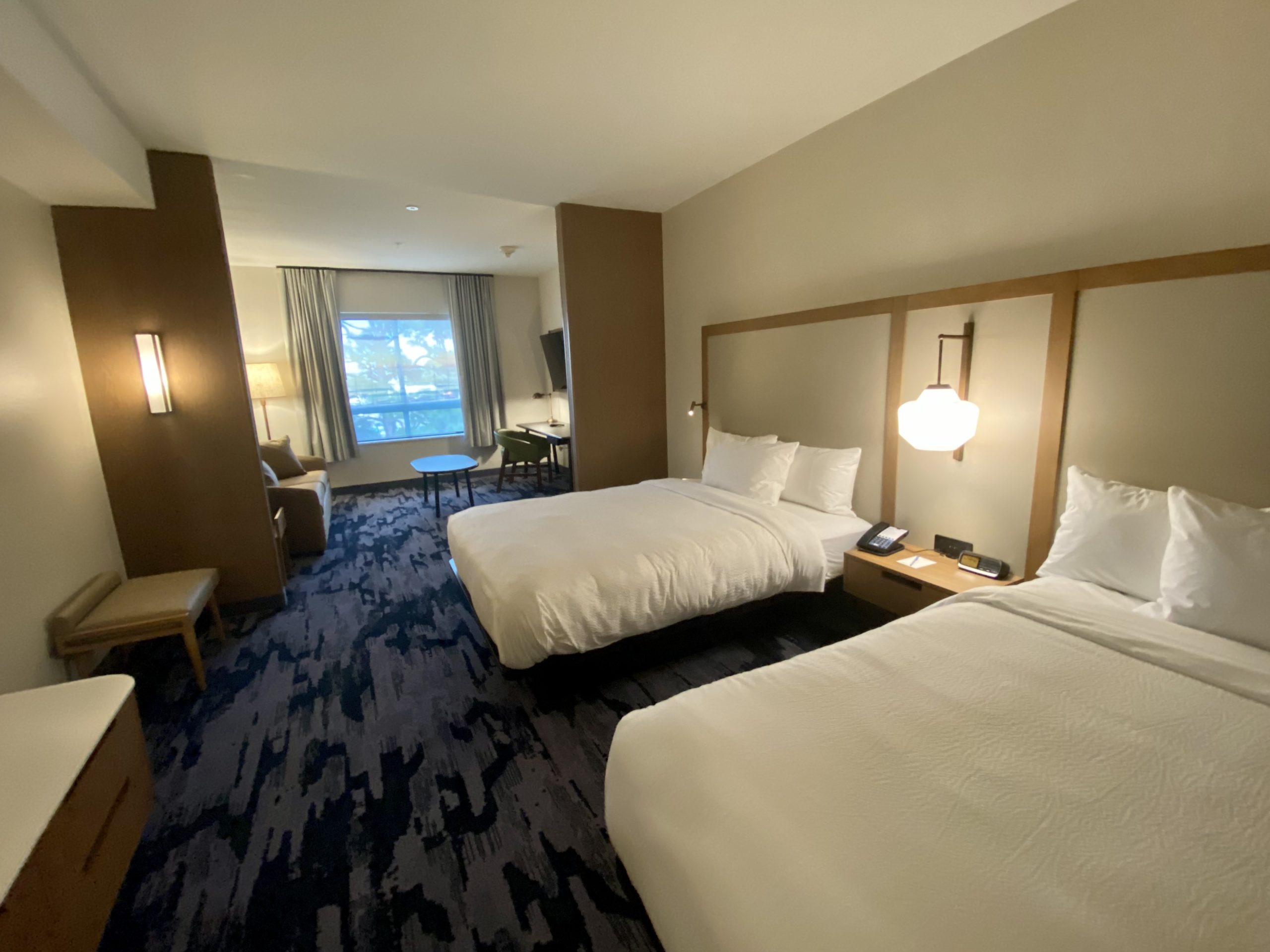 The hotel had a couple of cancellations for previously scheduled local events, such as a business after-hours event for the SWFL Inc. chamber of commerce that had been scheduled for this month.

Originally branded Fairfield Inn & Suites, the hotel is at 28090 La Plaza Bonita Loop, between The Home Depot and Imperial Bonita Plaza just east of Bonita Beach Road and Imperial Parkway. It’s the first hotel in Florida owned and managed by Missouri-based O’Reilly Hospitality Management, which has hired a staff of more than 25 for its newest property.

Originally planned to open more than a year ago, the building encountered multiple permitting and construction delays and setbacks, resulting in the project coming in at about three or four times what it was originally expected to cost, according to a corporate liaison. The business-friendly result offers many amenities, including complimentary breakfasts, a full bar with craft cocktails and beers and a bistro-style dinner menu.

“We offer free robust Wi-Fi throughout the entire building with a beautiful pool, hot tub and pool deck, complimentary fitness, and business centers, three meeting rooms, guest laundry facility, EV charging stations and a small market. All our guest rooms include a mini-refrigerator, microwave, coffee maker, iron with ironing board and Bluetooth in the bathroom,” Albrecht said. “We have Bluetooth speakers in the mirrors. So, if you want to listen to music and sing in the shower, you can.”

Multiple meeting rooms on the hotel’s first floor are available for local businesses or community groups, including a multimedia room for larger groups. “It can handle a fair amount of people for a small hotel,” Albrecht said. “It can handle about 50 people in a theater setup.”

“The whole grand philosophy for Fairfield is keep it clean and simple,” Albrecht said. “So, it’s a pretty straightforward, clean design.”

The hotel features 21 suites and 11 of its rooms are ADA accessible, designed for wheelchair use with extra space for easier navigation and grab bars. Some rooms are created for hearing-impaired guests, Albrecht said.

The standard king rooms have walk-in showers, plus roll-in showers are available. The queen/queen rooms with two queen beds come with bathtub showers. “I think the rationale behind that is two queen beds is more likely to have a family. That way you can give your young one a bath.” 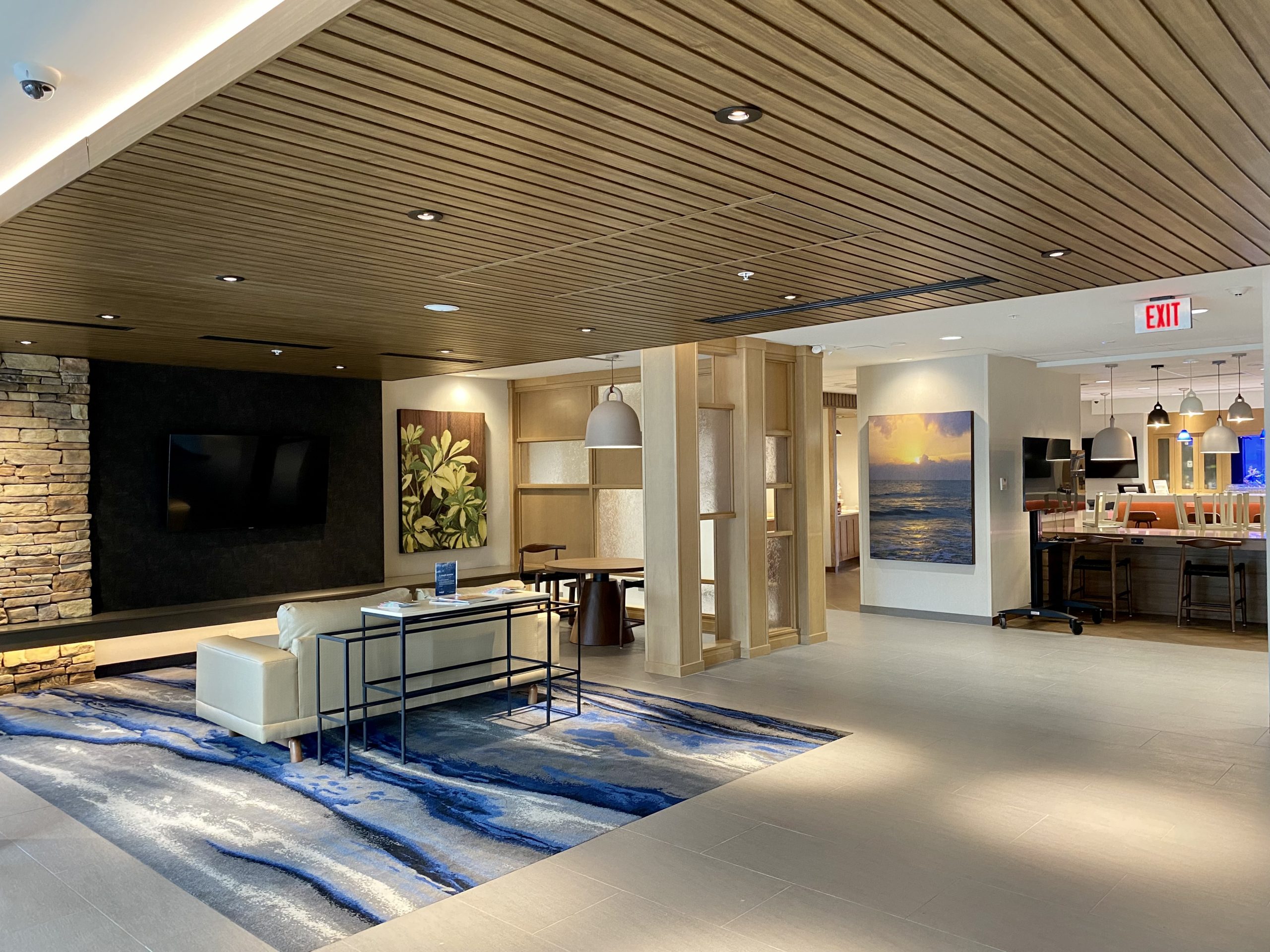 In an effort for sustainability and convenience, pumps of shampoo and conditioner on the tile walls replace tiny individual bottles of personal products. Colorful sunscreens in the outside windows give guests simulated beach or sunset views even though the hotel is five miles from the Gulf shore.

“We think it’s a really good location. I love the fact that we’re midway between Fort Myers and Naples,” Albrecht said. “We’re close to the expressway. You can get to the airport in 15 to 20 minutes.”

Although it already opened last week, the hotel’s ribbon-cutting ceremony still is planned for Nov. 1.