Is Governor Ron DeSantis unbeatable in November? DeSantis is ahead in the polls and breaking records when it comes to fundraising.

WINK News investigative reporter Céline McArthur spoke to Charlie Crist to find out what he’s doing to try and close the gap.

Crist knows he can’t catch DeSantis when it comes to fundraising. His war chest is 23 times bigger, but Crist is only four percentage points behind in the polls.

There are four million non-party affiliated voters up for grabs. Crist thinks many of them will vote for “Florida man.”

Crist got a round of applause from a crowd of 130 supporters at a county club fundraiser in Punta Gorda on Tuesday.

“I didn’t know there was this many Democrats in the whole county,” said Crist at the fundraiser.

His speech went on for about 15 minutes. He commented on Governor Ron DeSantis’ migrant flights to Martha’s Vineyard.

“I thought, you know, there’s no way you can top this. And then he does, he does something else, galactically stupid, and embarrassing, and immoral, and illegal,” said Crist. “Everybody wants to secure border, but there are ways to advocate for it and ways not to.”

He also talked money and downplayed his much smaller war chest, saying it’s not the money that will propel him back to the governor’s mansion.

“I know he’s got more money than whatever. But I don’t really care. We have you,” Crist said.

His speech was heavy on talking points, and light on specifics. So, as he’s rushed out to his next event, WINK News asked him if he thinks DeSantis broke the law when he flew 50 migrants from Venezuela to Martha’s vineyard. Crist isn’t sure.

“That’s why you have an investigation to see what legalities may have been pre-broached here. And I think, on several fronts, they could have been luring them falsely to get on planes. That’s a big problem,” said Crist.

DeSantis has argued that was the way to get the national attention and the national spotlight on the immigration issue, and he says that states should share in the burden.

“He’s willing to be inhumane to other people in order to make a political point. That sounds like a monster to me,” said Crist.

So what does Crist think needs to happen? “Well, you treat them humanely. Let’s start with that, for crying out loud. I mean, you know, provide shelter, provide food,” said Crist.

His solution is one his party has not been able to solve since taking control of the White House, Senate and House nearly two years ago.

“We need to have comprehensive immigration reform. Let’s start with that. The Republicans scream about immigration, but they’ll never pass any reform to fix it,” Crist said.

WINK News asked Crist how can he force down property insurance rates. “Lower the rate by passing a law? It’s not complicated. It has to be this, or you don’t do business in Florida. And you have to cover auto as well as property at the same time and stop letting them cherry-pick. He lets him do and run roughshod on Floridians every day. Why? Because they give him millions of dollars. That’s wrong. That’s corrupt.”

When Crist tried to leave, WINK News Investigative Reporter Céline McArthur asked him about his campaign poster that depicts him as a superhero named “Florida man.” 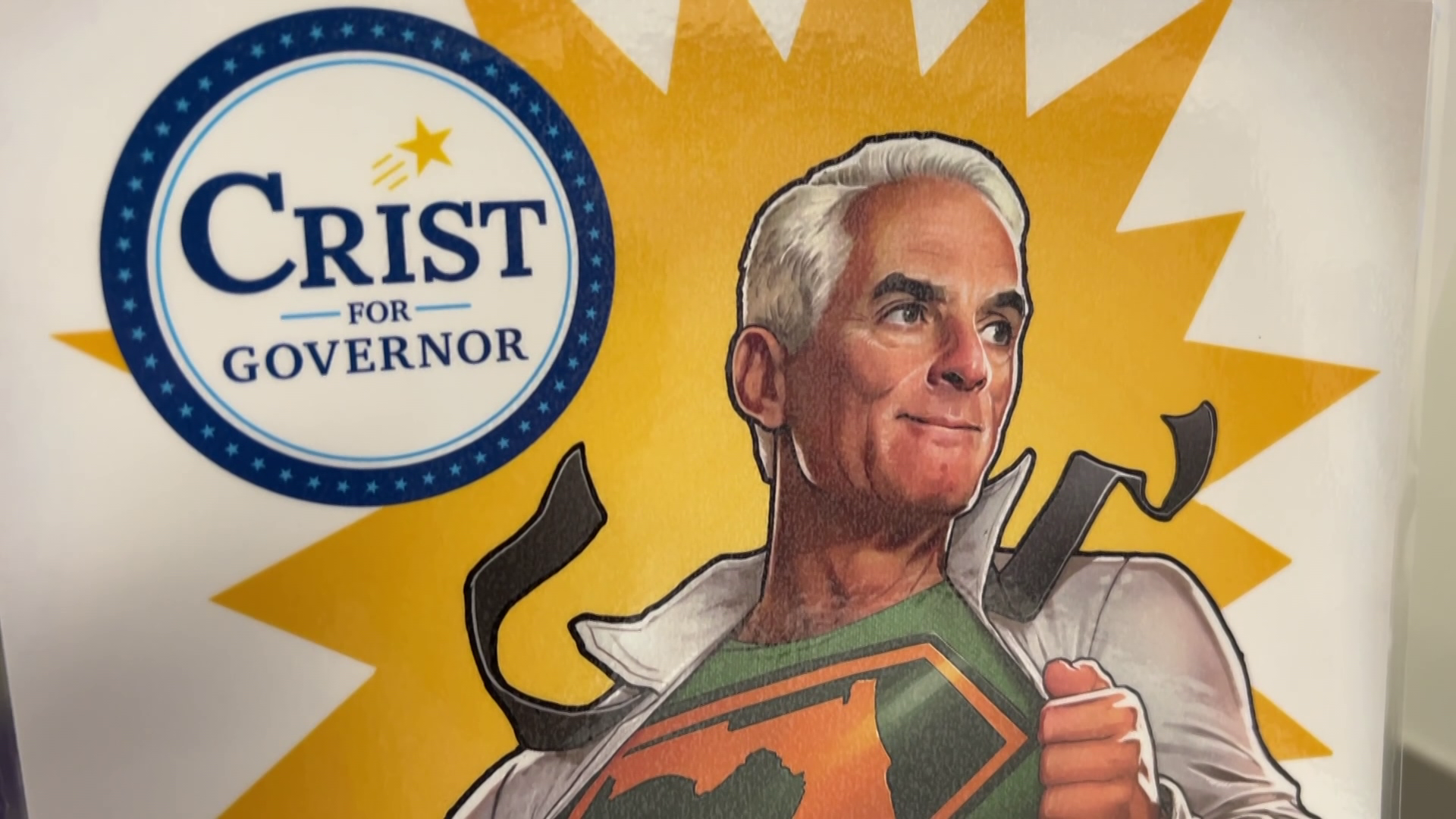 Céline: “Tell me what this means to you.”
Crist: “I don’t know I didn’t draw it.”
Céline: “What do you think when you see this?”
Crist: “Well, I hope what you see is somebody who’s going to stand up for Florida, who really does care about the sunshine state and wants to do what’s right for our fellow Floridians. Instead of just what’s right for Ron DeSantis’ political future.”

You can read more of Céline’s coverage on Charlie Crist by clicking here.