Newly uncovered information may raise questions about how the School District of Lee County awards contracts worth millions of dollars in taxpayer dollars to vendors.

The information is part of the lawsuit between Alife Oakes and the district. It asks how and why certain decisions involving vendors were made.

This is coming up now because Oakes had his food vending contract terminated by the district after controversial Facebook posts more than two years ago.

The documents show Oakes hired a private investigation firm to explore how the district finds and hires vendors.

One deal the private investigator looked into was a $3 million locksmith contract.

It went to two companies, neither of which seemed to fit the district’s minimum requirements and one of which is part-owned by a newly appointed official.

The school shooting at Broward County’s Marjory Stoneman Douglas High in 2018 shattered ideas of safety and security on campuses across the state.

Lee County School Board members Betsy Vaughn and Gwyn Gittens pushed for an exhaustive search for the best and most affordable locksmith vendor.

“I was accused of being in the weeds, of saying things or asking for things that were not my business,” Vaughn said.

Meanwhile, Gittens said: “I was told stay in your lane and stop asking questions. And I asked more questions.”

The board eventually awarded the $3 million contract to two vendors – Big League Builders Inc. and Integrity Builders of SWFL Inc – on Dec. 10, 2019.

By the district’s own guidelines, state records appear to show that neither company fit the minimum requirements to get the contract.

When asked about the way contracts were rewarded, Vaughn said, “Absolutely, it’s part of the good old boys club.”

According to the district’s invitation to negotiate for the locksmith deal, applicants needed five consecutive years in related business, something companies could show with their Sunbiz profiles.

However, Sunbiz records indicate Big League Builders incorporated in March 2018, just a year and a half before Dec. 10, 2019, when the company was given the contract.

“We did ask for, I guess you could say, a waiver for the fact that we didn’t have a locksmith company,” said Mike Greenwell.

Greenwell owns 10% of Big League Builders and is listed as the group’s trustee.

His sons Bo and Garrett Greenwell own the rest of the company.

WINK News asked how Big League Builders was awarded a multi-million dollar contract that they weren’t technically eligible to apply for.

“We did have experience in that. Being a homebuilder and being involved as much as we are in building, every house has doors and locks on it,” Greenwell defended.

Greenwell’s situation gets even more complicated after Gov. Ron DeSantis recently appointed him to the Lee County Commission. He is also running to hold the position full-time.

WINK News asked Greenwell about potential conflicts of interest for an elected official to be involved with 8-figure contracts paid for by taxpayer dollars.

Greenwell said he is stepping back from his family business to avoid that problem.

“I didn’t completely step out. I’m stepping back. I think that’s the most important thing. It’s still a family-owned business,” he said. “I always knew this might be something that I wanted to do. This seemed like great timing.”

Integrity Builders of SWFL, the second company awarded the locksmith deal, was incorporated on April 22, 2019, just months before Dec. 10, 2019. They received the deal even though they seemingly failed to meet the 5-year requirements. 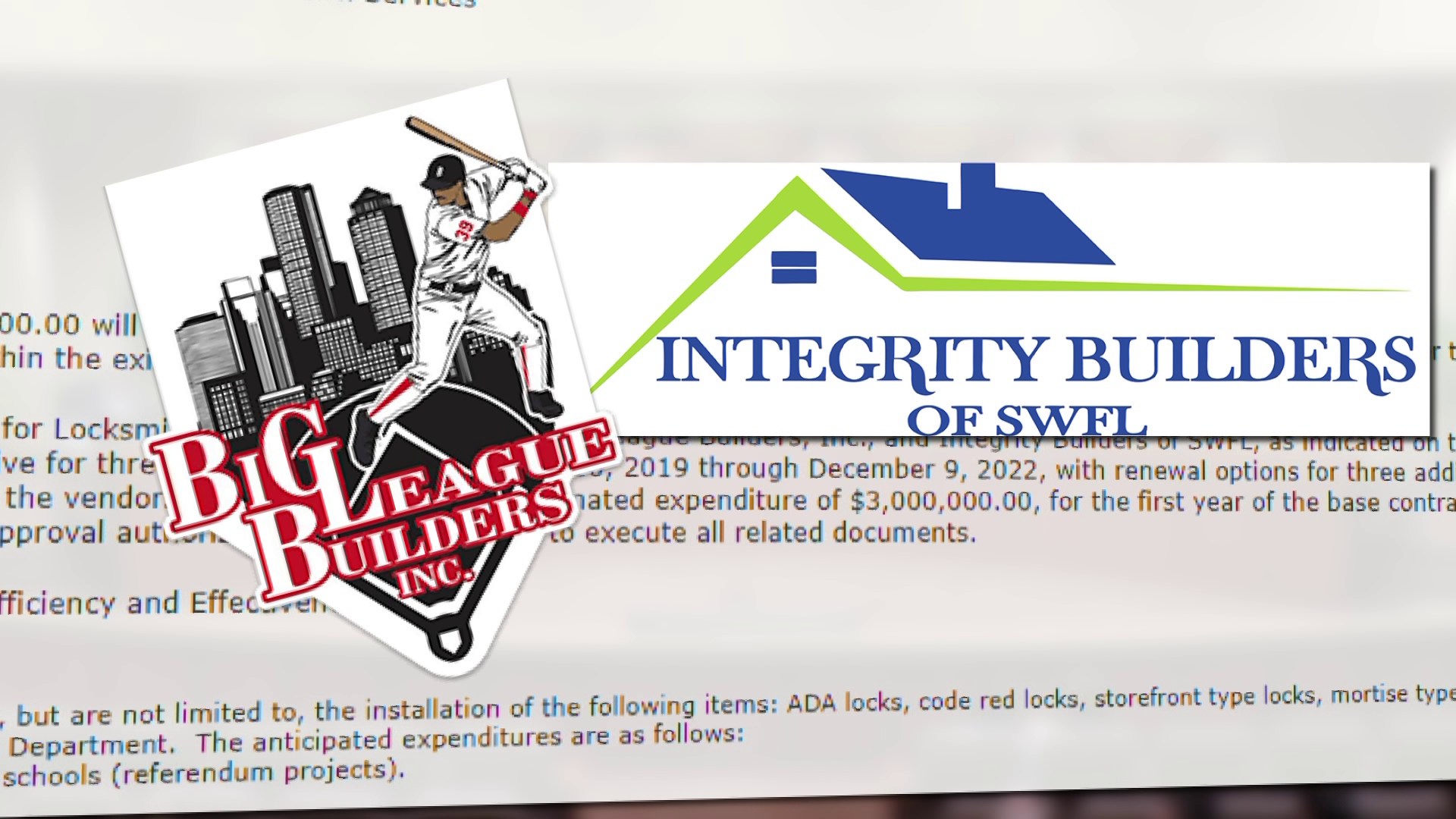 All of our voicemails and calls went unanswered.

District records show that three months after Big League Builders and Integrity Builders were awarded the $3 million contract, the district approved an increase in the deal, making it worth almost $11 million because “progress was moving faster than anticipated.”

But, was the work being done correctly?

Pictures obtained by WINK News show locks were improperly installed and the topic came up at public board meetings.

“I saw pictures of locks put in upside down,” Vaughn said. “I was livid.”

Seven months after the contract increase, a company named KPBG properties was established and the principal members include Peter Zielinski, Bo and Garrett Greenwell.

The principal address is for an empty plot of land in Olga.

So why was a company started between the two separate businesses months after they were awarded a contract worth almost $11 million in taxpayer dollars?

“There was a piece of property that was brought to our attention,” Greenwell said. “They were interested in buying it and came to us and asked if we’d be interested in being partners in it. So, of course, we think it’s a potential great spot, so we bought it.”

Meanwhile, Oakes, who still believes his vending contract was unfairly terminated over a controversial Facebook post, won’t accuse the locksmiths of bad intentions, but he does want answers to how Lee schools are giving out and terminating contracts.

“They didn’t meet the minimum criteria, there should be nothing left to say, right,” Oakes said. “We need to look into it.”

WINK News asked for an interview with Lee County School District Superintendent Chris Bernier but was told he was unavailable to talk about the contracts.

WINK News also reached out to Bo and Garrett Greenwell to ask about Big League Builders and the company’s relationship with Lee schools. We are still waiting to hear back.