Divers are installing a defense system against blue-green algae Thursday in Lee County to prevent another serious outbreak like in 2018.

The city is confident this will help prevent an outbreak by sending blue-green algae to die in the gulf.

Mike Ilczyszyn is the Cape Coral public works director, and he’s very familiar with the environmentally destructive blue-green outbreak in 2018.

“If that ever happens again, we’re better prepared today than we were in the past,” said Ilczyszyn.

Thursday, crews were hard at work in the Plato Canal in the water and on boats installing the bubble curtain. The bubble curtain consists of diffuser discs with very small holes that form the bubbles. The curtains are spread out six feet apart underwater. Once the compressor cabinets are turned the bubbles begin to form protection.

“If there’s a blue-green algae outbreak at in Lake Okeechobee and we see that coming down the river or if there’s one that starts in the river and starts being released our way, we are intending on turning on these bubble curtains,” said Ilczyszyn. “Creating that wall of air that will act as kind of a physical barrier or deflection shield for that algae.”

This is the second bubble curtain installed to help reduce blue-green algae. The first is in the Mandolin Canal Bridge installed in Sept. 2021 as part of the city’s test.

With permits approved the city plans to have 10 installed by Sept. 1.

Below is a list of canals that will have bubble curtains installed. 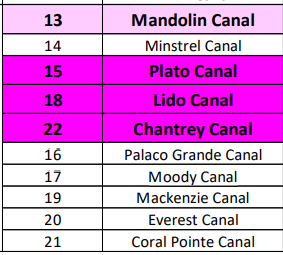 “Public works staff has been preparing for this day,” said Ilczyszyn. “You know with the training underwater cleaning the system that’s there looking at how it gets out together and basically as soon as we got the permits it’s go time.”