Investigation called for antisemitic flyers showing up at SWFL homes

A call for a federal investigation into the antisemitic flyers showing up at Florida homes.

The same flyers were found in Punta Gorda.

The people in Naples said they will not meet hate with hate.

One quote from the flyers said, “Every single aspect of the COVID-19 agenda is Jewish.” 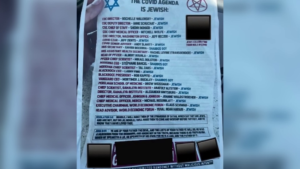 Jeffrey Feld, president & CEO of the Jewish federation of greater Naples said, “I think it is a horrible feeling to people to feel that they are being attacked.”

Fled said he takes this personally and whoever did this targeted the people he serves.

“It is unfortunate that people have so much hate and I wish that there would be ways that that could be stopped,” Fled said.

While the Naples Police Department and the Collier County Sheriff’s Office are investigating the matter.

The worry here is the law is not tough enough to stop this from happening on a regular basis.

Feld said the best way to combat hate is to not feed into it. If they’re throwing a party and no one comes, the party ends.

The call to investigate these flyers came from Florida Congressman Charlie Crist. He wants the department of justice to step in.

“As antisemitic hate crimes rise across the country, these flyers serve as a painful reminder of the threats posed by antisemitism and the very real dangers facing our Jewish communities. We must remain vigilant and root out hateful rhetoric before it turns into yet more violence,” Crist said.

The Jewish federation said its partnering with local congregations and the holocaust museum to find more ways to strengthen security so they can quote “All live in shalom.”