A lawsuit filed by Gabby Petito’s parents against the Laundrie family will move forward.

At issue is whether Brian Laundrie’s parents knew that their son killed Gabby before he fled back to Florida.

The Petito family filed the lawsuit in March claiming the Laundries knew Gabby, 22, was dead and kept the information from them.

The couple set out on a trip together last summer to visit national parks across the country, but in September Brian, 23, returned to North Port in their shared camper van without Gabby.

Brian went missing after going camping in Myakkahatchee Creek Environmental Park where his remains were later found. An autopsy stated he died of a self-inflicted gunshot wound.

Gabby’s remains were found in Wyoming.

Last week, The Laundries’ attorney released 8-pages of a notebookk that Brian left behind, confessing to killing Gabby. He wrote that she got hurt and he killed her ‘mercifully’.

After the public release of the notebook, Gabby’s mother Nicole Schmidt, posted on Twitter that she was fed up. She included a photo that said, “narcissists rewrite history to escape accountability.”

In the judge’s 8-page ruling, Judge Carroll said, “today’s ruling does not determine what happened to Gabby Petito.”

Instead, “it determines only whether Gabby Petito’s parents (the Plaintiffs) stated a valid claim against Brian Laundrie’s parents (the Defendants).”

The ruling also states: “On August 28, 2021, Brian told his parents that he murdered Gabby,” adding, “The Court must assume this to be true for this motion.”

That same day, according to the ruling, Brian’s parents Christopher and Roberta, spoke with an attorney.

Brian arrived in North Port on September 1, and he and “his parents then vacationed together at Fort DeSoto Park on September 6-7, 2021. They took this vacation each knowing that Gabby was dead and that her parents were frantically looking for her.”

The judge ruled the case could move forward in part to a statement released by their attorney as Gabby’s parents were mounting a search for her in Grand Teton National Park. 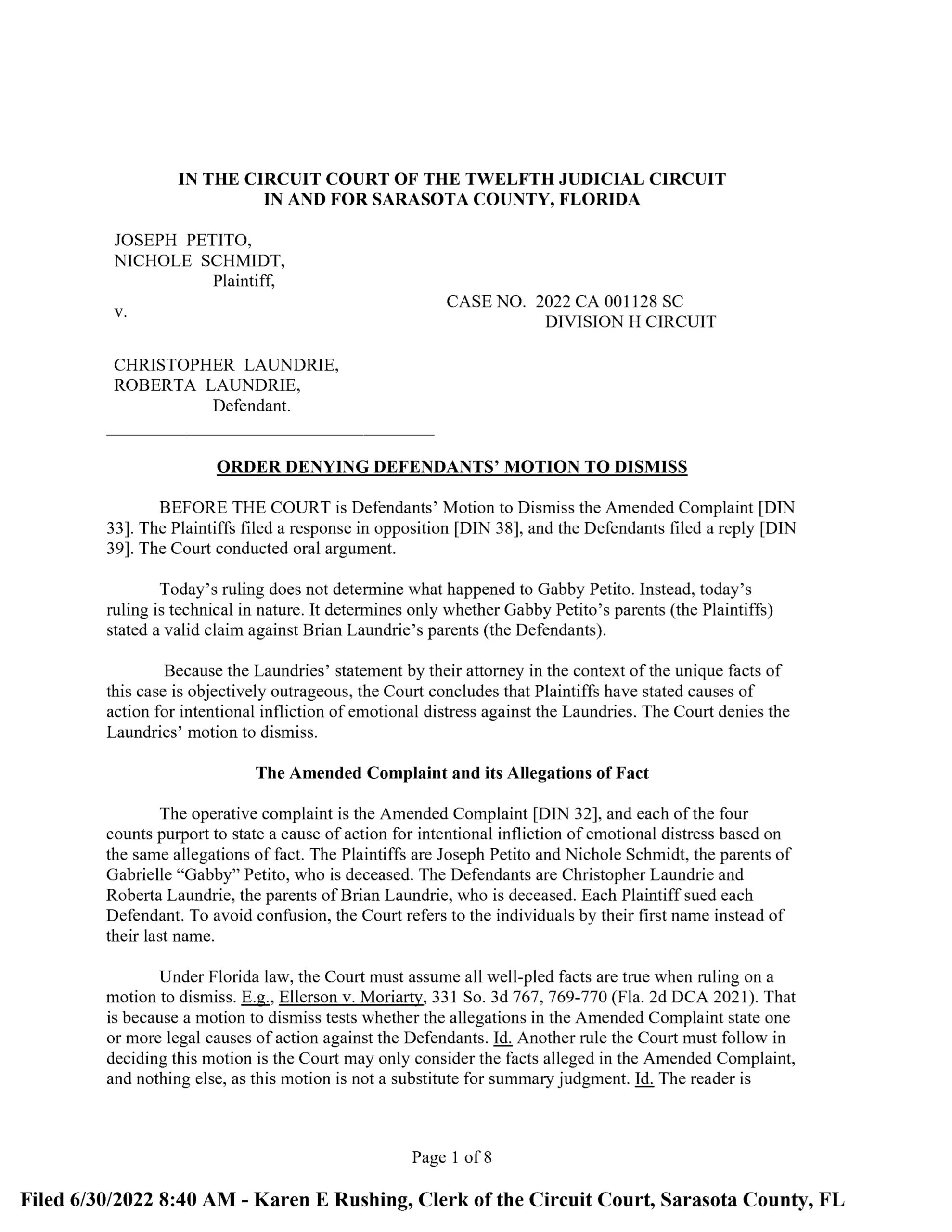 The statement in part reads: “On behalf of the Laundrie family, it is our hope that the search for Miss Petito is successful and that Miss Petito is reunited with her family.”

The statement itself is not outrageous, but “when juxtaposed with the other conduct in the case, though, the outrageous threshold is surpassed,” according to the ruling.

If the Laundries made their statement while they knew Gabby was dead and where she was found, then it was “particularly callous and cruel, and it is sufficiently outrageous to state claims for international infliction of emotional distress,” according to the ruling.

Matt Luka, the attorney representing the Laundries in court, in a statement, said he and his clients are “disappointed with Judge Carroll’s decision to deny the motion and allow this lawsuit to proceed.”

“Judge Carroll points out that the September 14, 2021 statement, standing alone, does not suggest outrage, but within the context of the other allegations in the case, the plaintiffs’ have met the threshold to go forward to the next phase. The Laundries will continue to use all available legal means to preserve their rights,” Lukka said.

The Petito attorney, Patrick Reilly, in a statement said the family is “appreciative f the thorough and well-reasoned decision” by Carroll.

“This gives them an opportunity to proceed with their claim for the emotional distress caused by the conduct of the Laundries. Joe and Nichole look forward to discovering the information the Laundries knew about Gabby’s death and her
whereabouts, and in particular getting a copy of any correspondence, emails and texts exchanged during the difficult period when Gabby’s whereabouts were unknown. They look forward to going to trial and are confident that ultimately the Laundries will be held accountable,” Reilly said, adding that Gabby’s parents do not wish to discuss the matter publicly.