Florida ranks third among states with properties at risk for fires

Fires are getting more intense and more frequent due to climate change, which is drying out vegetation and making fires more likely to spark and burn longer. Notably, that’s also increasing the likelihood of wildfires in areas known for temperate and humid climates.

Nationwide, First Street’s research shows about 26 million homes have at least some wildfire risk — a much greater number than has previously been reported.

Other Western states have a much higher portion of properties at risk of fire. In Wyoming and New Mexico, two-thirds of all properties have at least a moderate risk of fire; in Utah and Arizona, almost 60% do, and in Montana and Oklahoma about half do. 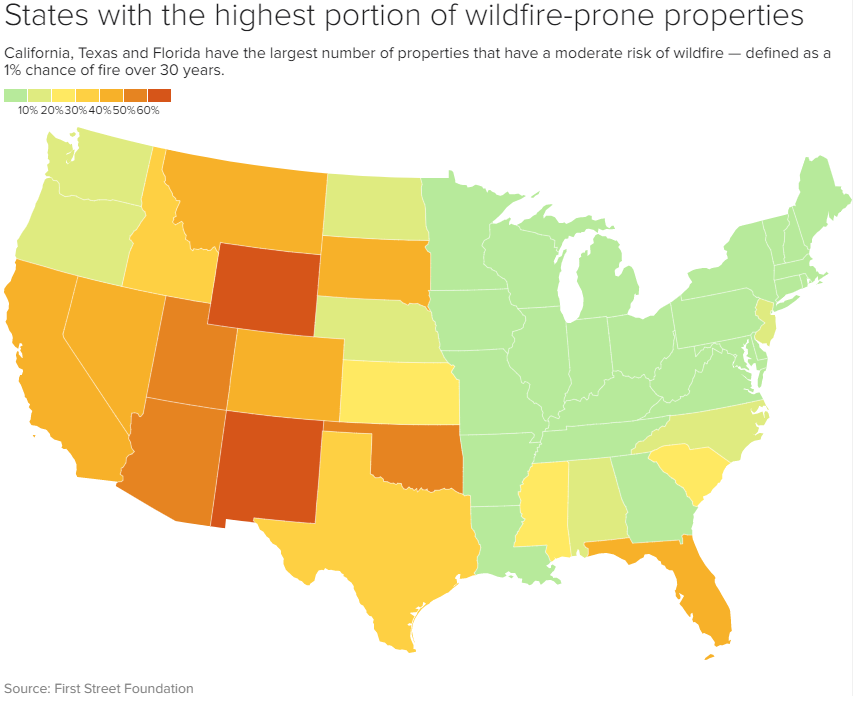 First Street, which has quantified the effects of climate change and flooding on the nation’s infrastructure, decided on a 1% risk over 30 years (the lifetime of a typical mortgage) as a meaningful floor to show the potential impact of fire damage. While far fewer homes are at risk of fire than other disasters, like flooding, the potential impact of fire is much more severe, said Jeremy Porter, First Street’s chief research officer.

“If there’s a fire that touches your property, then it’s not that you’re seeing $20,000 of damage, it’s total destruction,” Porter said. “The scale of damage is hard to grapple with.”

First Street’s research shows that wildfire risks are likely to grow in the next 30 year — especially in areas not currently known for wildfires.

“Wildfire risk is increasing in places where people may not expect it,” said Sara Brinton, lead product manager for Realtor.com. “People are really familiar with wildfire in Colorado, California, but wildfire risk is a growing problem in Florida, North Carolina, New Jersey.” 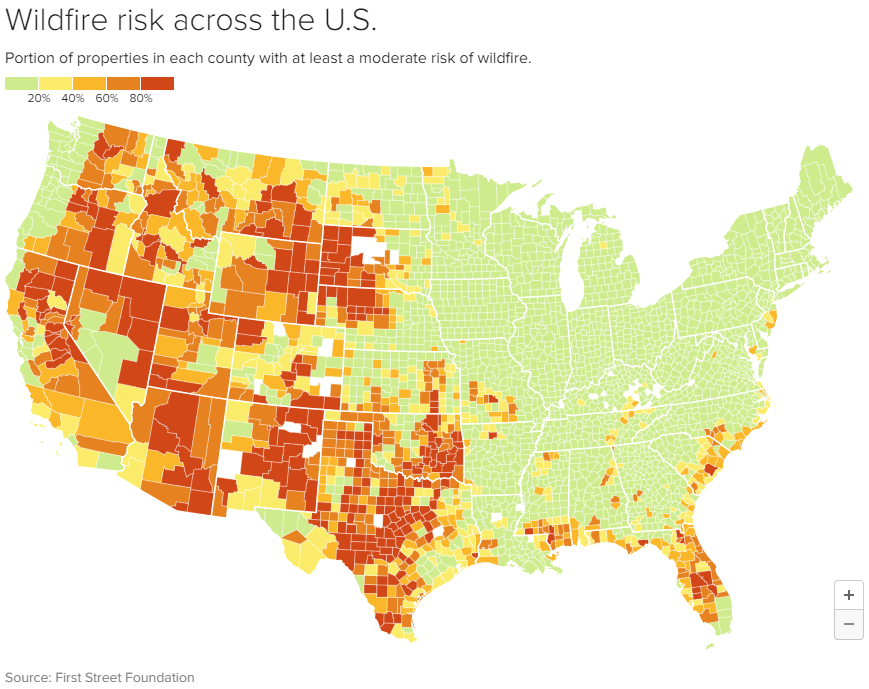 Realtor.com has assigned a wildfire risk score for every property on its site in the continental U.S. — including those that aren’t for sale — to educate homeowners and potential buyers, Brinton said. (Eventually, the feature will also be available for rentals.) The scores take into account the features of an individual building that make it more or less likely to burn, including the layout of the property, proximity of vegetation, building materials and even what type of windows a home has.

“Single-pane versus dual-pane windows are a big determinant of whether a house will burn in a wildfire,” said Ed Kearns, chief data officer at First Street. Features like metal screens on attic vents can also improve a house’s ability to resist in a wildfire.

Homebuyers are increasingly concerned about the risk of natural disasters to their properties as climate change makes mudslides, floods and wildfires more frequent. A recent survey by Realtor.com and HarrisX found that more than three in four recent homebuyers consider natural disasters when choosing where to buy a home.

“We hear regularly from consumers that it’s become so important in the homebuying journey,” said Sara Brinton, lead product manager for Realtor.com.

Two years ago, Realtor.com added a flood risk feature that lists the likelihood of flood damage for all properties. It’s since become one of the most popular features on the site, Brinton said.

Climate change, brought on by the burning of fossil fuels, is making drought more likely in places like the Southeast and other parts of the East Coast, which have not historically been known for fire, noted Kearns. Hotter temperatures can dry out normally humid forested areas and make fire more likely to catch and spread.

“It only takes about 100 hours of it being dry under hot conditions for fuel to become combustible fuel,” he said.

While Eastern fires typically don’t get as large as they do in the West, denser populations in the East mean thousands of people are potentially affected. And as the climate warms, the risks of fire will grow, noted Matthew Eby, First Street’s executive director.

“The last five years have been horrific, and that’s kind of the new norm — over the next few decades it’s only going to get more intense,” he said.