According to downdetector.net Orlando, Tampa, and down through the Southwest Florida coast all indicated user-reported outages.

Customers are receiving the standard message, “We’re aware that you may be experiencing a service interruption and are working to resolve the issue… We apologize for any inconvenience and appreciate your patience. Would you like to receive updates via SMS about the progress of the outage?”

Comcast says a fiber that was cut caused the mess.

The internet and cable provider experiencing a major outage is disrupting life and business.

“I had a hearing this afternoon that was on zoom with the court at 3 o’clock and it’s common for the court to schedule several issues to be heard at the same time,” said Goodman.

Court proceedings via zoom were cut-off.

“Is this thing on you know? Like nobody is responding. I’m like oh no, we lost the connection. I didn’t know if I got my whole argument in or if it cut off mid-argument,” said Goodman.

The court did hear goodman’s argument, and it’s safe to say Comcast Xfinity probably heard some arguments from customers.

Sixta has theories as to how the outage occurred.

“I’ve heard everything from solar flares to car accidents to a mistake boring where they had a fiber line. I actually believe the last one is probably the most likely,” said Sixta.

The fiber line cut in what Comcast said caused the outage, and a repair that could take some time.

So could your data be at risk? Sixta says no. “If it was actually affecting clients and there was a risk and client data Comcast Xfinity has a duty to report that pretty much immediately.”

Some customers have reported that their service has been restored.

Comcast’s Public Relations Vice President for Florida released the following statement about the cause of the outage:

This afternoon, we experienced a fiber cut that impacted our services in the Southwest Florida area. Network and engineering teams were deployed to repair the lines and we are now starting to restore services and bring our impacted customers back on line.  We sincerely apologize to our customers for this inconvenience. 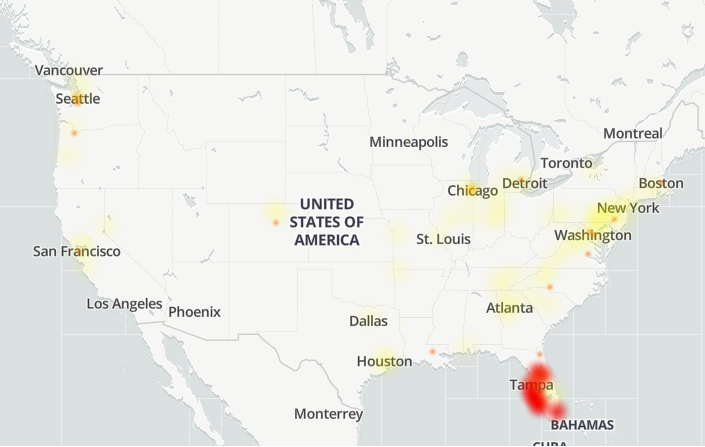