FTC win at trial against On Point Global; Check your inbox for an email about a refund

Consumers who were deceived by a wide-ranging scheme into handing over money or personal information in exchange for bogus advice on how to apply for government benefits can apply for redress payments as a result of a Federal Trade Commission lawsuit, but must do so by July 5, 2022.

The scammers, sued by the FTC in December 2019, ran hundreds of deceptive websites that promised a quick and easy government service, such as renewing a driver’s license, or eligibility determinations for public benefits like Section 8 housing or food stamps. The sites had names like DMV.com, floridadriverslicense.org and many others that were designed to mimic legitimate government websites. The defendants operated under several names, including On Point Global.

On sites where consumers submitted payments for supposed government services, they received at most a PDF with publicly available information on how to apply for a drivers’ license. On other sites that claimed to tell consumers if they were eligible for government benefits, consumers who submitted detailed and sensitive personal information almost immediately began receiving a wave of unwanted sales and marketing contacts.

As a result of the FTC’s win at trial, a federal court ordered a refund process to be established for consumers who were harmed by On Point Global and its network of fake websites. Consumers must submit claims in order to receive payments, and payment is available both for consumers who paid money to the sites and those who submitted personal information.

The money being used to provide payments to consumers is a result of a contempt motion filed by the FTC against one of the defendants in the case, Burton Katz. Katz was previously sued by the FTC for placing millions of dollars in unwanted charges on consumers’ mobile phone bills by using spam text messages pitching “free” gift cards. As a result of that suit, Katz was placed under a court order prohibiting from any further violations of the FTC Act. Because of his involvement in this new fake government websites scam, the FTC filed the motion alleging that Katz and other defendants were in contempt of that order. The court ruled in the FTC’s favor on the motion and awarded the monetary relief. 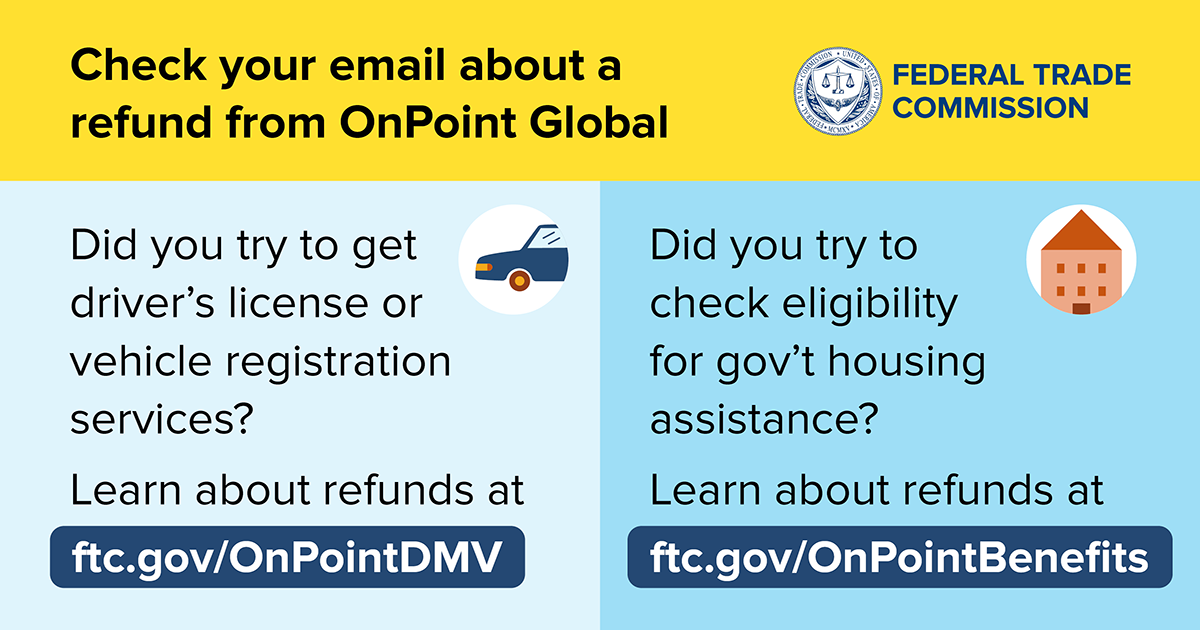 Did you use one of OnPoint’s websites — like DMV.com or floridadriverslicense.com — for driver’s license or vehicle registration services? If so, you can now apply to get back the money you lost. Learn more at ftc.gov/OnPointDMV. Don’t wait, the deadline to apply for a refund is July 5, 2022.

Also, if you used OnPoint Global’s websites to check eligibility for government assistance programs like the Housing Choice Voucher program or Section 8 housing assistance? If you entered personal information online, you can also apply for compensation here.

Thanks to the FTC’s lawsuit and $85 million judgment against On Point Global, people who are eligible for refunds will automatically get an email from Stretto, the company handling the payments.

The email will arrive by mid-April and give instructions on how to claim your refund. If you don’t get an email, but think you’re eligible, you can check your eligibility at onpointclaimform.com.