Americans are quitting at record rates. These 5 states are leading the pack.

A record number of American workers quit their jobs before the holidays, but the trend wasn’t evenly spread across the nation. According to new government data, employees in a handful of states handed in their resignations at a much higher rate than the national average.

About 4.5 million people quit their jobs in November, an all-time high. The government said earlier this month. But on Friday, the Labor Department provided a state-by-state peek at where workers are quitting, noting that 22 states experienced an increase in the so-called “quits rate” in November, while only two states experienced a decline in worker resignations.

The states with the highest quits rates are those experiencing tight labor markets and low unemployment rates — exactly the combination that’s causing employers to dangle incentives like higher wages and better benefits to lure new workers to their open jobs and keep the ones they already have. It’s all part of the so-called “Great Resignation,” which is marked by workers leaving their current jobs for several reasons, ranging from starting their own businesses to opting for early retirement.

Typically, workers are more likely to secure better pay if they switch jobs rather than remain in their current position, said Liz Wilke, principal economist at payroll provider Gusto, speaking about the overall quits rate.

“Part of what is driving the quits rate is it’s not that common to get an increase from their current employer  — it’s more common that you leave your employer for a better deal,” Wilke noted.

She added, “The areas that tend to have the highest level of quits are those with the lowest unemployment rate.” 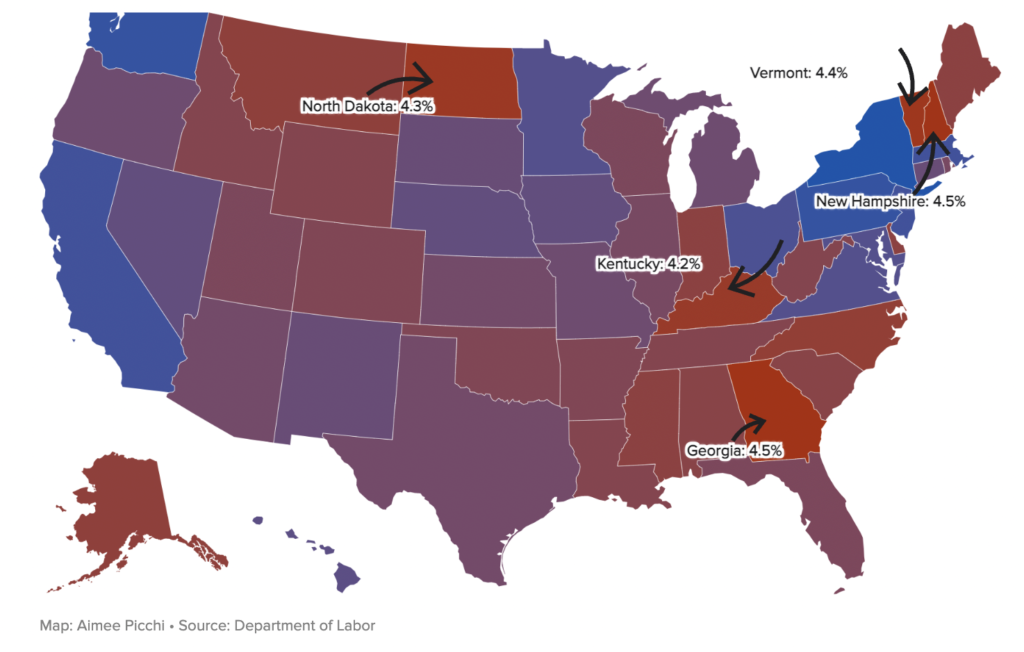 That’s the case with November’s data, where four of the top 5 states by quits rate have the lowest unemployment rates in the nation.

Georgia and New Hampshire, for instance, are tied for the top quit rate, at 4.5%, which means that about 1 in 22 workers quit their jobs in November. During that same month, New Hampshire had the 6th-lowest jobless rate, and Georgia had the 8th lowest rate in the nation, at 2.7% and 2.8%, respectively.

Below are the five states with the highest quits rates in November:

One caveat is that the most recent data is from November — before Omicron spread across the nation. There are some signs that the surge in COVID-19 cases is impacting the labor market, with the number of Americans filing jobless claims jumping last week to its highest level in three months.

At the same time, the ranks of people who are out of work due to COVID-19 surged in early January. A record 8.8 million Americans said they were not working earlier this month because they had COVID-19 or were caring for someone with the virus — triple the number from a month ago.

The surge in sick workers impacts industries ranging from hospitals to airlines, adding to the nation’s labor crunch. That may accelerate the quits rate if workers step back from their jobs to recover or care for relatives with COVID, for example.