On Thursday, the family of Gabby Petito met with the FBI at the Tampa Field Office as the investigation will be closed in the near future, according to a statement from the FBI.

They also say after a review of the notebook found near Brian Laundrie’s body, it “revealed written statements by Mr. Laundrie claiming responsibility for Ms. Petito’s death.”

The FBI opened its investigation into the disappearance of Ms. Petito on September 12, 2021, upon receiving reports from Gabby’s family that Ms. Petito was missing. The FBI, working with federal, state and local officials, organized a search of a remote area within the Grand Teton National Park and the Bridger-Teton National Forest.

On September 19, 2021, the search team located the remains of Ms. Petito at the Spread Creek Dispersed Camping Area near where she and Brian Laundrie had been seen together. Ms. Petito was found approximately three weeks after her last known communication. The Teton County Coroner’s Office subsequently concluded Ms. Petito died of “blunt-force injuries to the head and neck, with manual strangulation.” While law enforcement investigated all logical leads, the investigation quickly focused on the last person believed to see her alive—Mr. Laundrie. 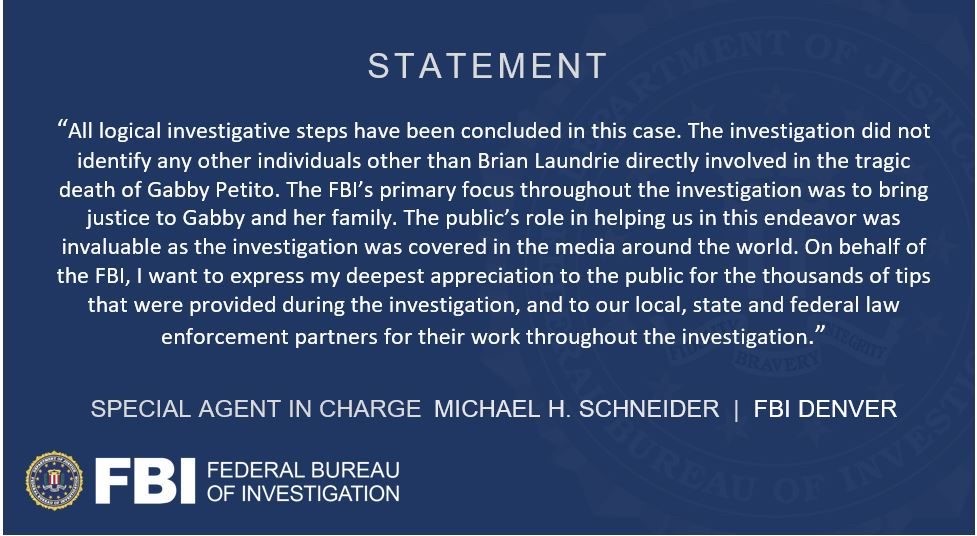 The Petito family said in a statement through their attorney:

“Gabby’s family would like to thank the Federal Bureau of Investigation, specifically the Wyoming, Denver, New York and Tampa offices, all of their task force members and their assisting agencies.

“Gabby’s family would like to thank the FBI’s Victim Services Department for all they have done for them. Victim Services has been there for support from the earliest stages of this investigation and helped their entire family navigate through the worst moments of their lives.

“We truly appreciate the FBI’s diligent and painstaking efforts in this extremely
complicated case. The quality and quantity of the facts and information collected by the FBI leave no doubt [that] Brian Laundrie murdered Gabby.”

And the Laundrie family attorney released the following statement:

“Gabby and Brian are no longer with their families and this tragedy has caused enormous emotional pain and suffering to all who loved either or both of them. We can only hope that with today’s closure of the case each family can begin to heal and move forward and find peace in and with the memories of their children.

“May Gabby and Brian both rest in peace.”

In October, when Laundrie’s remains were found, investigators also found a notebook nearby. Partial contents of that notebook are being revealed for the first time.

Just three months ago, his remains were found near the area that Brian Laundrie told his family he was going camping. Weeks later, Laundrie’s death was ruled as a suicide.

Now we’re learning that a revolver was found in Myakkahatchee Creek Environmental Park near Laundrie’s remains. And, the FBI says, Brian Laundrie is the only person they identified who was directly involved in Gabby Petito’s death.

WINK News Safety and Security Specialist Rich Kolko says investigators look at every possibility. “Investigators are going to look at anybody who could be a potential suspect… if that person sold them gas, checked them into a hotel, sold them fast food… anybody who came into contact with Brian and Gabby right up to the point she went missing goes into the suspect list,” said Kolko.

But after a months-long investigation, authorities say the evidence points to Laundrie. They believe he may have even tried to trick law enforcement into thinking Gabby was alive when she was dead already. According to the FBI, there were text messages exchanged between his and Gabby’s phones after her death.

Many want to know, and many are wondering if we’ll ever know what Brian wrote in his confession or what all was in that notebook. “It’s also possible that family members either had access to it or were briefed about what was in that notebook. And they may choose to release that information at a time that they’re comfortable,” Kolko said.

The attorney that represents Gabby Petito’s family, in the statement above, thanked everyone who worked on Gabby’s case and said they were left with no doubt that Brian murdered Gabby.

Yet, the FBI has still not said why Laundried killed Petito. “There’s a wide variety of things that it could have been. So, without talking to Brian Laundrie, and that’s certainly not possible anymore, they may never know the specific motive of why he did what he did,” said Kolko.

The following is a timeline of the investigation: