Multiple tornadoes touched down in Southwest Florida on Sunday morning as severe storms moved across the area.

Lee County officials are providing an update on storm response and recovery efforts. You can watch it in the player below or by clicking here.

Officials in Lee County say about 7,000 homes, or about 15,000 people, are without power due to the storms. They say that so far they have only had four reported injuries. Officials say 28 homes were destroyed in Lee County and at least 62 homes are not livable.

The National Weather Service confirmed that at least one tornado was sighted in Collier County.

Winds from the storms in Collier County knocked over a tractor-trailer as it was traveling along I-75 North, before Mile Marker 96. Florida Highway Patrol says the driver of the truck was injured. The highway has since been cleared.

Florida Highway Patrol tweeted a video of the tornado as it passed over I-75 in Alligator Alley.

Tornado passed over Interstate 75 in the area of the 96 mile marker (🐊 Alley) in Collier County at 9:34am.
Please continue to monitor weather conditions and BE SAFE! pic.twitter.com/bxNqzKbkOE

WINK News viewers shared videos of what appeared to be another tornado that moved through part of Fort Myers.

The Iona McGregor Fire Department says there is significant damage in its service area. The National Weather Service later confirmed that an EF2 tornado touched down in Iona.

#BREAKING 🌪️ Southwest Florida / Iona tornado rated an EF-2. Max wind 118 mph while on the ground for under 2 miles. This is our first local EF-2 in 6 years (Cape Coral – 2016). @WINKNews @spann pic.twitter.com/hYTITBmjsF 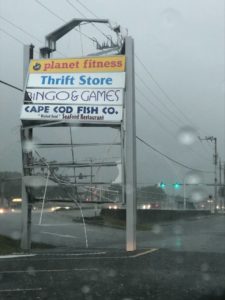 Some mobile homes in Iona were destroyed. The Iona McGregor Fire Department Deputy Chief Khalid Aquil estimates the storms have displaced 150 to 200 people.

In Iona, several homes were severely damaged from the storms that moved through the area Sunday. Those winds also damaged the sign at the Planet Fitness plaza along McGregor Boulevard.

The wind turned over a trailer hitched onto the back of a pickup truck in a nearby parking lot.

Sheriff Marceno asks that you be patient as crews work to clear roadways of the damage from the storms.

The Red Cross says it is working closely with emergency crews on the ground in Fort Myers to provide assistance to those who need it, including helping people who have been displaced find a place to stay.

The Wa-Ka Hatchee Park and Recreation Center in Lee County is where the Red Cross asks you to go there as the first step if you have been displaced or require assistance due to the storms.

The winds in Charlotte County also left a large amount of damage in its wake. Video from WINK News viewer Nicole Conway Coy shows damage in the Village of Holiday Park community.

Charlotte County Public Safety says a number of people have been displaced.

Charlotte County has opened the Ann and Chuck Dever Regional Park Recreation Center for those who need shelter.

Governor Ron DeSantis took to Twitter to offer his prayers for those impacted by the storms. He says the Florida Division of Emergency Management response teams will be available to help.

.@FLCaseyDeSantis and I are praying for the families impacted by yesterday’s severe weather in SWFL. @FLSERT immediately sent a response team and my administration will do all we can to provide resources to families.