Most Wanted Wednesday: We feature some of SWFL’s most wanted suspects; Nov. 24 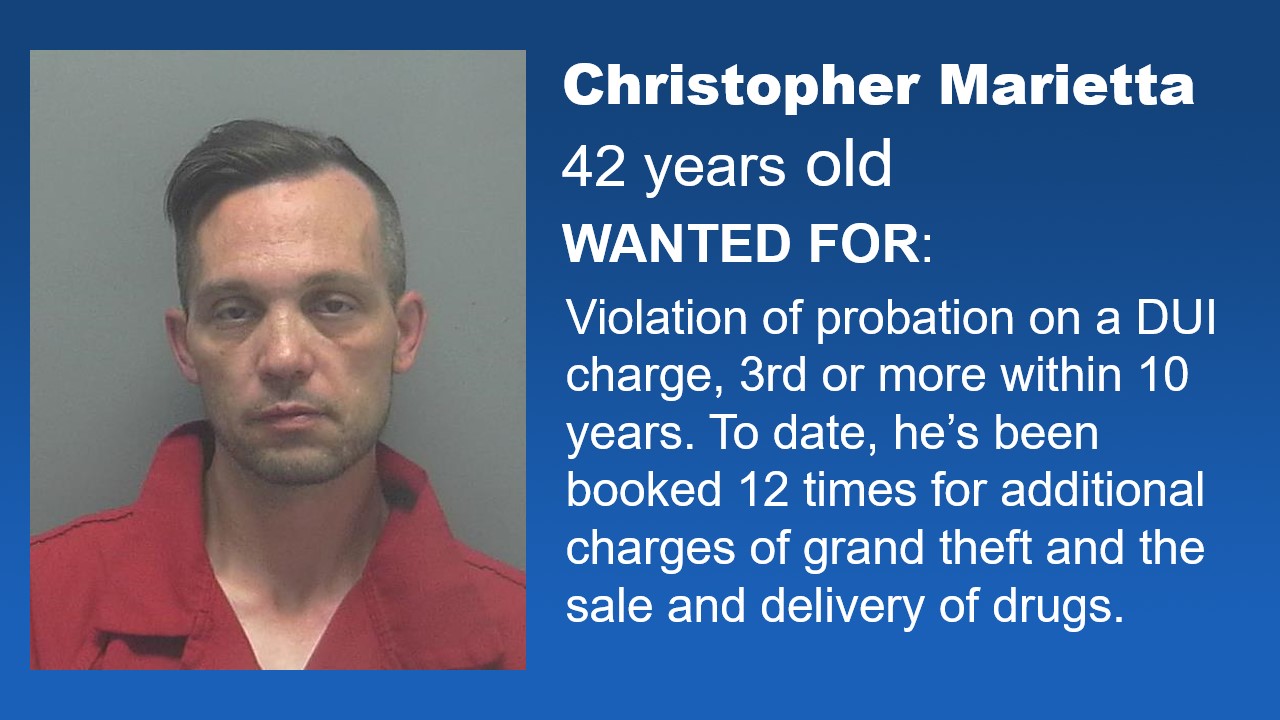 Christopher Marietta (DOB 10/10/79) – wanted in Lee County for violation of probation on a DUI charge (3rd or more within 10 years).

Marietta’s latest problems started when he chose to take off in his car following a domestic dispute. Deputies were able to catch up with him pretty quickly and were able to clear him of any wrongdoing in the domestic incident.

However, they also noticed that he reeked of alcohol, prompting them to conduct a field sobriety test, which he failed. As it turned out, he had a history of DUI offenses.

Additionally, he was also driving, despite the fact his license was revoked by the state. To date, he’s been booked 12 times for additional charges of grand theft and the sale and delivery of drugs.

He is 5’10”, 142 pounds and was last known to be living in Bonita Springs. And upon his arrest, he will be held without bond. 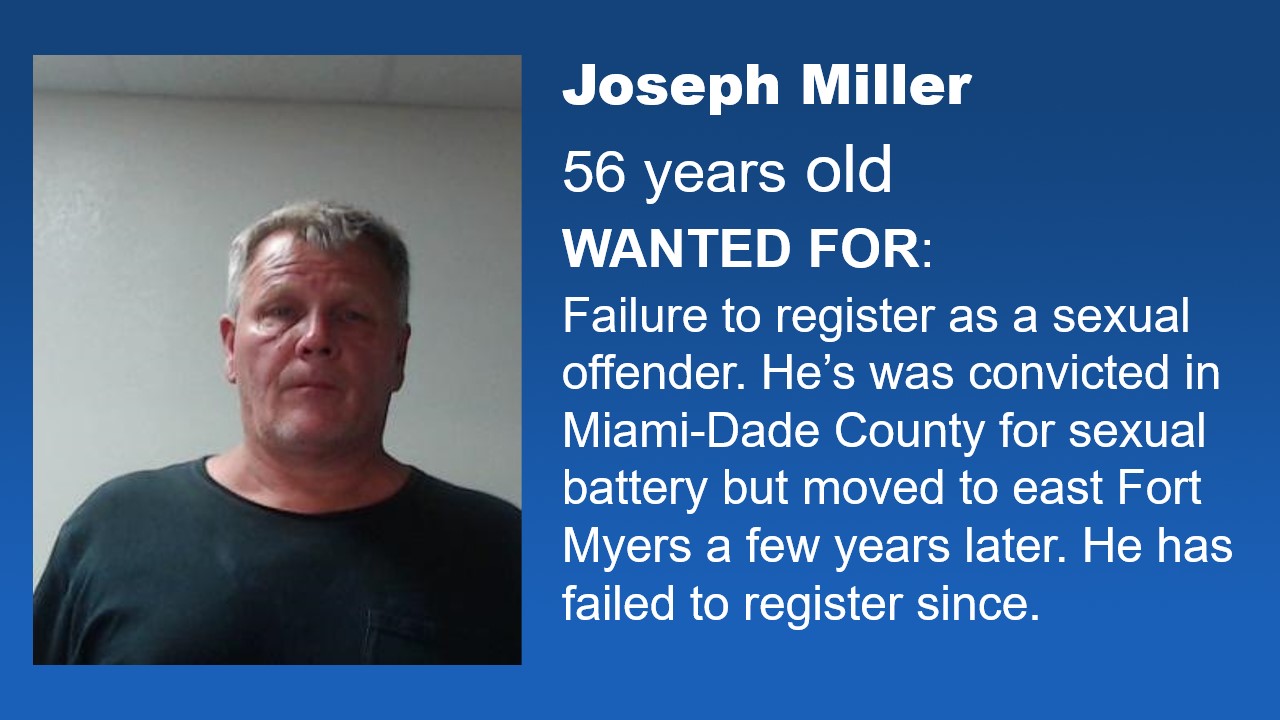 Joseph Miller (DOB 5/18/65) – wanted in Lee County for failure to register as a sexual offender.

He’s was convicted in Miami-Dade County for sexual battery but moved to east Fort Myers a few years later.

As a convicted sex offender, he is mandated to keep tabs with law enforcement and let them know where he’s living. But instead of complying with that order, he has chosen to go off the radar.

In addition to his East Fort Myers address, he also spent some time living in Bonita. He is 5’11”, 240 pounds and has a tattoo of a skull with cobwebs on his right shoulder. 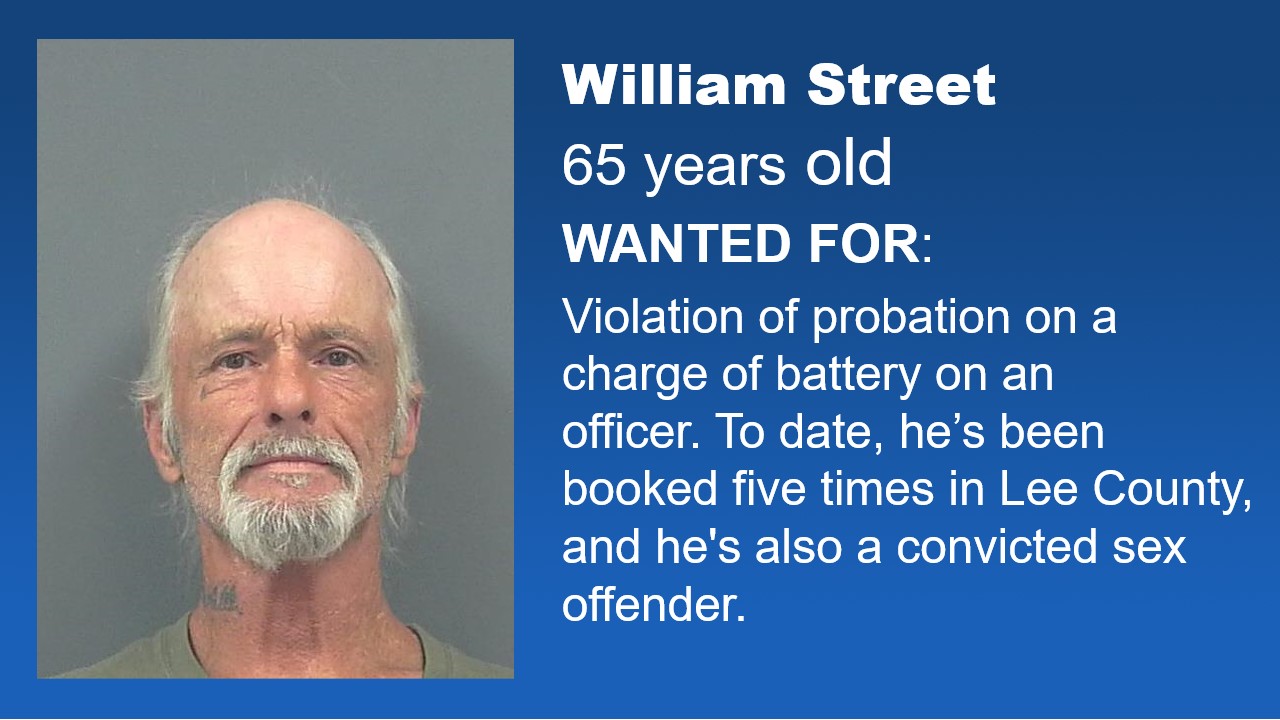 William Street (DOB 11/15/56) – wanted in Lee County for violation of probation on a charge of battery on a law enforcement officer.

Crime Stoppers said he got into a verbal argument with a woman, which escalated to physical violence where Street ultimately punched the woman.

When police arrived on the scene, Street became even more agitated and refused to listen to officers. After refusing to comply with their directives, Street chose to punch one of the uniformed officers.

Once he arrived at the jail, he was also found to be in possession of a baggie of marijuana which he failed to tell officers about.

To date, he’s been booked five times in Lee County. He is also a convicted sex offender out of Pennsylvania after being found guilty of sexual battery on a minor.

He is 5’5”, 135 pounds and has a tattoo of a unicorn and a devil on his right arm, the name Michelle inked on his neck and the moon and stars on his left arm. And upon his arrest, he will be held without bond.