IF YOUR TIME IS SHORT

See the sources for this fact-check

A viral image popular on Facebook claims that the $1 trillion infrastructure bill moving through Washington would establish a per-mile “driving tax.”

The image takes the form of a screenshot of a TV graphic from Newsmax purportedly detailing “Biden tax increases.”

“Per-mile user fee. Estimated to be 8 cents per mile,” reads text on the slide.

“This will be in addition to the already in place fuel tax,” one user wrote in the caption of their post.

The image was flagged as part of Facebook’s efforts to combat false news and misinformation on its News Feed. (Read more about our partnership with Facebook.) 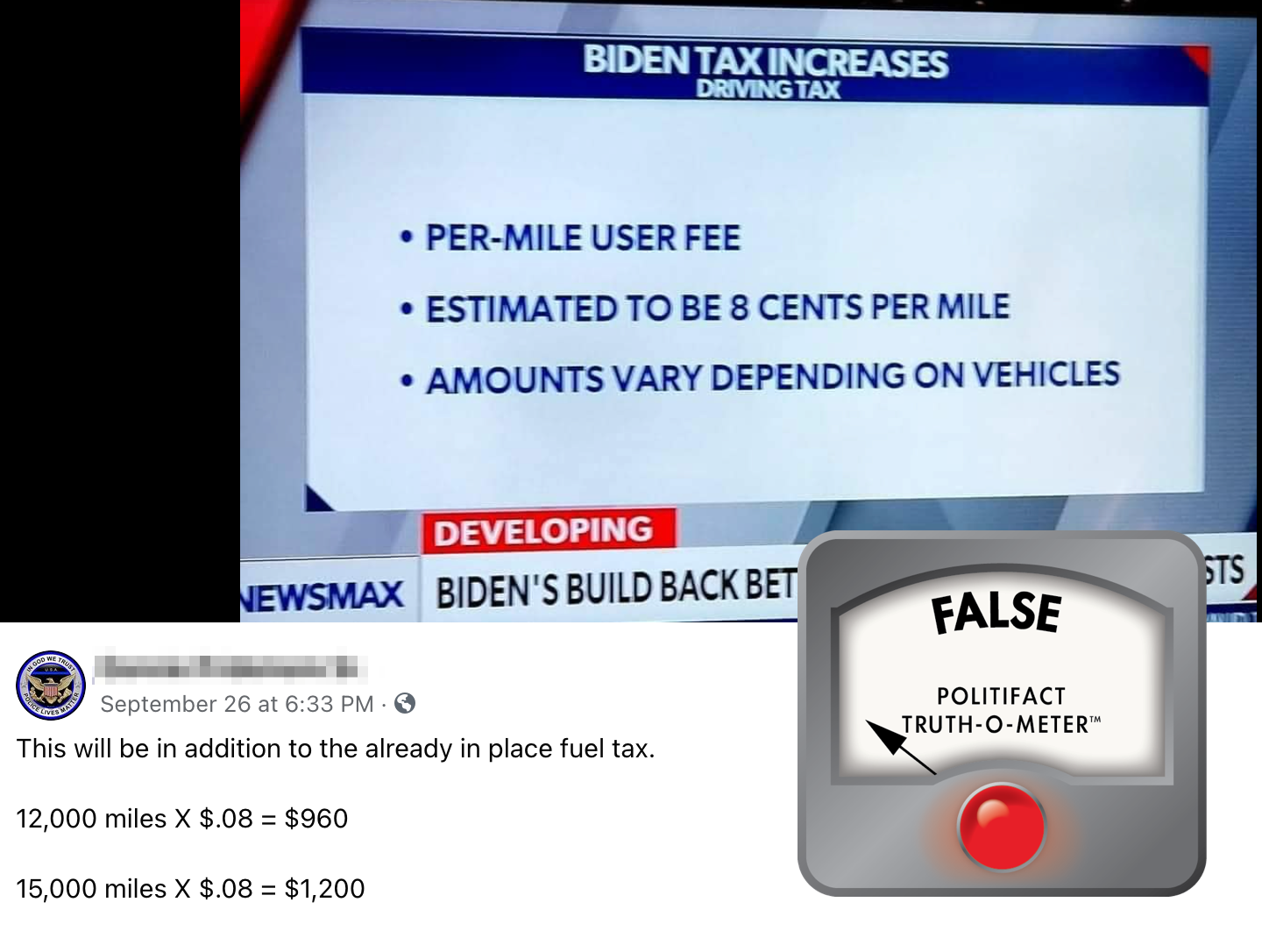 One provision buried in the 2,700-page infrastructure bill supported by President Joe Biden does create a pilot program to study the effects of a per-mile tax.

However, it’s misleading to equate the pilot program with an actual fee.

“The claim is a ridiculous distortion,” said Robert Poole, director of transportation policy at the Reason Foundation, a libertarian think tank.

The purpose of the pilot program would be to test whether a mileage fee would be a viable way to support the Highway Trust Fund in lieu of the current gasoline tax. The fee has long been discussed as a means of replacing the gas tax as the auto industry moves toward electric cars, Michele Nellenbach, vice president of strategic initiatives at the Bipartisan Policy Center, previously told PolitiFact. Some states have tried their own pilot programs.

Participants would record the miles they drive in passenger and commercial vehicles and pay fees based on those miles. Enrollment would be voluntary, and all participants would be fully reimbursed for any charges they pay.

“It is difficult to know how many people will participate, but I would expect in the tens or hundreds of thousands,” said Mariya Frost, the director of the Coles Center for Transportation at the Washington Policy Center, a center-right think tank.

If passed, the program would last from fiscal year 2022 to 2026. Each year, a report would be submitted to House and Senate committees concerning the program’s success at generating revenue and keeping user information private, among other subjects.

“Implementation of any per-mile tax is likely still years away,” she said.

This is inaccurate. The infrastructure bill would create a pilot program that would study the effect and viability of a per-mile driving tax among a group of volunteers. Enrollment in the pilot program would be voluntary, and participants would be fully reimbursed for any fees they pay.

PolitiFact, Per-mile fee would be tested, but no proof plan is aimed at making cars obsolete, Aug. 12, 2021