COVID-19 caused the biggest jump in international mortality rates since World War II, with U.S. men seeing their life expectancy drop by 2.2 years, according to new study from Oxford University. That was the biggest decline among males in 29 countries examined by researchers at the British university.

Life expectancy fell in 27 countries in 2020 as the coronavirus spread, with 11 nations seeing a drop of more than one year for men and eight countries experiencing the same for women, Oxford found. American men had the biggest decline, followed by Lithuanian men, with a decline of 1.7 years.

Although the study didn’t analyze life expectancy by race and income, the researchers noted that U.S. men may have experienced a steeper drop in their expected lifespan due to higher rates of certain medical conditions than men in Europe, as well as uneven access to health care and structural issues such as racism. Experts have long linked such disadvantages to rising inequality in the U.S.

“Recent research from the USA, for example, shows that socially disadvantaged populations such as Blacks and Latinos experienced losses three times higher than those populations with greater vulnerability to COVID-19,” the researchers noted.

Nearly 685,000 Americans have died of COVID-19, according to the Centers for Disease Control and Prevention. That exceeds the number of deaths during the 1918 Spanish flu epidemic in the U.S. 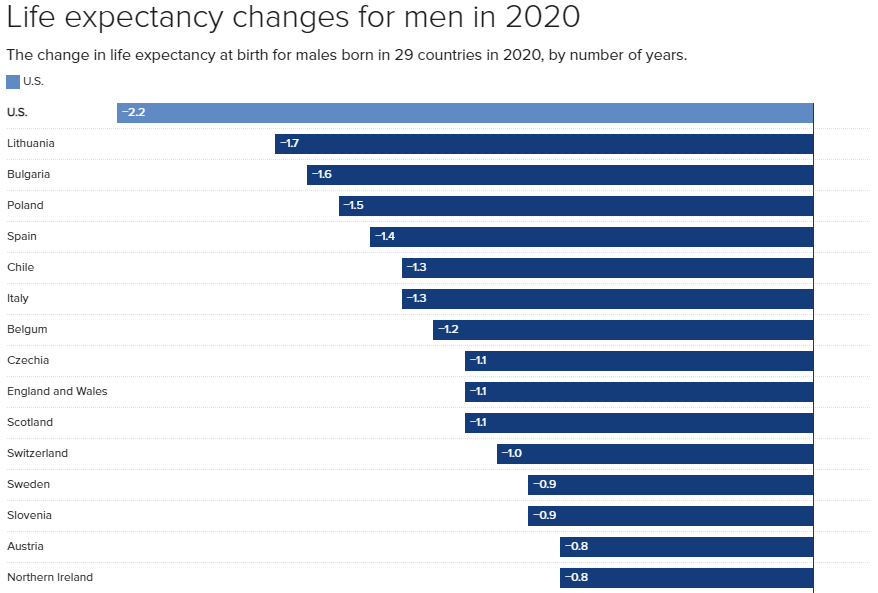 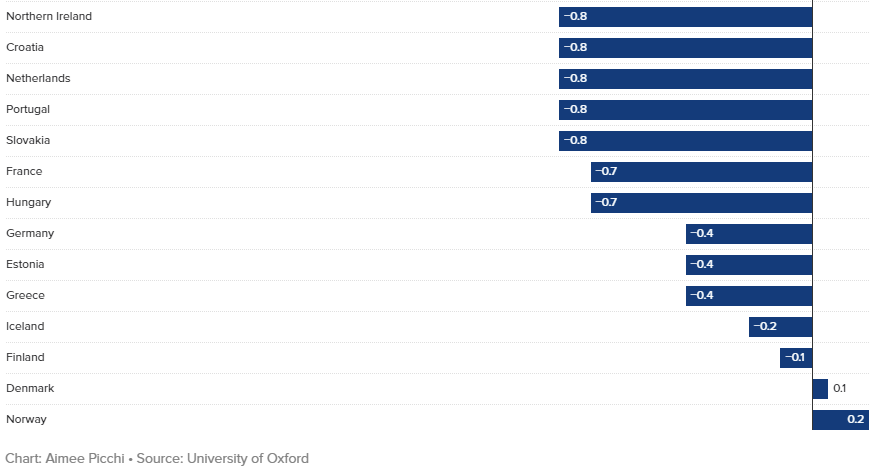 The study results add to CDC findings in July that overall life expectancy for Americans fell 1.5 years in 2020, a figure that includes both men and women. That marked the largest one-year decline since World War II, the agency said. The CDC also found that life expectancy for Black Americans and Hispanic Americans last year fell even more sharply — three years — chiefly because of the virus.

Life expectancy, which estimates the average number of years a baby born in a given year might expect to live, is often viewed as a marker of a nation’s success in providing better standards of living and health care to its citizens. Even before the pandemic, however, gains in life expectancy in the U.S. had leveled off, partly due to slower improvements in old-age mortality, the Oxford researchers said.

In 2020, only men and women in Denmark and Norway, as well as women in Finland, did not see a drop in life expectancy, the Oxford study found.

“Early non-pharmaceutical interventions coupled with a strong health care system may help to explain some of this success,” they wrote of Denmark, Finland and Norway.