Traveling together in a cramped van for four to five months created an emotional strain for Gabby Petito and her boyfriend Brian Laundrie.

That is what Brian Laundrie told a police officer with the Moab Police Department in Utah almost two weeks before Petito’s family stopped hearing from the  22-year-old.

An incident report shows Petito and Laundrie had a public fight on Aug. 12 that caused a witness to call the police.

The incident was labeled by the Moab Police Department as disorderly conduct, and a police officer wrote “I do not believe the situation escalated to the level of a domestic assault as much as that of a mental health crisis.”

The police department helped Laundrie find a hotel to stay while Petito stayed overnight in the van, and instructed the couple to take the time apart to relax their emotions and regain control of their anxiety, according to the incident report.

Petito was crying uncontrollably as she spoke to police, the report states.

The witness reported to law enforcement he saw the couple argue over a phone. He said Laundrie climbed into the van and Petito hitting him in the arm.

It appeared as if Laundrie had locked Petito out of the vehicle and she was trying to get back in, the witness said.

The police pulled the couple over at the entrance of Arches National Park where Petito told the officer the two had been having arguments which led to her struggling with anxiety.

The two told a police officer they “are in love and engaged to be married ad desperately didn’t wish to see anyone charged with a crime,” the incident report states.

Petito’s parents declined to comment on the incident in Moab.

Her stepfather James Schmidt is now in Wyoming, where Petito was last seen, focused on finding her and asking for help.

“We’re pleading with anybody that may have been in the area, that was visiting, if they were taking pictures or videos of what they were doing there and to go back through them and look at them and see if you see Gabby,” Schmidt said.

Schmidt said it’s frustrating that Laundrie is home and Petito is not.

“They released what you could call a statement which is completely unacceptable to us,” Schmidt said of the Laundrie family. “If the roles were reversed, they would want anyone to be providing information.”

The family wants to know how Laundrie could leave Petito behind in the wilderness. The Petito family called Laundrie “selfish and reprehensible.”

Also on Wednesday, the North Port Police Department said they had taken over as the primary investigating agency, in partnership with the FBI since she lived in North Port.

NPPD said they continue to work with the Suffolk County Police Department in New York where Petito was reported missing by her family.

“Several detectives are working around the clock to piece this complex and far-reaching situation together,” said the North Port Police Department’s spokesman.

Petito’s vehicle was found in North Port at her home on September 11th, which she shares with her boyfriend Laundrie and his parents. 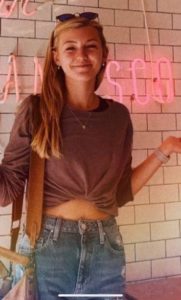 That vehicle was fully processed for evidence along with FBI agents on Tuesday evening.

As of now, Laundrie has not cooperated with the investigation or made himself available to be interviewed by investigators, or provided any helpful details.

Police say they have no information that a crime occurred in North Port.

Laundrie is considered a person of interest in this case, the North Port Police Department said.

“As a father, I can imagine the pain and suffering Gabby’s family is going through. We are pleading with anyone, including Brian, to share information with us on her whereabouts in the past few weeks. The lack of information from Brian is hindering this investigation. The answers will eventually come out. We will help find Gabby and we will help find anyone who may be involved in her disappearance,” said North Port Police Chief Todd Garrison.

Garrison called Laundrie’s lawyer out on Twitter and asked him to set up an interview.

NPPD says they have received hundreds of tips that are being vetted through multiple agencies. If anyone has seen the van photographed and information that might be helpful, call the tip line.

According to her family, they were last in contact with Petito during the last week of August. Prior to the last communication, Petito is believed to have been in Grand Teton National Park in Wyoming. Petito and Brian were traveling in a white 2012 Ford Transit van with Florida license plate QFTG03.

Gabrielle Petito, 22, is approximately 5′ 5″ tall and 110 pounds. She has blonde hair and blue eyes, and several tattoos, including one on her finger and one on her forearm that reads “let it be.”

Additionally, police said they have had a few questions about Gabrielle’s Instagram page being taken down and said they are looking into that. 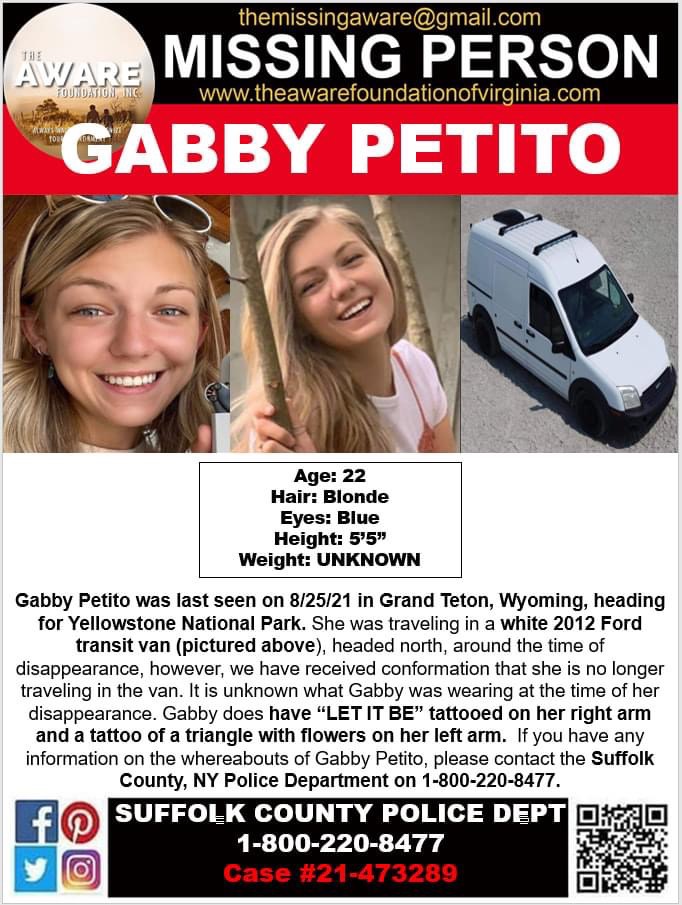