A puppy was saved after an 11-year-old neighbor called 911, telling firefighters there was a dog inside. The family that owns the dog is calling that young girl a hero.

Engines 2 and 3, Ladder 1, Truck 4, Rescues 3 and 4, and Battalions 1 and 2 responded to a house fire and, thanks to the quick actions of Mackenzie Jenkins, 11, they were able to save an 8-month-old puppy named Fiona.

Mackenzie had gone outside to swing when she heard the neighbor’s dog barking and heard smoke alarms going off inside the home. Next, she saw smoke coming from the house. She knew her neighbors weren’t home and that she needed to do something.

“I came outside to play on my swing and then I saw smoke coming out of the roof, and the front door and the bedroom window,” said Mackenzie.

She called 911 and told dispatchers what she saw. “I was like ‘Oh my God what is happening? There are flames coming out of my neighbor’s window!'” she said.

This fire broke out at a home along SE 22nd Street in Cape Coral. “I said ‘my neighbor’s house is on fire’ and then I said the address,” said Mackenzie.

When firefighters were able to get inside, they knew to search for a dog thanks to the information provided by Mackenzie.

Michael Jenkins is Mackenzie’s great-grandfather. “Mackenzie could hear the dog barking so that was her concern,” Jenkins said.

“I was scared. I was mostly scared about Fiona because I didn’t want her to die,” said Mackenzie.

Fiona was unresponsive when firefighters found her, but Lee County EMS cooled her and gave her oxygen. By the time the fire was out, she was up and walking around.

“They just said that they were happy that I saved the house and the dog, because the fire could have gotten worse if I didn’t call in the next five minutes,” she said.

“I was very proud of her. Very proud,” Michael said.

Firefighters presented Mackenzie with a Community Recognition Coin for her actions which not only prevented further damage to her neighbor’s home from the fire but saved their dog’s life. 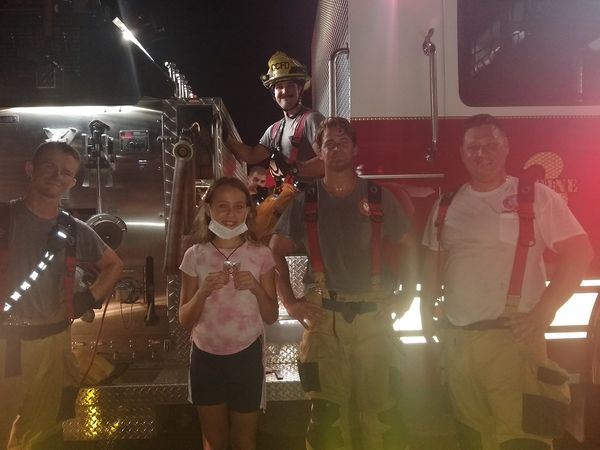 Firefighters told the homeowner that a lithium battery charger is what sparked this fire. That homeowner is so grateful for Mackenzie. She says everything inside can be replaced and that she’s just happy everyone, including Fiona, made it out alive.