How cars — new, used and rental — are putting inflation into high gear

EXPLAINER: Why are fears of high inflation getting worse?

Consumer prices are shooting upward at the fastest rate in 13 years. Driving that surge are — drivers. American motorists and their wheels — cars and trucks; new, used or rented — are a major culprit pushing consumer prices to the breaking point.

The Consumer Price Index for used cars and trucks saw its biggest monthly increase since 1953. That surge alone was responsible for one-third of the increase of the overall CPI. Meanwhile, new car prices continue to climb. The average new car bought in May cost more than $41,000, according to Kelley Blue Book — a jump of over $2,000 from the year-ago period. 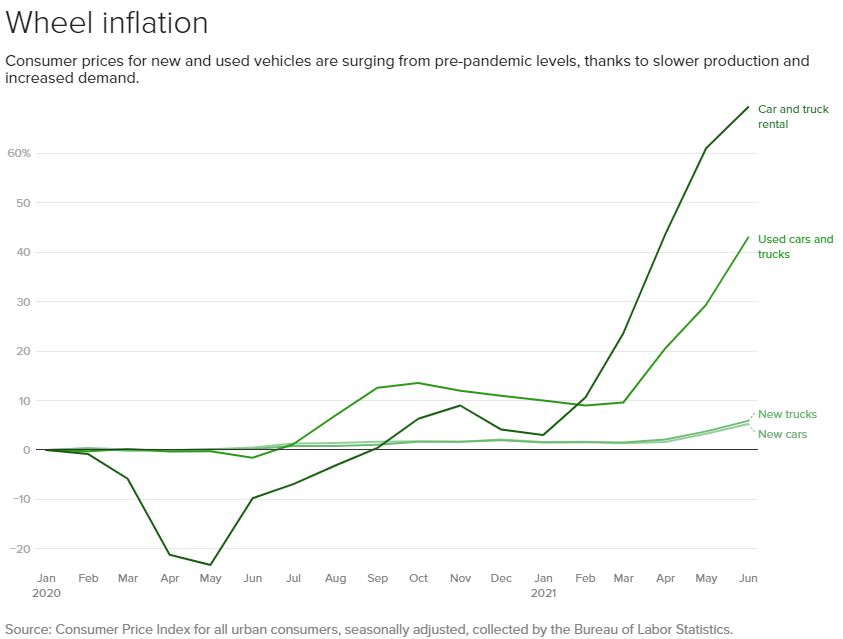 The roots of the new car shortage go back to the pandemic, when automakers slowed production or even shuttered assembly lines, while consumers pulled back on new car purchases. Makers of microchips — a component of everything from cars to smartphones to washing machines — likewise dialed back production, and some shifted manufacturing away from the car market.

That left automakers unprepared when the economy, and buyers, came roaring back.

“It is the major hindrance,” Ivan Drury, senior manager of insights at Edmunds, said of the chip shortage. “It’s so small, but the effect has been so profound.”

To make things worse, a fire this spring at a major Japanese factory that supplies automakers further affected chip production, with the head of VW North America predicting shortages at least until this fall. Ford closed eight North America factories for several weeks this summer, while one GM factory has been closed since August thanks to the shortage.

The crunch has led to some new cars selling at — or above — sticker price. The Kia Telluride, Hyundai Palisade and Ford F250 are some of the more popular models seeing shortages and high prices.

“You’ll go to the dealer’s lot, and you’ll see they have low inventory or none of that Kia Telluride you wanted or that F250,” Drury said.

He added, “You have to really weigh out the benefits. Is that new shiny car worth it to you? If not, don’t worry, someone else will buy it.” 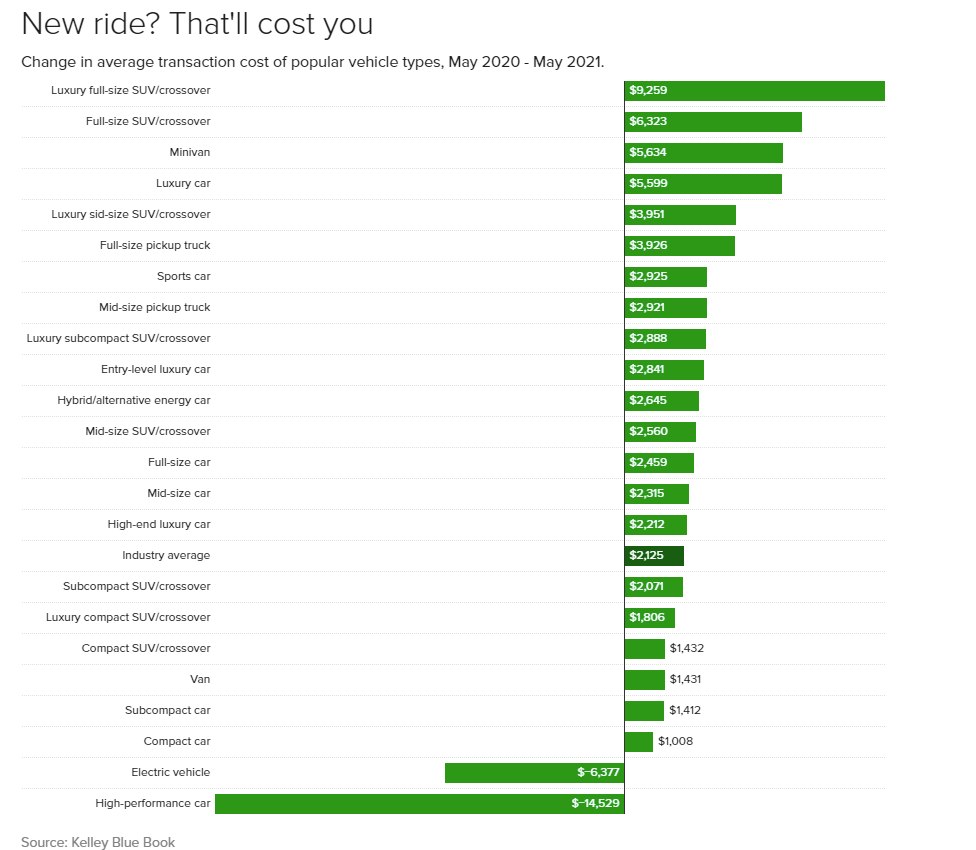 In June, three-quarters of all U.S. cars sold at or above sticker price, the Wall Street Journal reported — more than double the share before the pandemic. Meanwhile, cash-back offers and other incentives are at a 10-year low, according to Kelley Blue Book’s DeLorenzo.

“If you want an SUV or crossover or those types of vehicles, the market is really hot right now,” he said.

High prices and low inventory are starting to discourage buyers, with new vehicle sales falling in May and June. 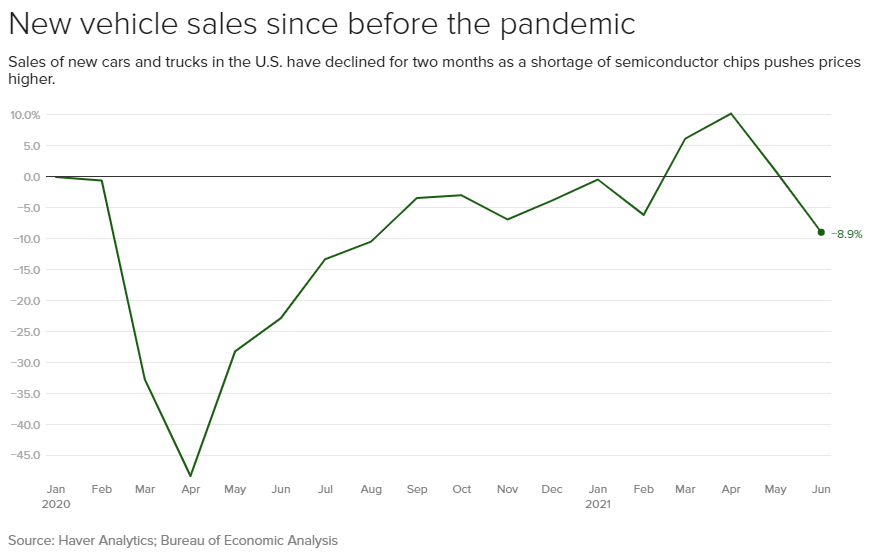 The slowdown in new car production is pushing up prices of used cars, with the average cost jumping to a record $25,410 earlier year, according to Edmunds. Some late-model used cars today are selling for more than when they were new.

“Usually used car people will say, there’s a limit to how much more expensive it can get, because the new car [price] sets the limit,” said Drury. “Now that new cars are selling above MSRP, guess what — used car prices are going up too.”

Rental car companies are typically a reliable source of used cars, as they regularly upgrade their fleets. But after offloading more than 770,000 rental vehicles during the pandemic, according to the Wall Street Journal, many are now trying to rebuild their fleets with late-model used cars, creating more competition for shoppers. And with thousands of Americans ready to travel again, rental car prices are skyrocketing.

Still, there are signs car prices are peaking, even if it’s another year or two before buyers can expect a pre-pandemic level of discounts. Wholesale auction prices for used cars have moderated over the past month, ticking down a percentage point, DeLorenzo said. And Ford this month said it had secured a batch of microchips and plans to start shipping thousands of F150s to waiting owners.

DeLorenzo expects the chip shortage to ease by the end of 2021, as carmakers find new supplies of microchips or start manufacturing them in-house. Many options for getting around the chip shortage—such as changing suppliers, switching factories or building new facilities — take months to implement. That makes it likely some shortages will persist into next year, according to Bain.

For would-be car buyers, that leaves two options. One is to wait — and while you’re waiting, fix up your current set of wheels. That will make driving more enjoyable and increase the car’s value when it’s time to trade it in, said DeLorenzo. But be ready to wait: Although auto factories are expected to start boosting production later this year, it won’t be until 2022 that consumers can expect the deals and discounts of a “normal” car market.

If you absolutely need to get a car, DeLorenzo recommends doing research online before visiting a dealership, “so you don’t get sticker shock.” Dealers won’t be interested in negotiating a lot on price, unless you’re in the market for an electric or hybrid car, which are selling below last year’s prices.

And be picky, Edmunds’ Drury advises.

“Pay whatever you have to pay, but make sure you love that car, that it’s the right color, it has the right features,” he said. If, once prices have come down and you try to sell the car, you’ll lose a lot of money on the transaction.

EXPLAINER: Why are fears of high inflation getting worse?