Most Wanted Wednesday: We feature some of SWFL’s most wanted suspects; June 23

Joey Burnosky (DOB 3/1/94) – wanted in Lee County for violation of probation on charges of robbery.

Witnesses said he walked into a store, grabbed a Twisted Tea, and approached the cashier, demanding all the money from the register.

The clerk was in a state of shock and fear and instead of complying, she locked the register, at which point Burnosky ran out the front door.

The clerk immediately yelled for help, and her manager came running out from the back and tackled Burnosky before he could get away, holding him at bay until deputies arrived to arrest him.

For his failed attempt, Burnosky spent three months in jail and was eventually released on probation – which he violated. He is 5’11”, 160 pounds and upon his arrest, he will be held without bond.

Edward Hornung (DOB 1/15/79) – wanted in Lee County for violation of probation on 13 counts of trafficking in stolen property.

Detectives say Hornung collected brass flower vases from 55 graves, valued at close to $6,000, then sold them off for pennies on the dollar at a local scrap metal shop.

Hornung was quickly identified and arrested for the crimes and was eventually placed on probation. Now, he’s in violation of those terms and is wanted on 13 separate counts of trafficking in stolen property.

In addition to the gravesite thefts, Horning has also been booked for burglary, larceny, theft, and dealing in stolen property.

He’s been jailed in both Lee and Charlotte counties and was last known to be living in Punta Gorda, working at an asphalt company. Hornung, 41, is 6’1”, 210 pounds and upon his arrest, he will be held without bond in the Lee County Jail. 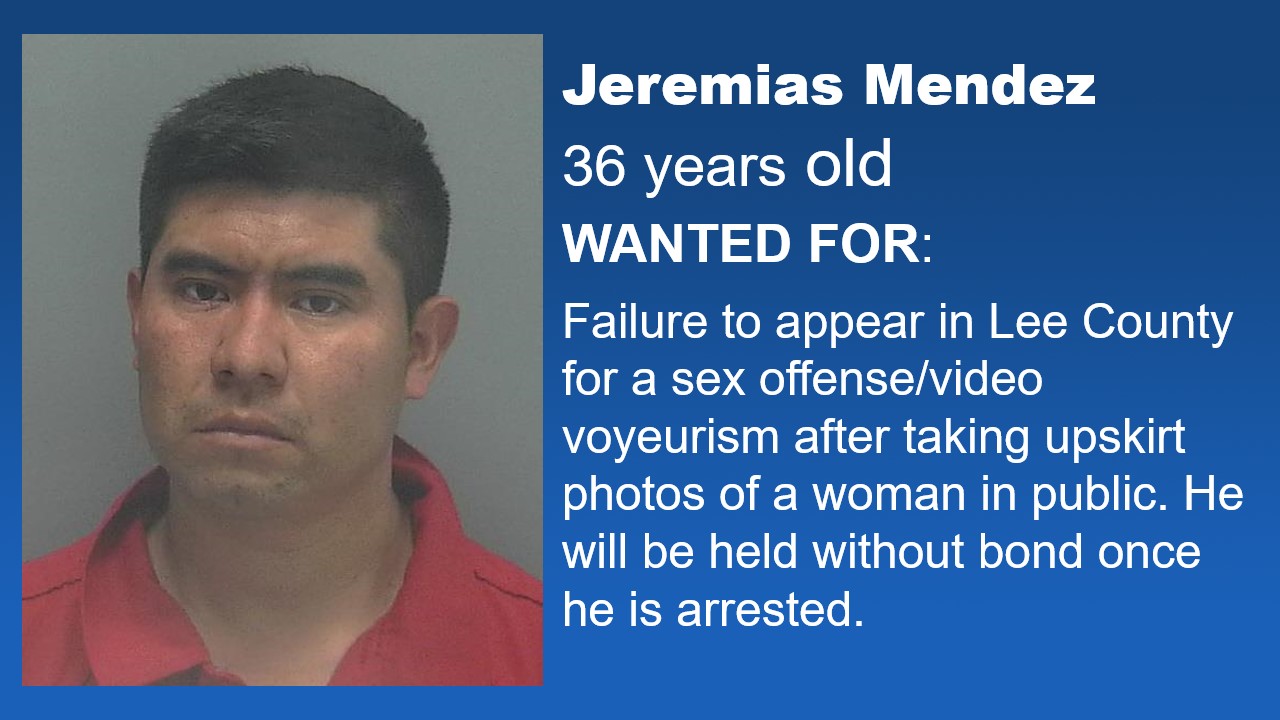 Jeremias Mendez (DOB 1/22/85) – wanted in Lee County on a bench warrant for failure to appear for a sex offense/video voyeurism.

One victim said she was minding her own business and standing in front of a washing machine when she felt something at her feet.

After looking down, she saw a strange man bent over and taking photos up her skirt.

The man immediately started to run away, with the victim trailing right behind.

Fortunately, there were witnesses in the area who were able to detain Mendez until officers arrived to transport him to jail and charge him with video voyeurism.

After his release, Mendez was supposed to show back up in court to explain his actions, but to date, he’s nowhere to be found. Mendez is 5’5”, 140 pounds and upon his arrest, he will be held without bond.