SWFL lacks housing that’s affordable, and that hurts all of us

Southwest Florida has an unwanted title. We’re one of the worst places to find affordable housing in the country. The pandemic only made it worse, exposing low wages, raising home prices, and cutting funding.

For many people, their reality is having to choose between paying rent, paying for food, paying to get to work.

Drew Broderick had to make that choice living in Fort Myers, even while he made $15 an hour working in construction. Now he’s outspoken about finding solutions.

“I was homeless for over seven years. And I had a job the whole time, just couldn’t afford the rents,” Broderick said. “It’s just such a problem, you see it everywhere.”

That problem was finding housing he could afford.

“What we’ve seen as a result of some of our COVID-19 relief programs is, there are a lot of people in our community who are literally two paychecks from disaster,” said Amy Yearsley, the Housing Coordinator for the City of Cape Coral. “You look at the top jobs that are coming in and the top employment growth that’s going to be in the cape coral Fort Myers MSA, the majority of those top 20 jobs make less than $15 an hour. You can’t rent on $15 an hour.”

According to a 2021 Home Attainability study by the Urban Land Institute, the Cape Coral-Fort Myers area is one of the worst in the country for finding a place to live within your budget, especially for renters. It’s been that way for years. 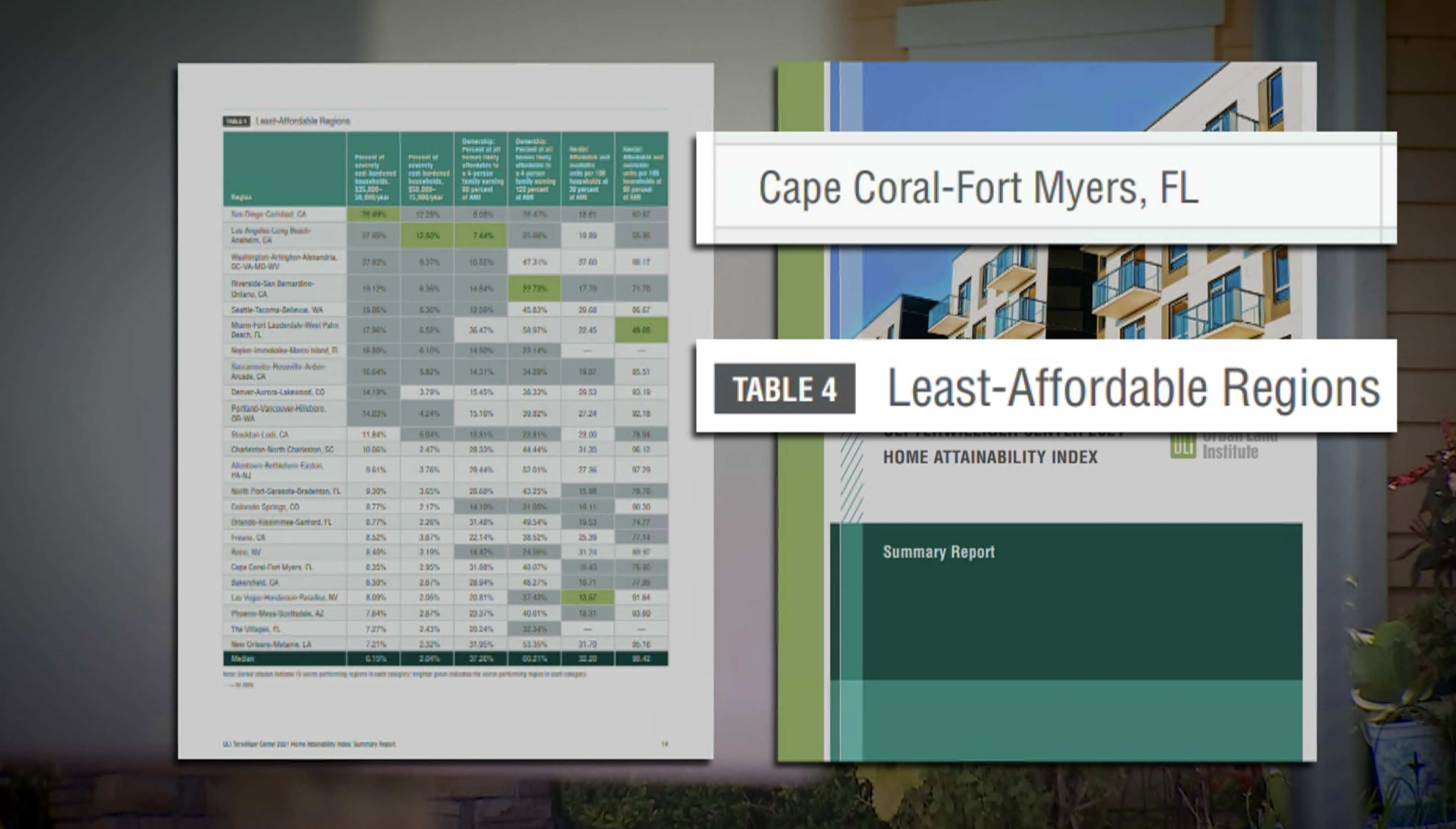 “In Cape Coral, you see it more on the doubling and tripling up to be able to afford the rent of a single-family home,” Yearsley said. “Neighborhoods that have 5, 6, 7 people living in there with 5, 6, 7 cars in the driveway.”

Yearsley says less funding over time has made it harder to manage.

“Florida actually was so on the forefront when they established their housing trust fund, the Sadowski Act put that in place,” Yearsley said. “Since then, last year, we didn’t receive any.”

This year, Florida lawmakers passed Senate Bill 2512, which intends to take away more than half the state’s Sadowski funds from affordable housing for good.

“Without those funds, this project never happens, even when you have the tax credits. The gap is just too big,” said Mike Allan, a for-profit developer and part of Lee County’s Affordable Housing Task Force.

WINK News spoke to Allan at a vacant lot in North Fort Myers, where he hopes to build an apartment complex with 80 units for seniors.

That means too much of their income, 30 percent or more, is spent on housing and utilities, which makes them unstable.

“[The tenants are] police officers, firefighters, first responders, just people in the community, servers at restaurants, and so forth,” Allan explained.

“The community should want affordable housing because they have additional disposable income. So they’re putting it back into the economy,” Allan said. “It allows additional funding for those families to put towards their health as well.”

Otherwise, both Allan and Yearsley say it’s a domino effect.

“If someone has to, you know, live in Lehigh to drive here to work at Target, it’s more wear and tear on the road system,” Yearsley said.

Studies show when families can’t afford it, kids act out in school, the hospital system can get overwhelmed, and ultimately more people end up homeless.

“I see the community being built up in such a way that those who cannot afford will have to move out. That’s called gentrification,” Anderson said.

He regularly comes into contact with people sleeping in cars and tents.

For two years, Anderson and the group Lee Interfaith For Empowerment (LIFE) have fought for a housing trust fund in Fort Myers, hoping to get funding $3 million a year for 10 years.

After a meeting with LIFE in April, the city is now drafting an ordinance in hopes of accomplishing that.

“Finally they heard us,” Anderson said.

The Lee County Commission also accepted $3.8 million in HOME Funds from the American Rescue Plan. According to a press release, the “funds will be used for rental assistance, and to support the construction and rehabilitation of housing.”

And as for Broderick, he has become a homeowner since his time living on the street. Now he pushes for ways to make sure no one else has to go through what he did.

“If I was trying to pay rent, and work three jobs and pay all my income just toward rent and food, I would’ve never been able to climb up the ladder like that,” Broderick said. “So the affordable housing thing is key.”

“The Lee Board of County Commissioners and county staff are fully cognizant of the need for affordable housing, and we work with many stakeholders, programs and citizens toward solutions continuously, recognizing the challenges presented. Affordable housing is a community-wide concern, and we are collectively engaged.”

“I feel confident that the City of Fort Myers is vested in the welfare of all our citizens. The housing market is of particular interest as demand is outpacing supply in most sectors. This offers us opportunities to grow and build a better community. Whether in the areas of ‘affordable’, ‘obtainable’, ‘workforce’, single family, or any other sector of housing, proper planning will require vison and diligence to achieve a healthy balance and sustainable future. Our builders and developers are key to moving forward. The Council and Staff are continually reviewing plans with the goal of raising the quality of life in Fort Myers.”