Florida made headlines around the nation and world for mandating that schools provide in-person instruction during the middle of a pandemic. At a press conference outside Jacksonville Thursday, Gov. Ron DeSantis and Education Secretary Richard Corcoran boasted that this was the right decision for Florida’s children.

“Florida was the leader hands down, no question,” Corcoran said. “The whole world knows it now, at reopening and getting back to normal and looking at the facts and making wise decisions.”

“Every Thursday since a year ago March, I speak with a superintendent outside of Chicago and a superintendent in California, and they just could not believe the opportunities for our kids, be it sports or theater, be it our academic competitions,” said Superintendent Kamela Patton of Collier County Public Schools.

Contrast that approach with what was happening in Michigan, where parents held public protests in August to allow children to return to class and play sports. Florida looked and felt like a different world to the rest of the nation.

The WINK News investigative team sought to compare COVID-19 case spread data among 5-year-olds to 18-year-olds in Florida versus states that did not immediately restart in-person learning.

However, due to limitations in which other states store and keep data, the analysis was limited to a comparison between Florida and the state of Michigan.

Between the months of August and December in 20202, cases in Michigan per 100,000 among 5-year-olds to 18-year-olds were lower in general than in the state of Florida until the month of November. A spike among cases in that population occurred in November 2020 and then dropped again in December. A similar spike happened in Florida in the month of December. 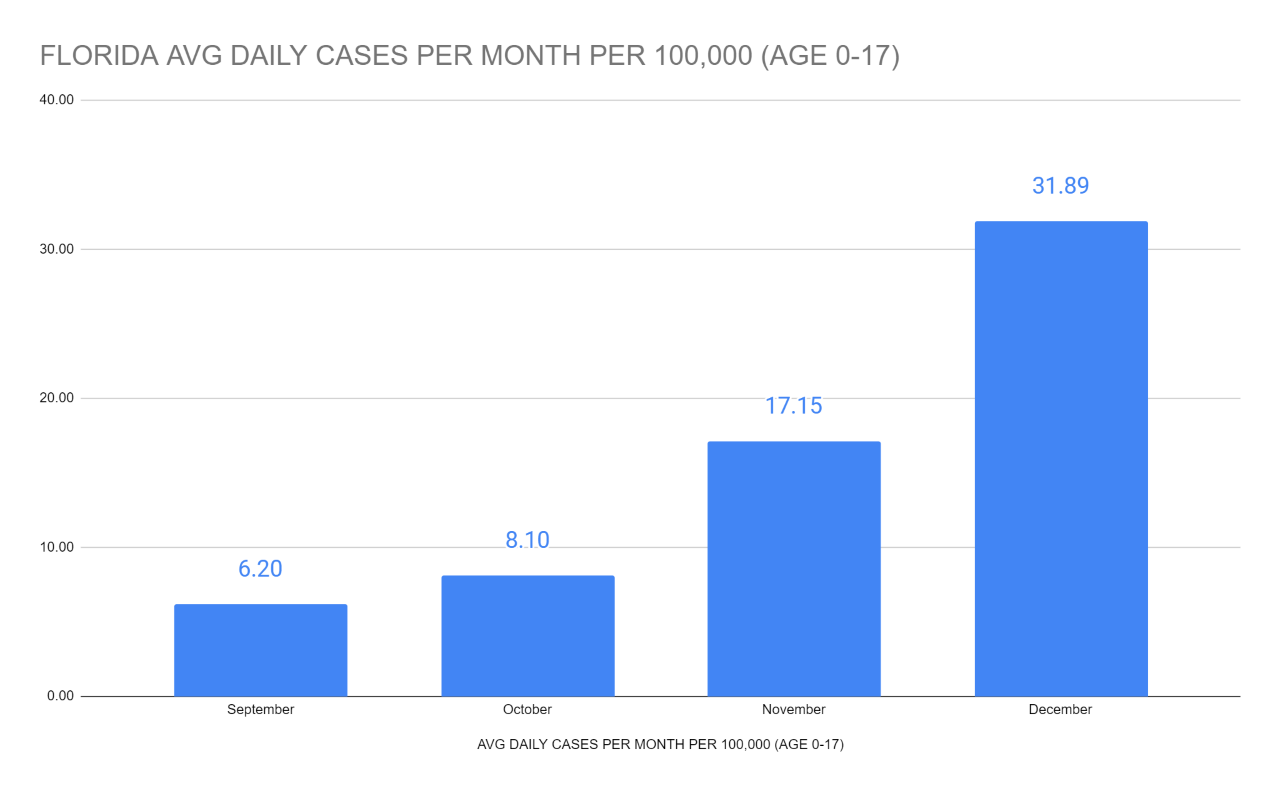 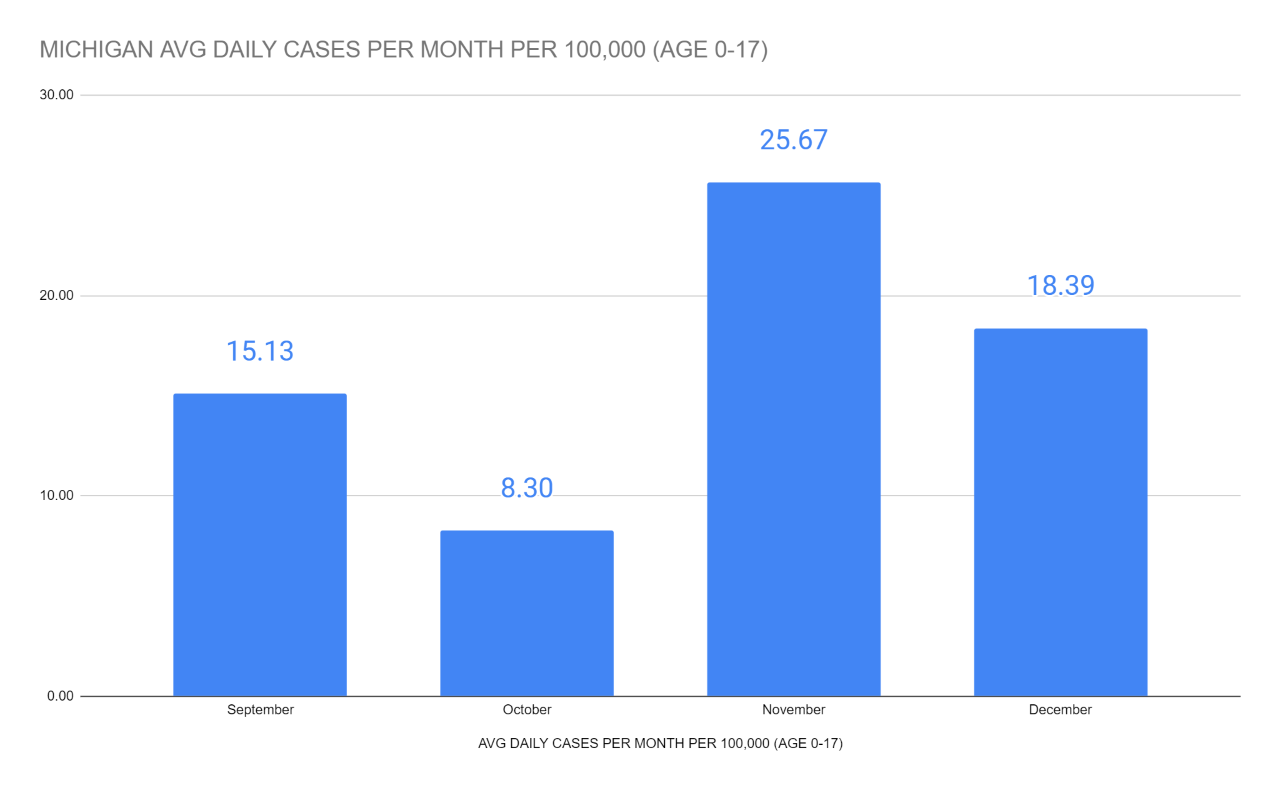 “When we tended to see that spike is the same time we saw the spike in community spread at large,” said Dr. Jason Salami, an epidemiologist with the University of South Florida who is part of the COVKIDS tracking project.

Dr. Salami cautioned against state-to-state comparisons that just look at case spread because of other factors such as climate and population. He and his collaborators have instead been using a metric of pediatric hospitalizations.

But Salami also cautioned that any comparisons being made now are very rudimentary because no two states keep and organize their data the same way.

“If we don’t learn our lesson from data infrastructure and coming out with a standard rubric that everybody follows, abides by and releases their data in the same manner, and we compile it at the national level … If we don’t learn that lesson, oh, my God,” Salami said.

Anecdotally, Patton said Collier County Public Schools did not see huge outbreaks of sickness or hospitalization among their students and staff.

In March, the Centers for Disease Control and Prevention used Florida schools as its point of reference to make recommendations about COVID-19 cases spread in schools. The CDC looked at cases in Florida during August through December 2020 and found that, among all cases reported among school-aged children, less than 40% were school-related.

“The mitigation strategies that were being implemented in the school setting seemed to work,” Dr. Salami said. 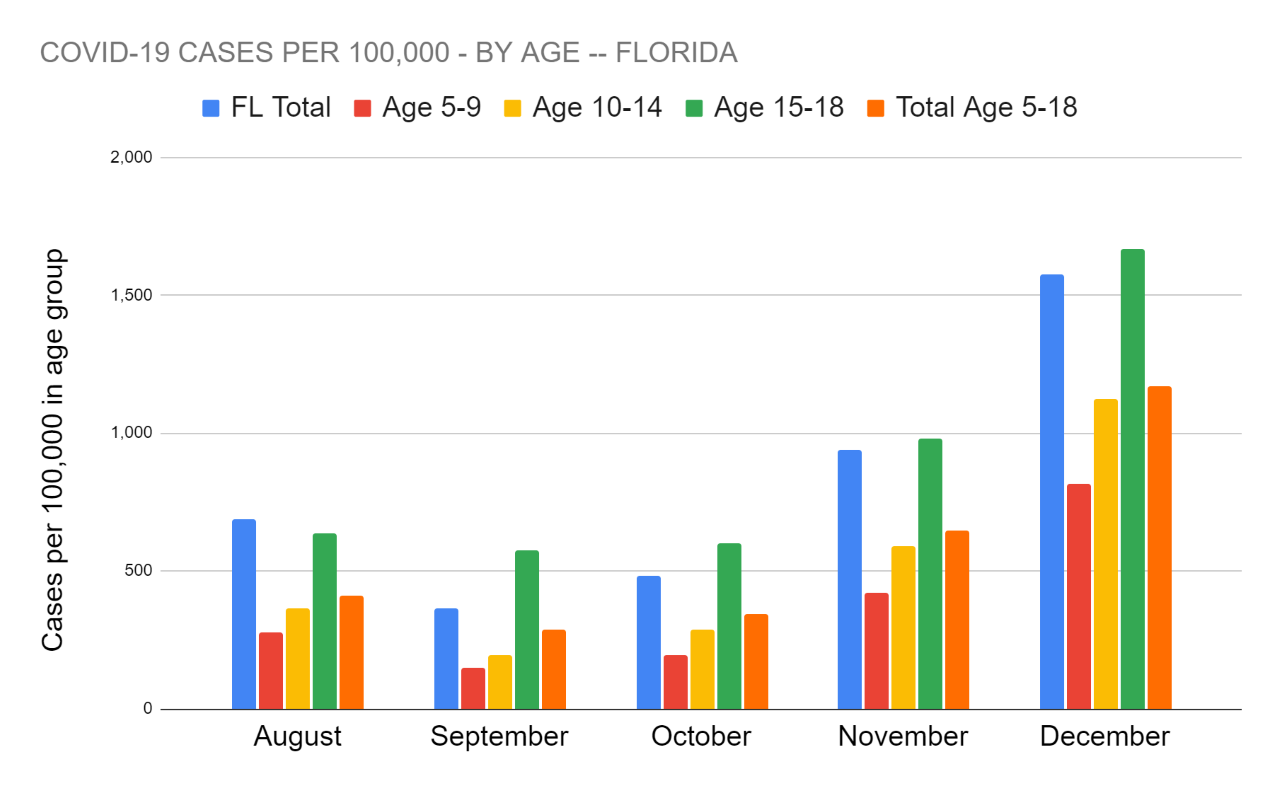 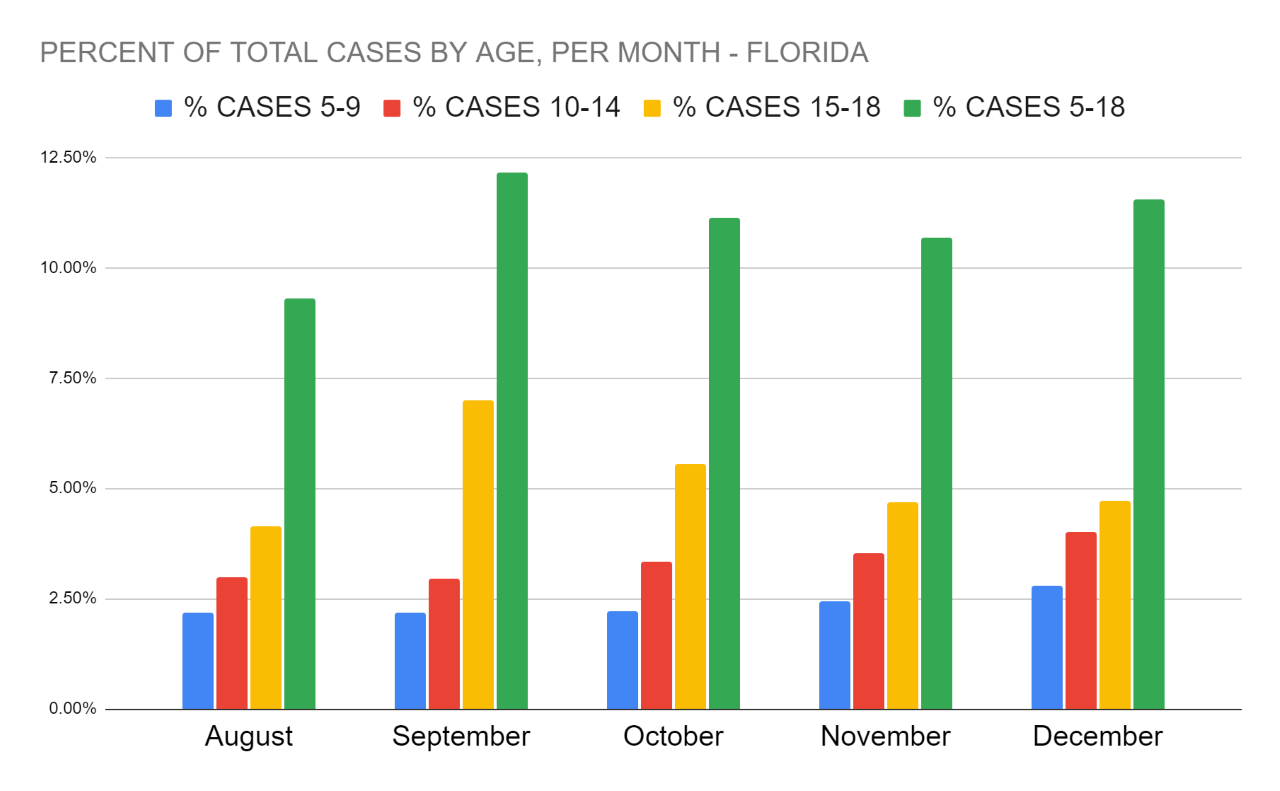 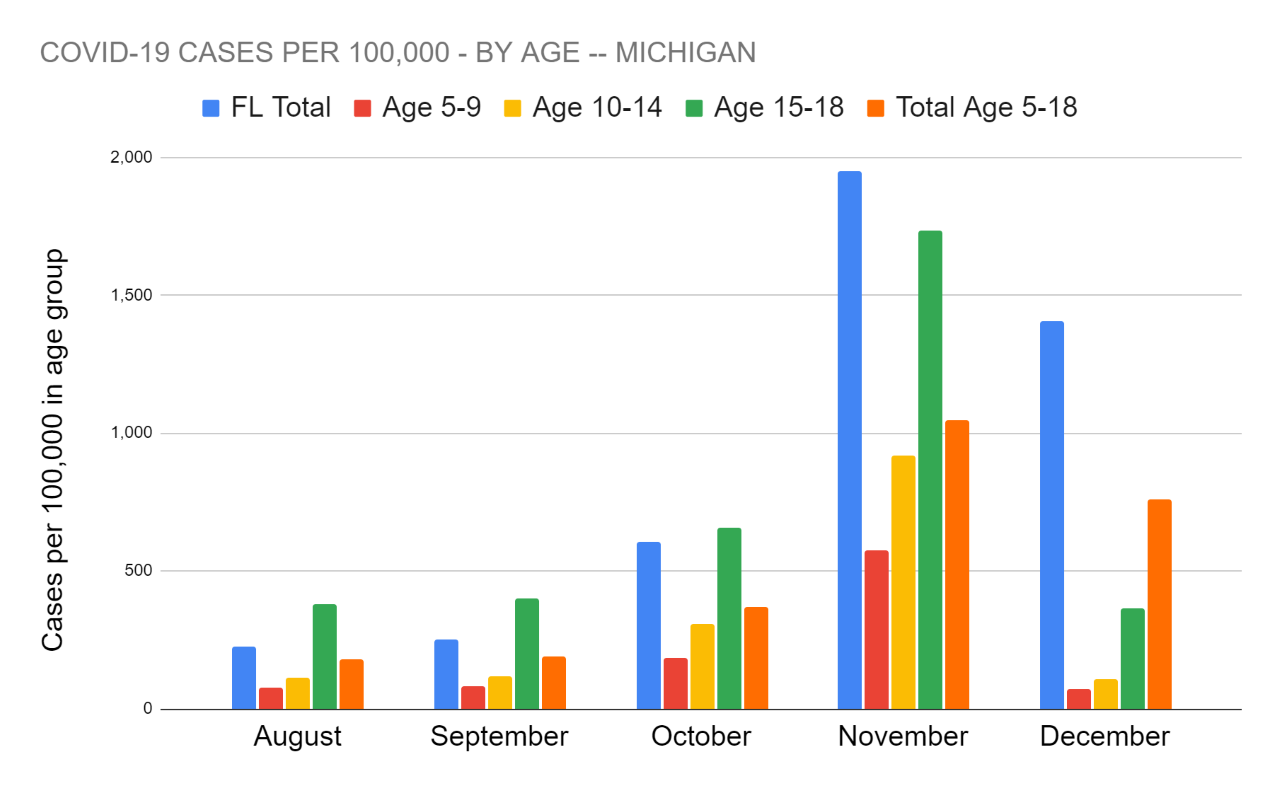 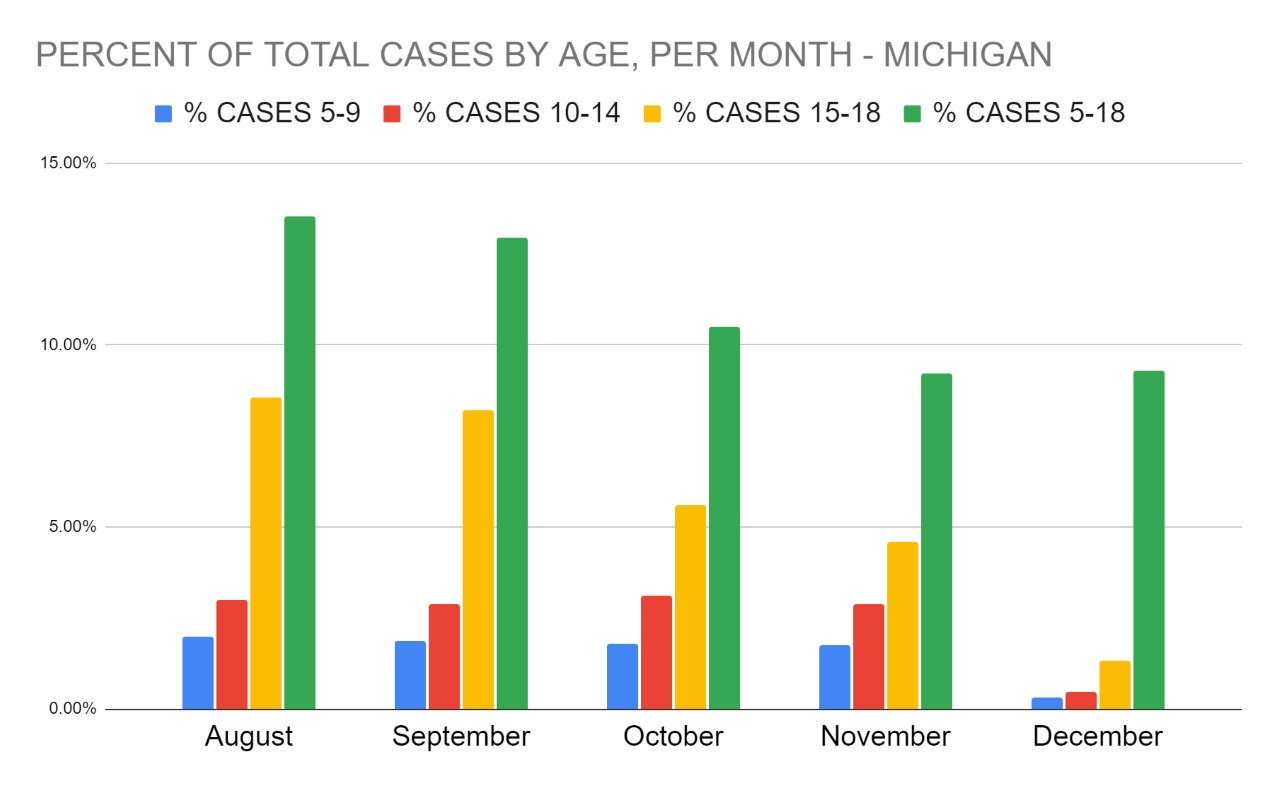 Francesca Davito, a Naples mother of four, said her family did not contract the virus throughout the school year despite her two older children returning to campus in the middle of the fall semester.

Davito, who has lupus and a pulmonary condition, said her older children were falling behind when they were learning remotely.

“I had to weigh out the pros and cons,” said Davito, who is now fully vaccinated. “I asked my rheumatologist, my cardiologist, I said, ‘This is a lot, and I understand that I’m high-risk, but I’m not willing to watch my children mentally suffer. What precautions do we take?'”

Davito said, in hindsight, sending her kids back in person was the right call because her children regained some of what they lost. She said she is grateful she lived in a state where she had that choice.

Testing metrics used to determine student success will not be available until mid-summer, but Patton said social and emotional gains will be the true measure of success for students who were allowed to return to school in person sooner than others.

The epidemiological impacts of those decisions might be more difficult to track.

“Looking back in the rearview mirror, I think it’s something we’ll be doing for years on end,” Dr. Salami said. “And I hope we do it and the way in which we collect data and are able to use evidence-based decision-making, that should improve the next time something like this rolls around.”