Most Wanted Wednesday: We feature some of SWFL’s most wanted suspects; May 19 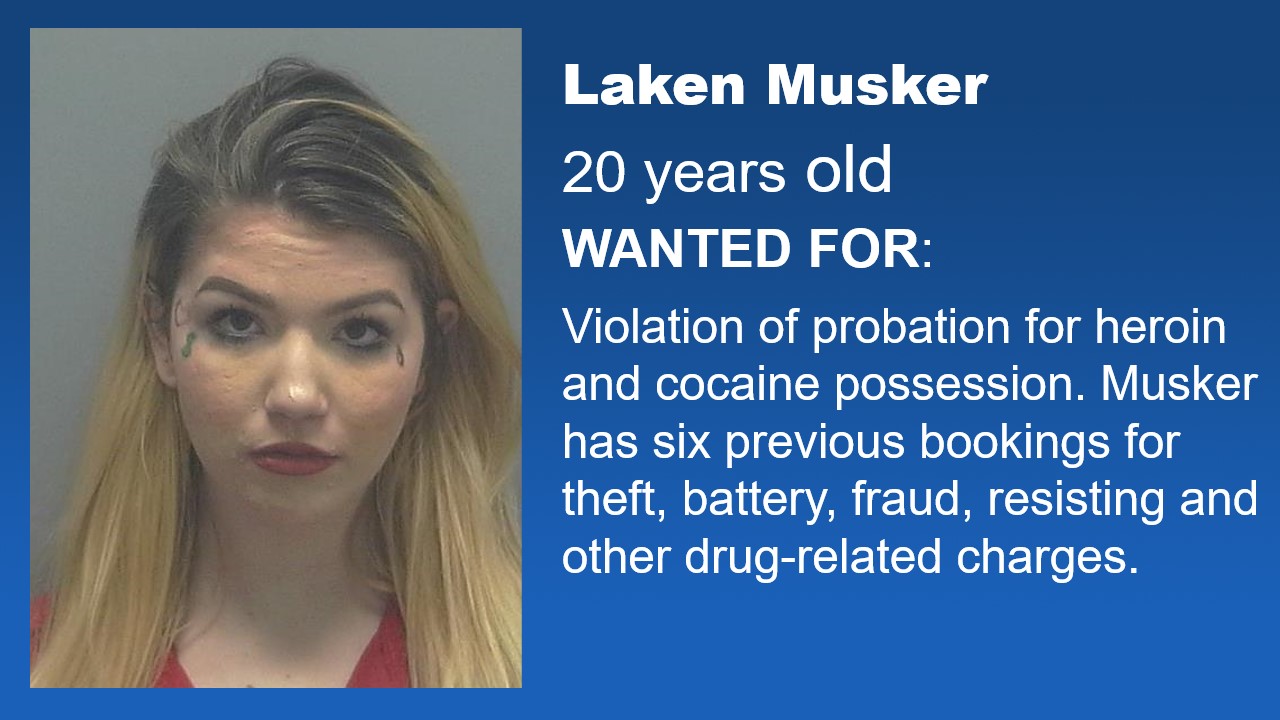 Laken Musker (DOB 11/22/00) – wanted in Lee County on four active felony warrants for violating probation for the possession of heroin and cocaine.

She’s been on the run for about a month and a half now on the drug charges. Musker has six previous bookings in Lee and one in Hendry, for theft, battery, fraud, resisting and a multitude of drug-related charges.

SWFL Crime Stoppers asked the public last year for the identification of a suspect who was using a stolen credit card at local Walmart stores, and they quickly received numerous tips naming Musker as the suspect.

Now they’re hoping for the same result again with tips helping us track her down.

She was last known to be living in Southwest Cape Coral. Musker is 5’6”, 106 pounds with a tattoo of a flower on her right leg and a heart and money sign on her face. Upon her arrest, she’ll be held without bond. 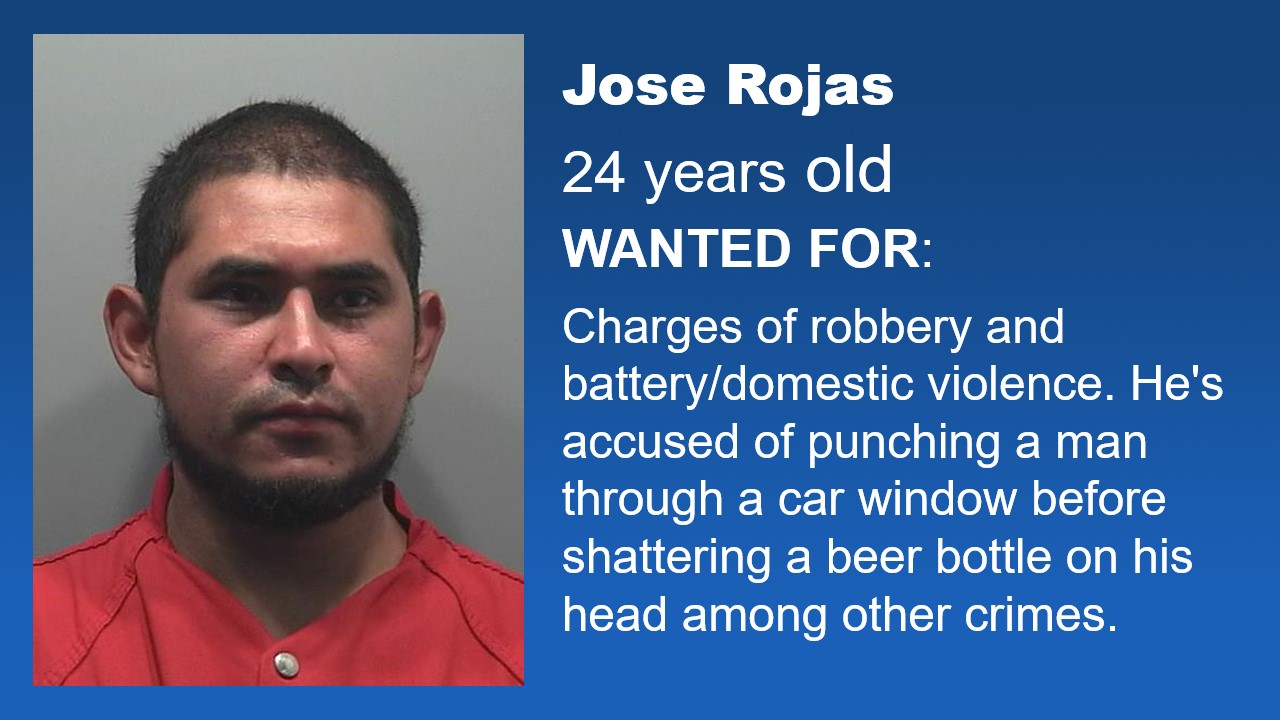 The victim in this case was in a vehicle when Rojas allegedly approached him and started hitting the victim in the face through a partially opened window, which shattered.

After the victim said Rojas briefly retreated, he came back with a Corona beer bottle that he shattered on the victim’s forehead, leaving him bloodied and bruised, with both eyes swollen, and requiring more than a dozen stitches.

According to the victim, the altercation all stemmed from issues about a woman. The second half of his warrant, the robbery charge, is from an incident last month when he went to a female victim’s motel room, caused a disturbance, and then snatched a gold chain from her neck, which belonged to the victim’s deceased brother

Rojas currently has three active warrants for his arrest, with the two additional being bench warrants for felony battery and driving with a suspended license. He is 5’6”, 200 pounds and was last known to be living in North Fort Myers. 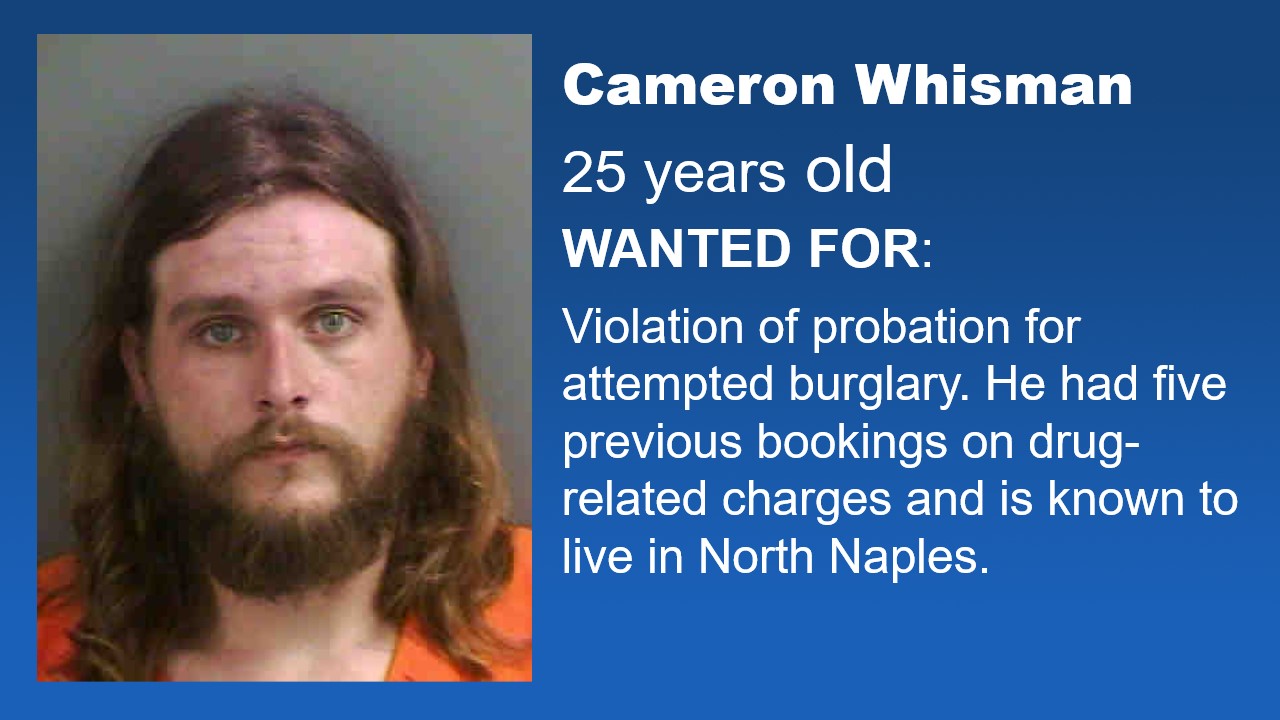 Cameron Whisman (DOB 6/7/95) – wanted in Collier County for violation of probation for attempted burglary of an occupied conveyance.

This guy has five previous bookings in Collier County for various drug charges, as well as driving with a suspended driver’s license.

He was last known to be living in North Naples, but also has connections to the Vero Beach area.

Whisman worked locally as a landscaper, as well as in the foodservice industry. He’s been on the run since mid-April and was supposed to be on state probation until October of this year, but with this latest violation, his term will likely be extended. He is 6’2”, 180 pounds.

Two more arrests have been made shortly after these suspects were featured on Most Wanted Wednesday.

William David – was wanted in Lee County for DUI, 5 counts of DUI with property damage., 3 counts of leaving the scene of a crash, and driving while license suspended or revoked (third or more).

Eric Armas  – was wanted in Lee County for violation of probation on a grand theft charge. This warrant stems from an incident where he was in the ER of a local hospital and decided to raid a hallway storage closet, stuffing forceps, a headlamp and urine specimen cups down his pants, before trying to sneak out.