At 11 p.m. Sunday, doppler radar indicated that Tropical Storm Eta had made landfall on Lower Matecumbe Key as a strong tropical storm with max sustained winds of 65 mph.

With the latest advisory, Eta maintains strength. The center is approximately 30 miles east-northeast of Marathon, Florida.

The latest track brings Eta into the Florida Straits the rest of today where it’s expected to become a hurricane. By tonight, Eta will bend westward and cross near the Florida Keys, and to the south of Southwest Florida. 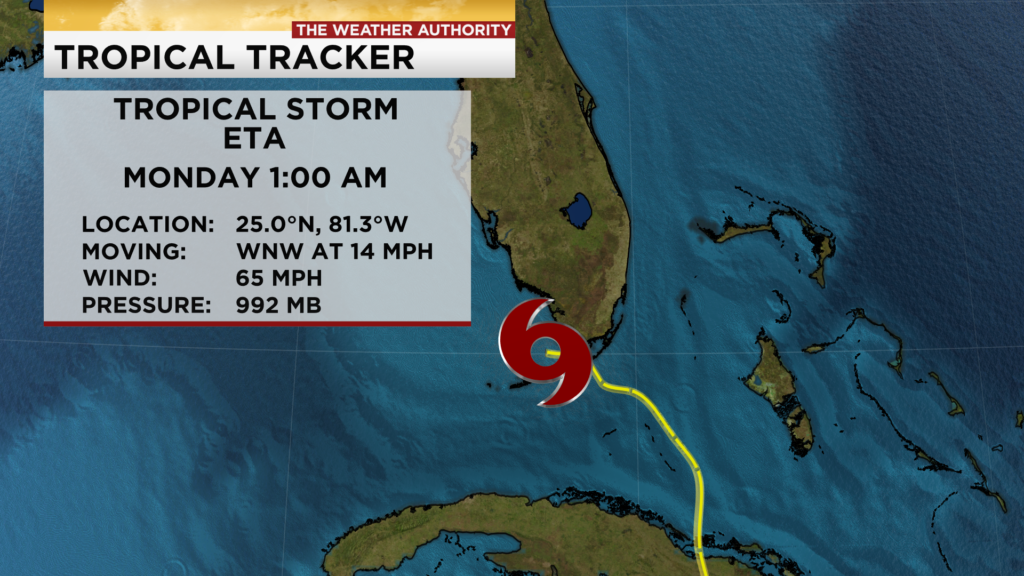 By Monday afternoon, Eta is forecast to be near the Dry Tortugas. After that, the forecast track is highly uncertain, with Eta expected to meander in the eastern Gulf of Mexico, with a slow northward drift through Friday. 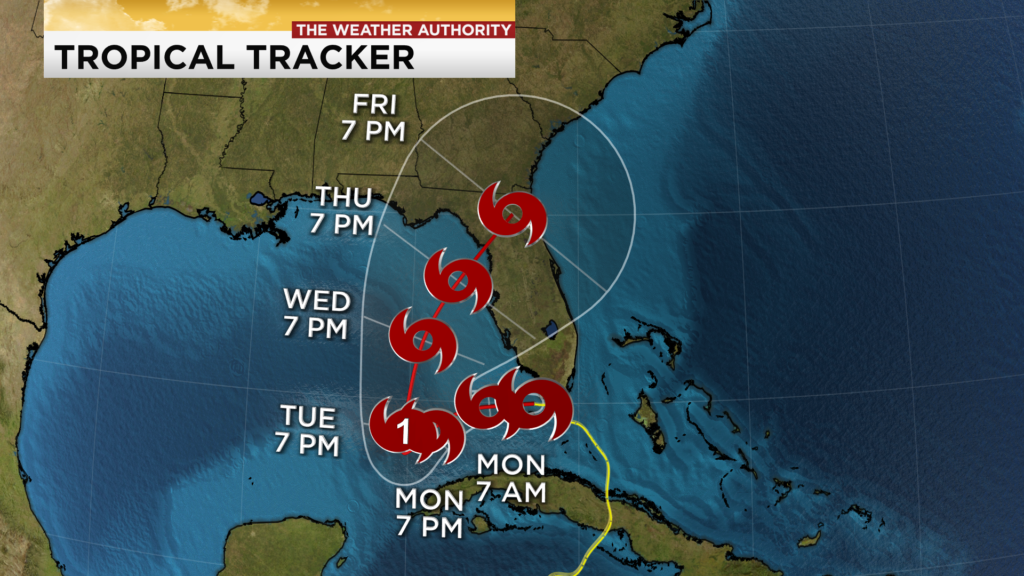 In the meantime, with Eta expected to pass very close to SW Florida, direct impacts can be expected. The main threats are flooding rain and sporadic power outages, with the worst weather occurring Sunday night into Monday. 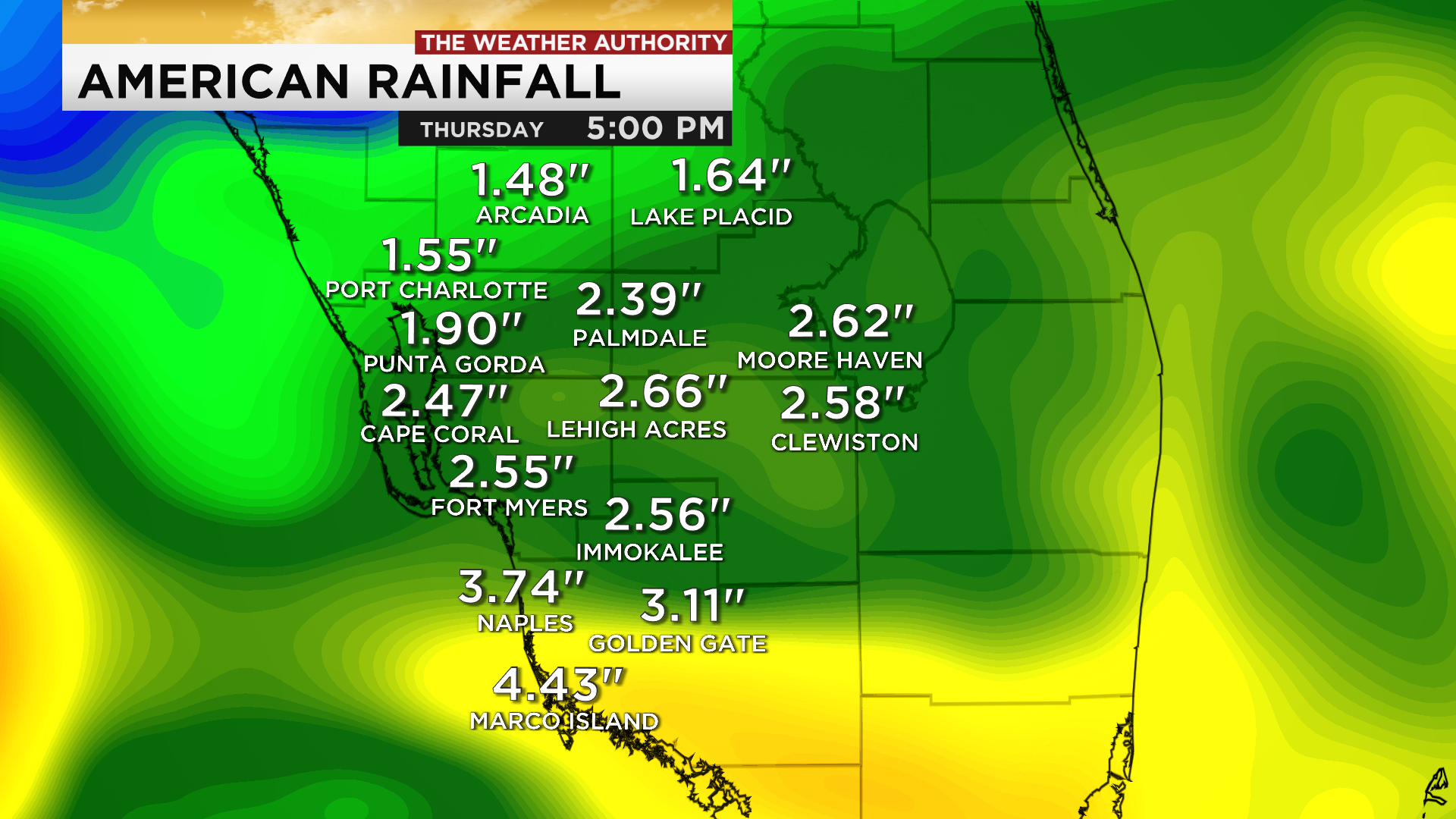 In terms of rainfall totals, we’re expecting widespread totals of 2 – 4 inches of rain across Southwest Florida, with isolated amounts as high as 5″ are possible. Localized street flooding is possible in low lying areas. 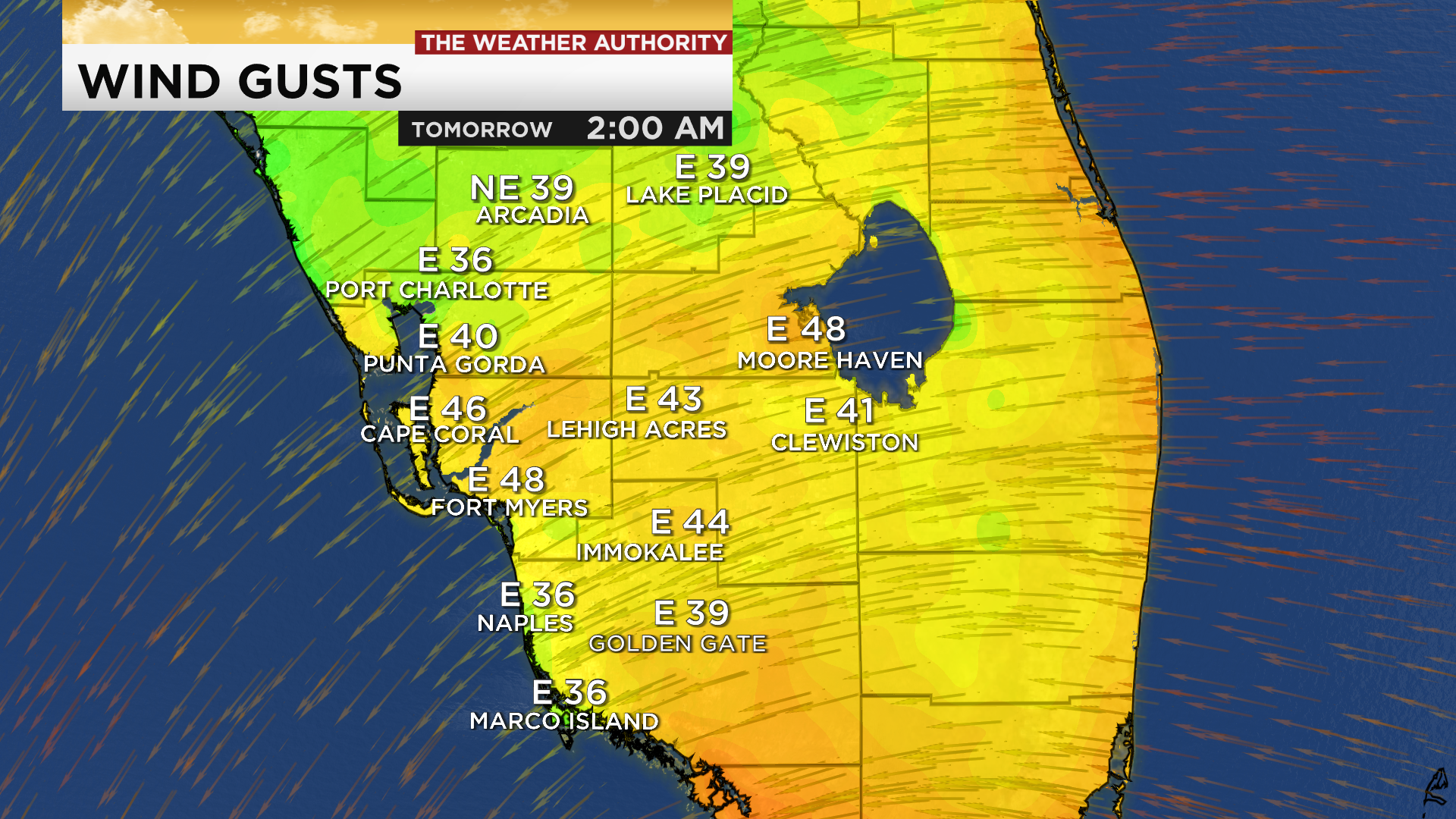 As far as wind is concerned, we’re calling for sustained winds of 30 – 40 mph, gusting as high as 50 mph. This can cause sporadic power outages, knock down trees & large branches, and blow around outdoor furniture and Christmas decorations. It wouldn’t be the worst idea to check your generator today. 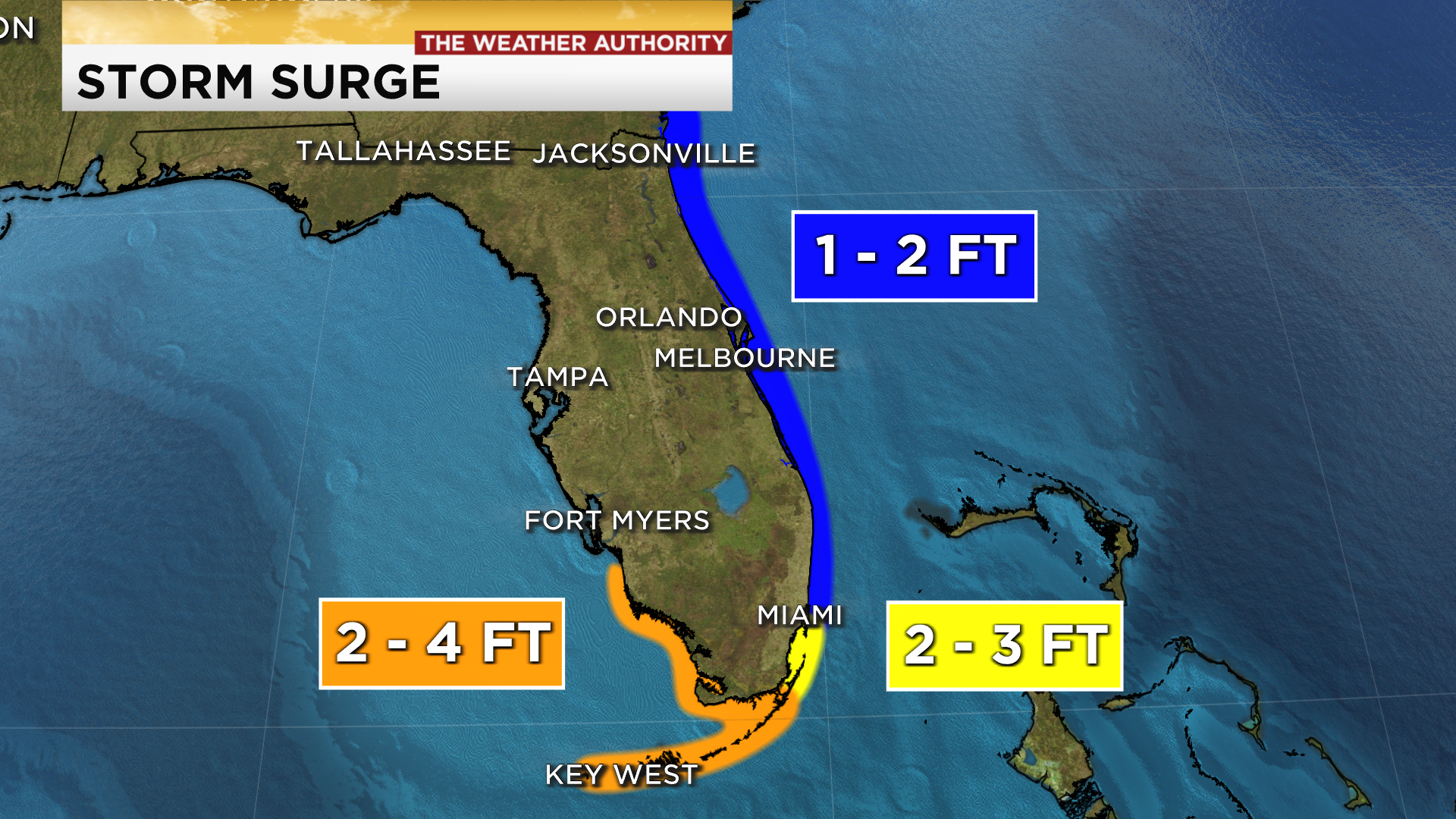 The combination of storm surge and high tide will allow for water levels to peak at 2 – 4 feet from Bonita Beach, Florida to Card Sound Bridge. This includes Bonita Beach south for coastal Collier County. 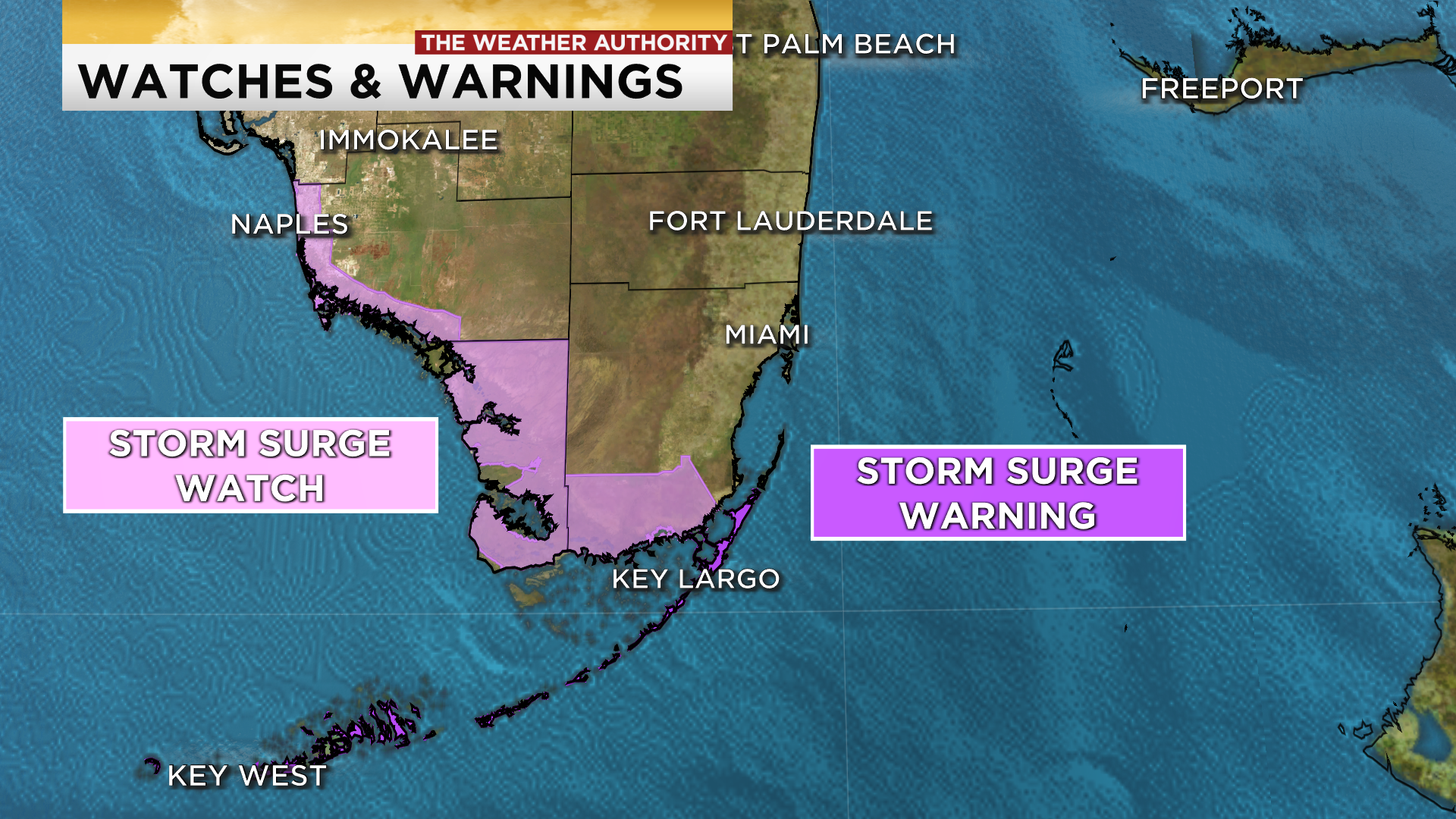 A Storm Surge Warning is in effect for the Florida Keys from Ocean Reef to the Dry Tortugas, including Florida Bay.

A Storm Surge Watch is in effect for the Florida coast from Bonita Beach to Card Sound Bridge. 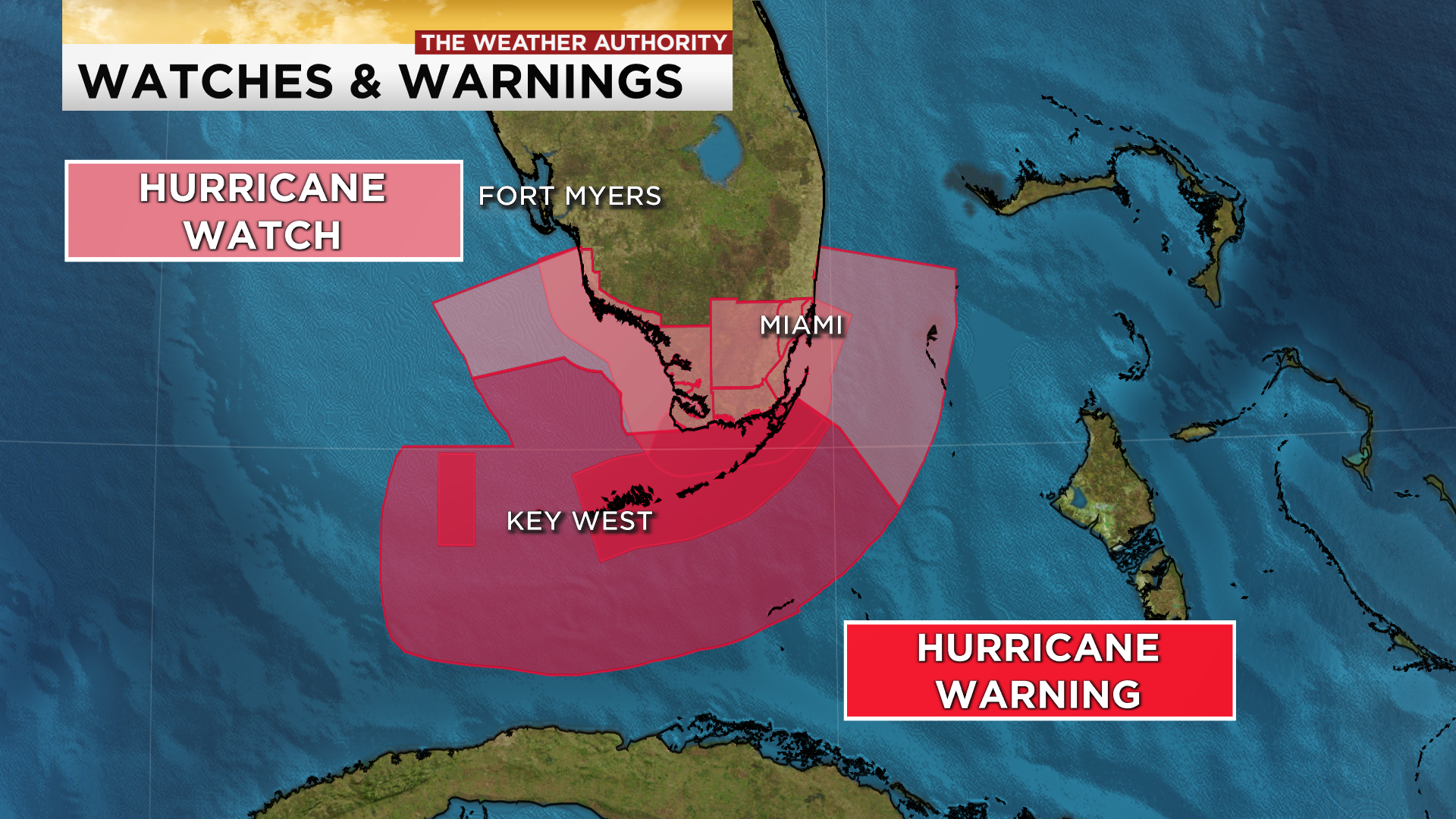 A Hurricane Warning is in effect for the Florida Keys from Ocean Reef to the Dry Tortugas, including Florida Bay.

A Hurricane Watch is in effect for the Florida coast from Golden Beach to Bonita Beach. 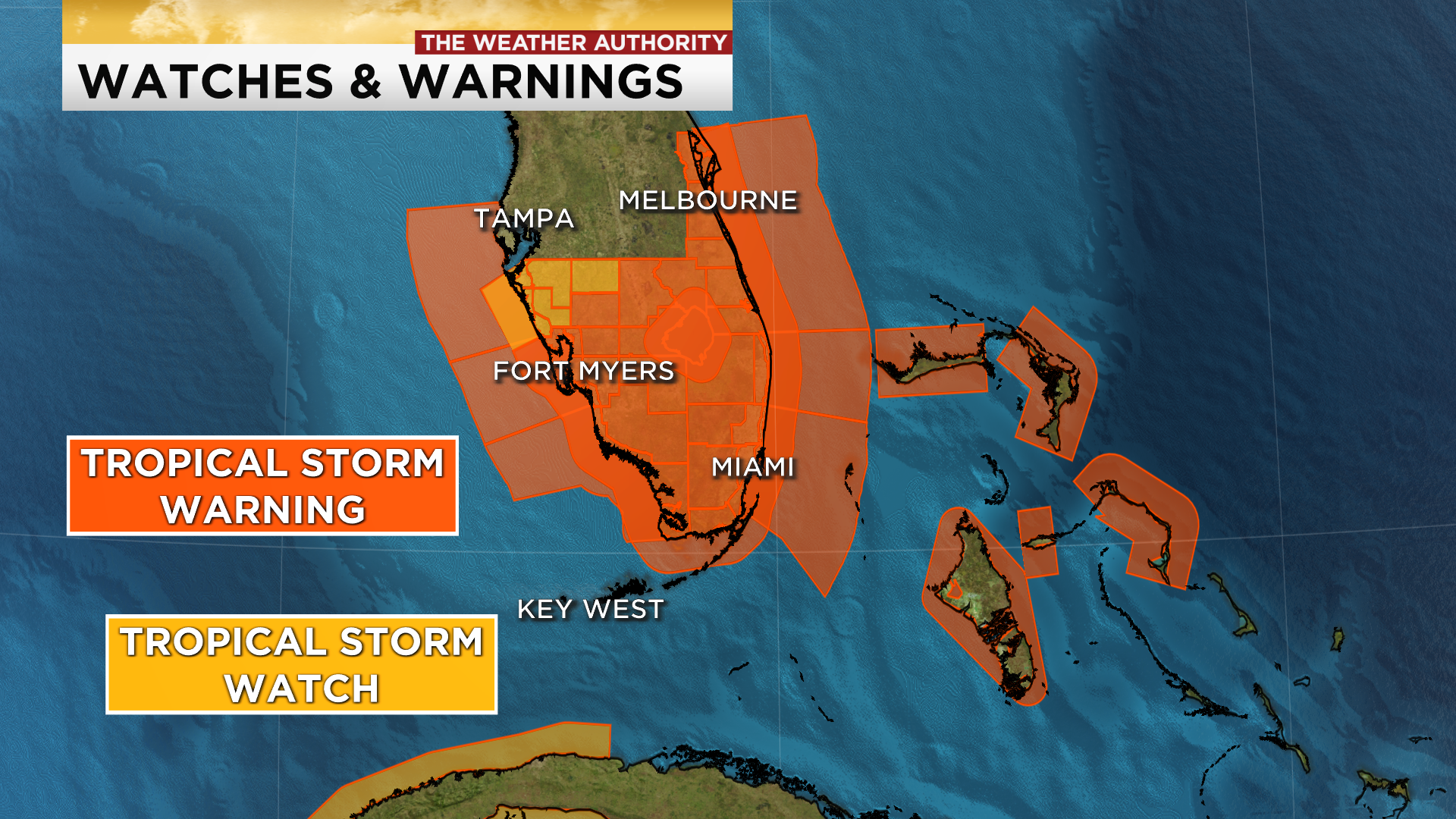 A Tropical Storm Warning is in effect for the Northwestern Bahamas, including the Abacos, Andros Island, Berry Islands, Bimini, Eleuthera, Grand Bahama Island, and New Providence, the Florida coast from Brevard/Volusia County line to Englewood, and Lake Okeechobee.

A Tropical Storm Watch is in effect for the Cuban provinces of La Habana, Artemisa, Mayabeque, Pinar del Rio, and the Isle of Youth, the Florida coast from north of Englewood to Anna Maria Island.