As of 11 pm Monday evening, Zeta is just a couple hours away from landfall on the Yucatan Peninsula. The hurricane has maintained 80 mph maximum sustained winds and is moving to the northwest at 13 mph. 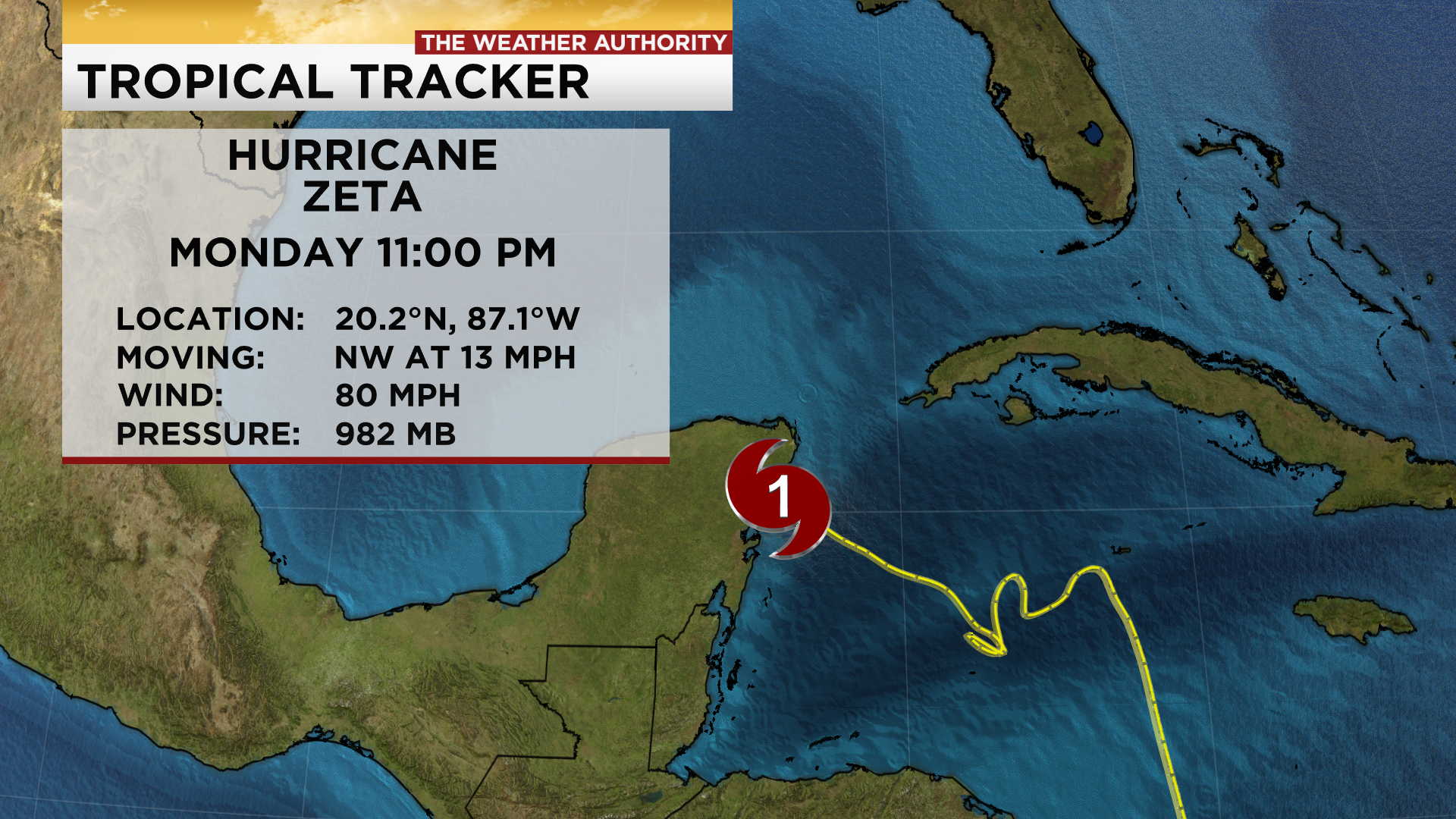 Hurricane conditions and life-threatening storm surge are anticipated across portions of the Yucatan Peninsula into tonight and tomorrow morning.

A dangerous storm surge will raise water levels by as much as 1-3 feet above normal tide levels along the immediate coast in the Hurricane Warning area. Rainfall totals of 4 to 8 inches (isolated higher) are possible through Tuesday across the Yucatan Peninsula of Mexico, the Cayman Islands, and central to western Cuba. 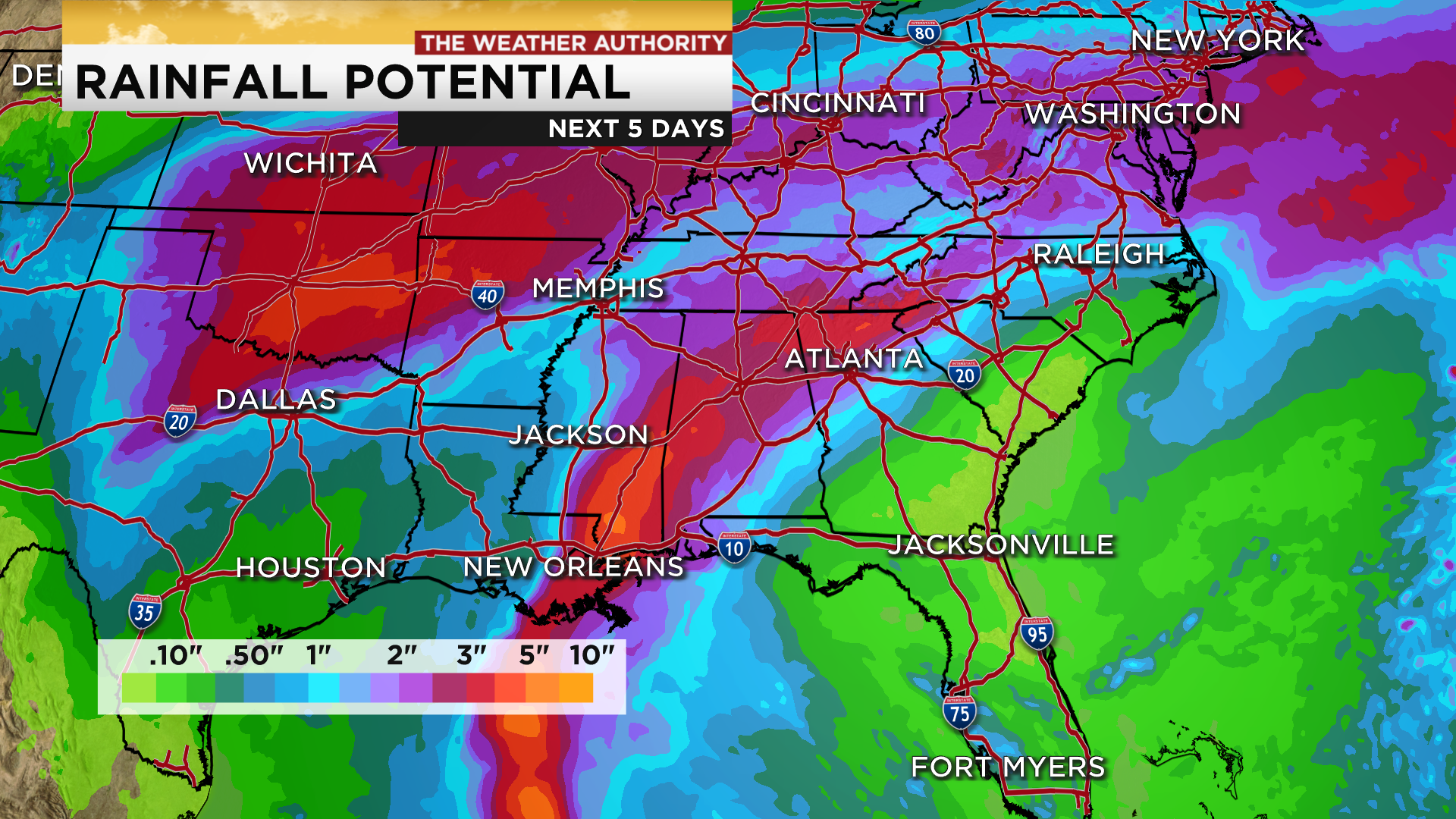 A Hurricane Warning is in effect for Tulum to Dzilam Mexico to Cozumel.

A Hurricane Warning means that hurricane conditions are expected somewhere within the warning area, in this case within the next 12 hours.

A Tropical Storm Warning is in effect for South of Tulum to Punta Allen Mexico to West of Dzilam to Progreso Mexico.

A Tropical Storm Warning means that tropical storm conditions are expected somewhere within the warning area within 12 to 24 hours. 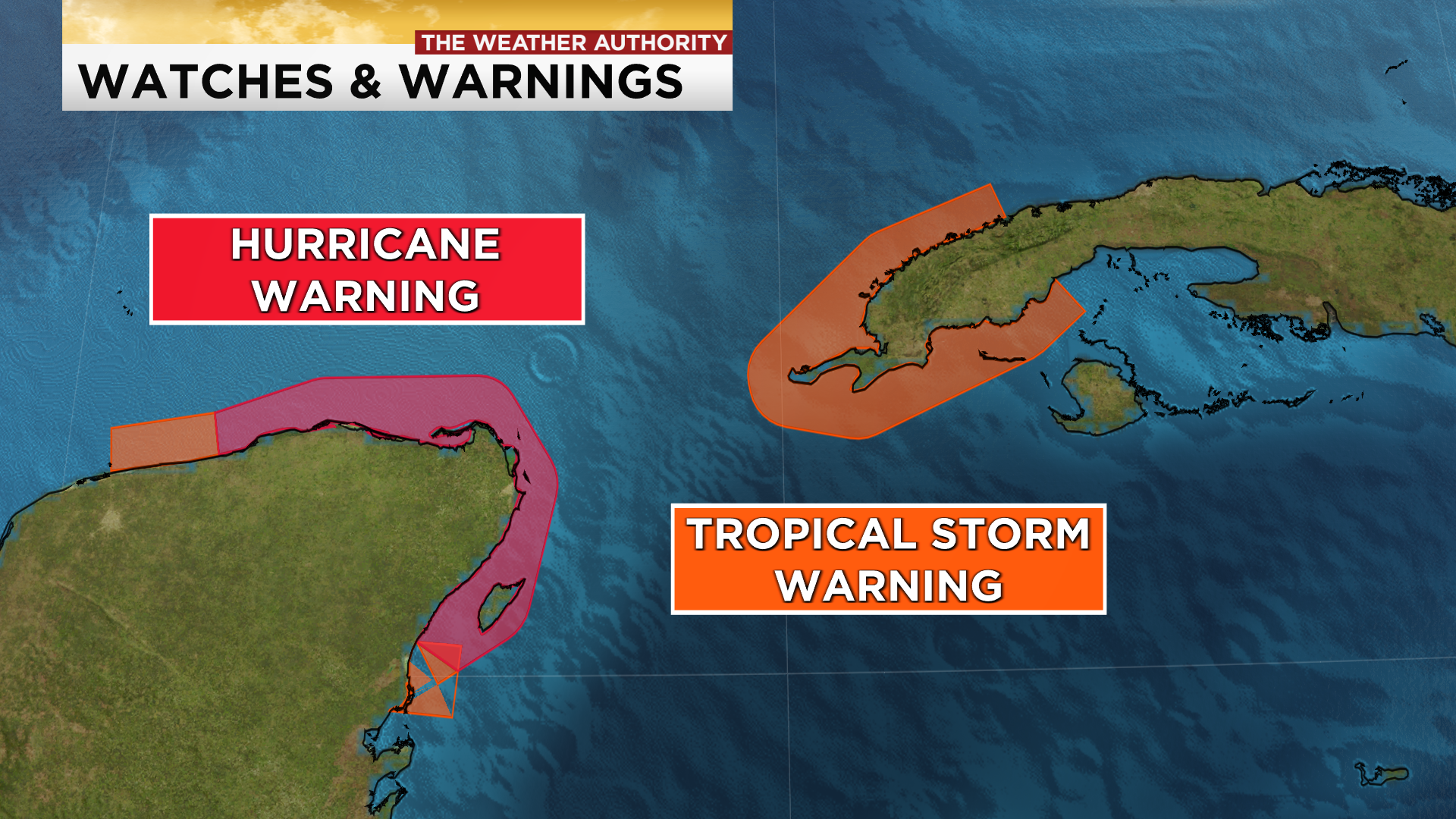 A Hurricane Watch is in effect for Morgan City Louisiana to the Mississippi/Alabama border, including Lake Pontchartrain, Lake Maurepas, and Metropolitan New Orleans.

A Hurricane Watch means that hurricane conditions are possible within the watch area.  A watch is typically issued 48 hours before the anticipated first occurrence of tropical-storm-force winds, conditions that make outside preparations difficult or dangerous.

A Tropical Storm Watch is in effect for Mississippi/Alabama border to Okaloosa/Walton County Line Florida to West of Morgan City to Intracoastal City Louisiana. 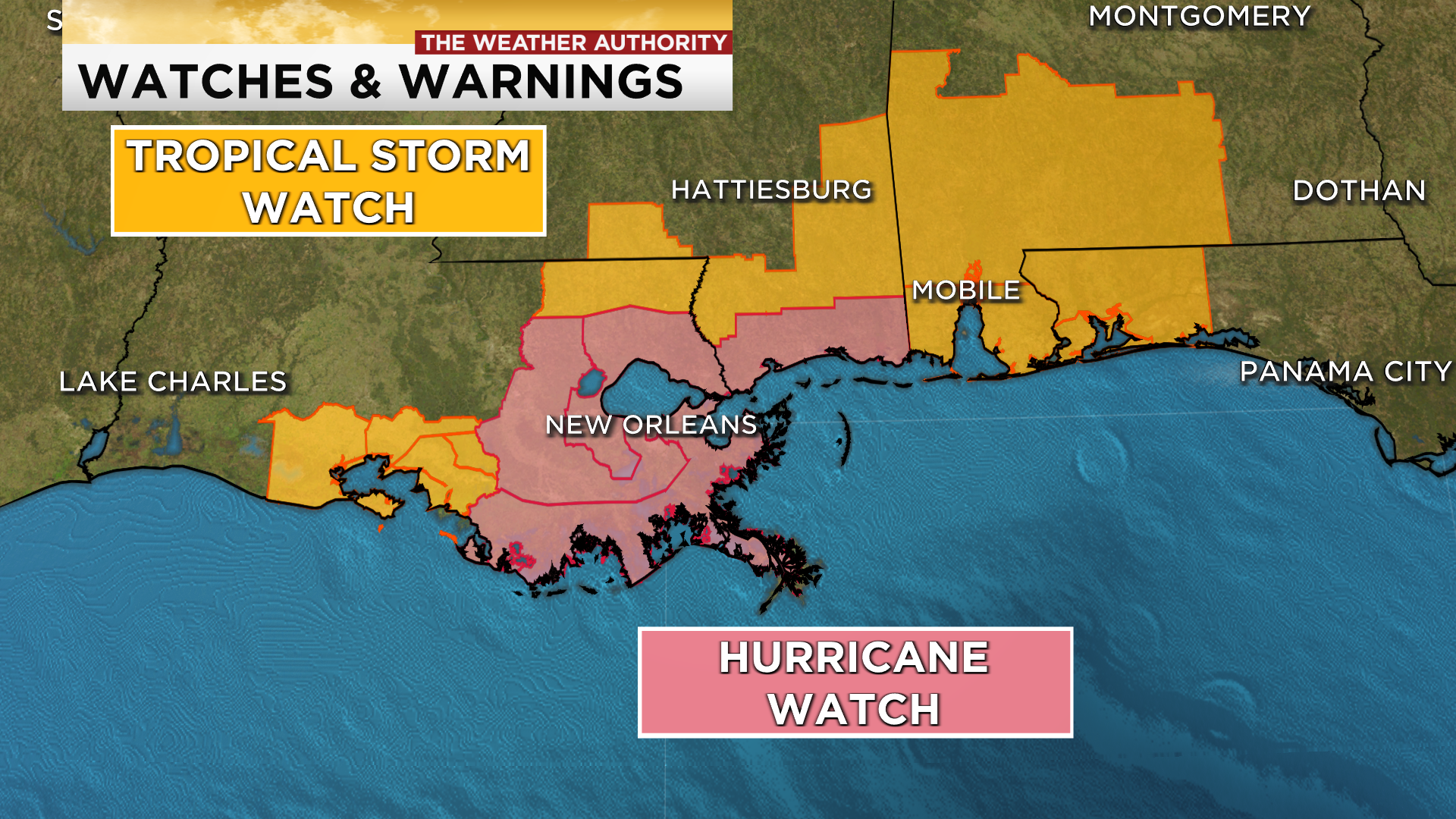 A Storm Surge Watch means there is a possibility of life- threatening inundation, from rising water moving inland from the coastline, in the indicated locations during the next 48 hours. 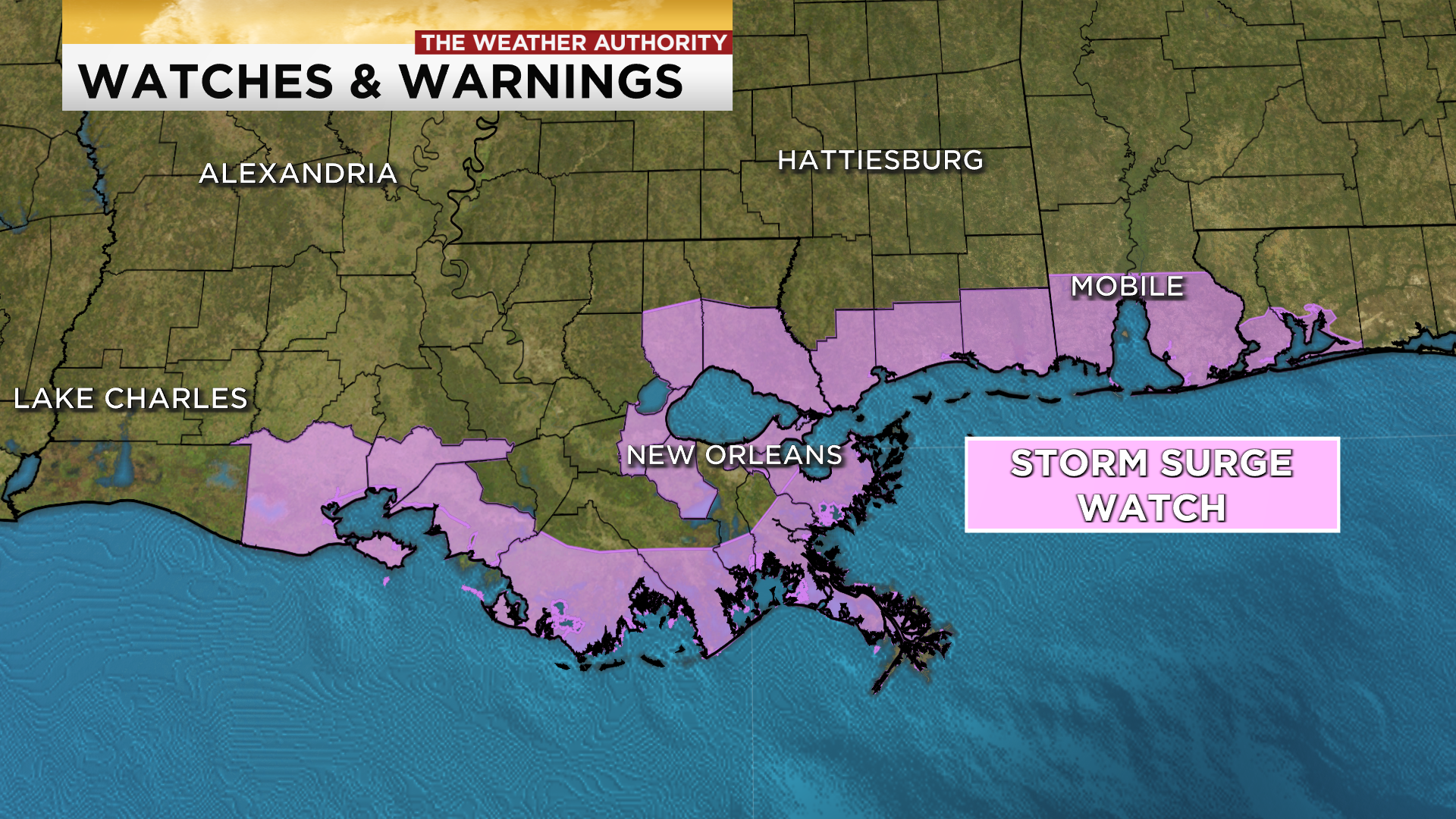 Otherwise, high temperatures will top in the lower 90s, with a southeasterly breeze. 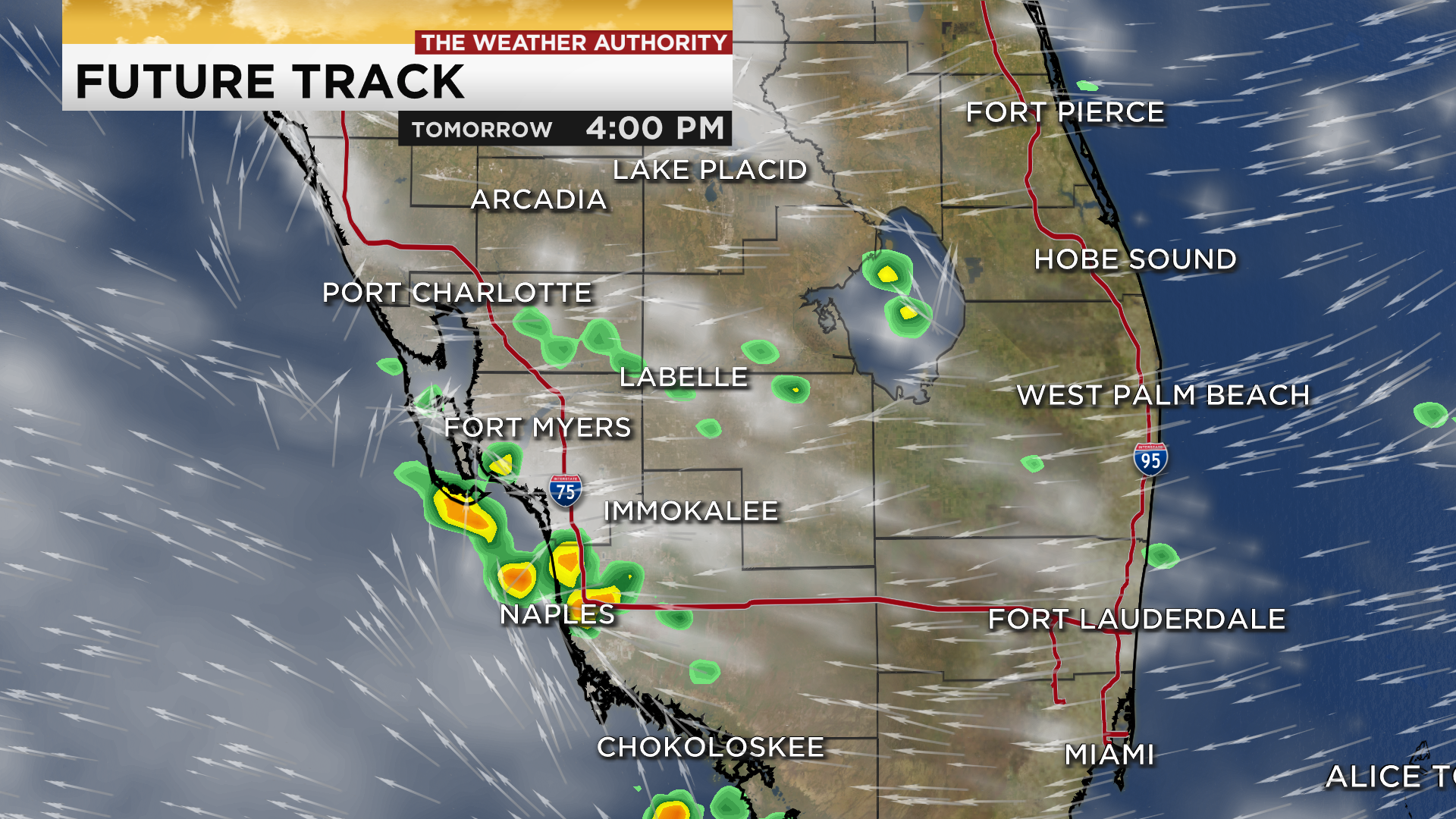