In the middle of a pandemic, when health care is more important than ever, Americans and their employers will likely pay more for insurance coverage.

Premiums for employer-sponsored health coverage rose by about four percent in 2020, according to a survey by Kaiser Family Foundation. For 2021, Southwest Florida insurance agents said businesses can expect a similar trend.

“Every year we have the question where is the breaking point where businesses can’t continue this cycle anymore what’s the number that they can’t pay half of the premium for the employees,” said Curtis Colbert, the owner of Simplified Insurance Solutions.

Tempco, a pest control company based in Fort Myers, said their agent showed them rates that would have increased employee premiums by as much as 150%.

“Many of our employees have new homes, they have families, they have kids. They need to budget their money. To have the healthcare to go up 150% would cause many of them not to take the insurance,” said Mike Ryan, the owner of Tempco.

Tempco turned to a self-insured indemnity plan in order to be able to continue to provide their staff with benefits without a huge increase in premiums. But that plan has it’s downsides, according to Ryan. For example, the company has to take on more risk and if there are too many claims filed the policy can be canceled. 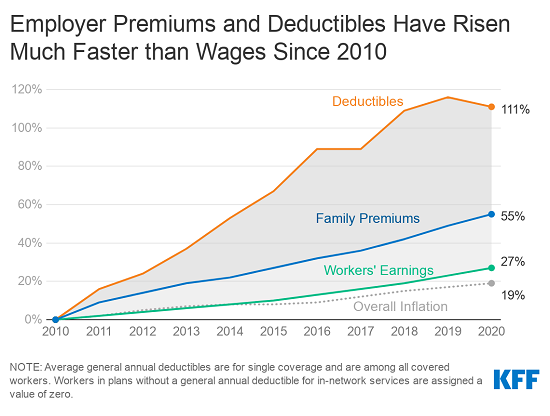 According to America’s Health Insurance Plans, AHIP, the majority of people covered through their employer are actually in a self-funded plan.

Family premiums on all employer-sponsored plans rose to an average of $21,342 this year, according to the 2020 benchmark KFF Employer Health Benefits Survey. On average, workers this year are contributing $5,588 toward the cost of family coverage, with employers paying the rest.

The survey was conducted from January to July as the COVID-19 pandemic and economic crisis unfolded and may not capture its full impact on costs and coverage. The annual change in premiums is similar to the year-to-year rise in workers’ earnings (3.4%) and inflation (2.1%), though over time what employers and workers pay toward premiums continues to rise more quickly than wages and inflation. Since 2010, average family premiums have increased 55%, at least twice as fast as wages (27%) and inflation (19%).

LINK: Full report from the study

“It’s a key reason that we need to tackle the out-of-control healthcare spending whether you look at prescription drugs, specialty prescription drugs in particular, or hospital stays. There’s just an enormous amount of escalating costs year after year,” said Beck.

Even with rising costs, he said that employer-sponsored coverage actually offers consumers the best opportunity to negotiate the best prices for medical care.

But Colbert said the rising cost of insurance has had a devastating impact middle-class families and feels it’s led to wage stagnation over the past 20 years. His business now focuses on free-market solutions to providing health coverage for businesses and individuals.

“When you look at a family of four and how much money they spend. If they invested in a 401k versus these increasing premiums, deductibles, co-pays, and coinsurance a family of four over the last 20 years might have half a million or more in a retirement account. (Instead) that all went to healthcare,” said Colbert.

Other survey findings include: