Donalds willing to work with Biden administration, but dismayed by executive actions

On the morning of primary elections, many voters are claiming to have received messages via text and on Facebook Messenger that GOP candidate Byron Donalds has dropped out of the race for the U.S. House Florida District 19 seat.

Donalds responded via a Facebook Live video after learning of the messages, saying that it is not true. He claims the attack is coming from the Casey Askar campaign. But the Askar campaign says it’s not responsible for the texts voters received.

“You, the voters, have a choice to make” Donalds said. “Do not follow the lies from this despicable text.”

The YouTube video linked within the message of Donalds dropping out of the campaign is from a previous campaign.

“That’s video from 2014 when I declined to run for Congress in a special election,” Donalds said. 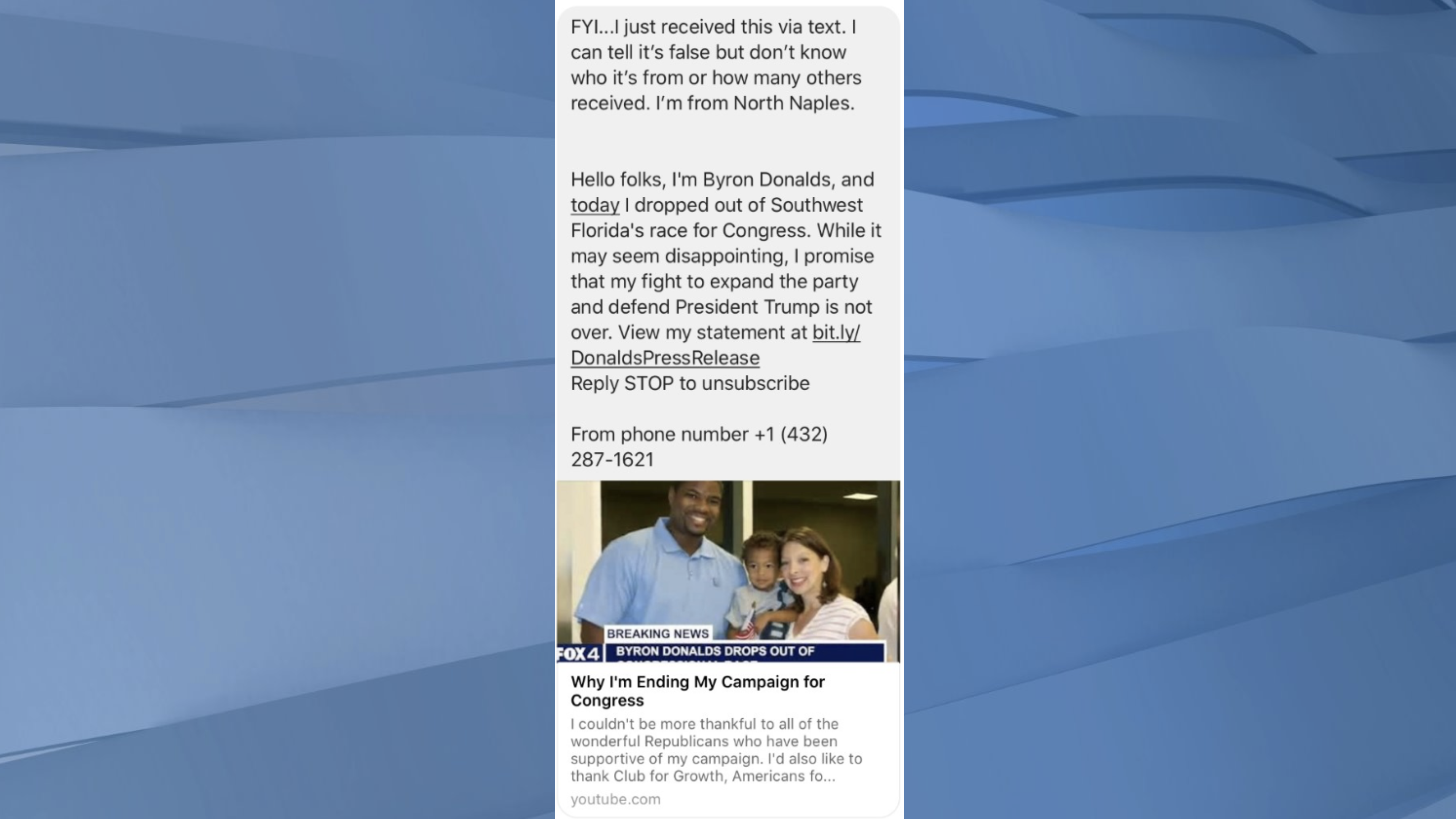 We did a reverse phone number search that came back with zero results. Then, we called the number ourselves. We received an automated reply from Verizon Wireless that said a call could not be completed.

Some even questioned if Donalds himself or someone close to his campaign sent the text, setting up the candidate as a victim.

We searched federal election commission records to see if any of the text recipients we know of previously contributed to Donalds’ campaign, but we didn’t find anything there.

So we asked Donalds if he is responsible.

“Utterly ridiculous, stupid; that is a dumb accusation,” Donalds responded. “We would never send out something like that to try and drum up publicity.”

Hours before the polls closed, Donalds’ team is working to make sure any damage can be reversed.

The director of the Republican Party of Florida called the fake text message unethical, immoral and illegal. And she’s right. It’s a third-degree felony in Florida to use fake information to keep someone from voting or interfere with their voting for the candidate of their choice.

In response to Donalds’ claim against Casey Askar, the Askar campaign responded with the following:

“The Casey Askar for Congress campaign responded to Byron Donalds’ desperate attempt at a last minute political smear. Donalds took to Facebook this morning to accuse Casey Askar and his campaign team of sending out a text message claiming he dropped out of the race. It is 100% false – the Askar Campaign has not sent one text message today.”

The campaign had this to say, “This is 100% wrong. The Askar campaign has sent 0 text messages today. We have not even seen and therefore cannot confirm that this alleged text even exists. It very well could be a fabricated claim. We have one text message scheduled for this afternoon at 2:30 PM that will encourage our voters to get out and vote before polls close. It is sad that the media is covering an unsubstantiated claim in the final hours of the campaign.“

Donalds willing to work with Biden administration, but dismayed by executive actions