Atmospheric and oceanic conditions are primed to fuel storm development in the Atlantic, leading to what could be an “extremely active” season, according to forecasters with NOAA’s Climate Prediction Center, a division of the National Weather Service. Today, the agency released its annual August update to the Atlantic Hurricane Season Outlook, initially issued in May.

The 2020 Atlantic hurricane season has been off to a rapid pace with a record-setting nine named storms so far and has the potential to be one of the busiest on record. Historically, only two named storms form on average by early August, and the ninth named storm typically does not form until October 4. An average season produces 12 named storms, including six hurricanes of which three become major hurricanes (Category 3, 4, or 5).

“This is one of the most active seasonal forecasts that NOAA has produced in its 22-year history of hurricane outlooks. NOAA will continue to provide the best possible science and service to communities across the Nation for the remainder of hurricane season to ensure public readiness and safety,” said U.S. Secretary of Commerce Wilbur Ross. “We encourage all Americans to do their part by getting prepared, remaining vigilant, and being ready to take action when necessary.” 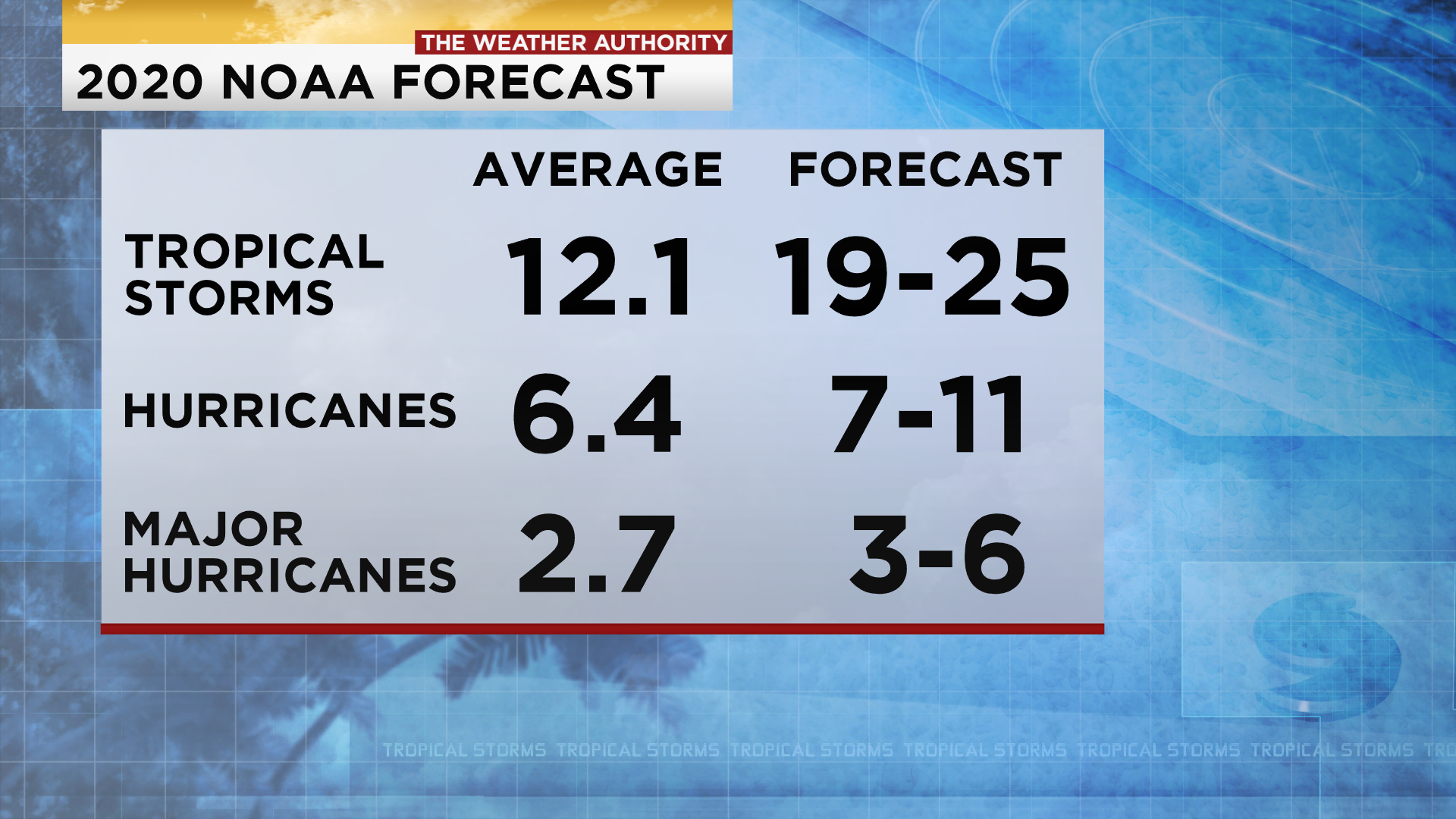 A comprehensive measure of the overall hurricane season activity is the Accumulated Cyclone Energy (ACE) index, which measures the combined intensity and duration of all named storms during the season. Based on the ACE projection, combined with the above-average numbers of named storms and hurricanes, the likelihood of an above-normal Atlantic hurricane season has increased to 85%, with only a 10% chance of a near-normal season and a 5% chance of a below-normal season.

Current oceanic and atmospheric conditions that make an “extremely active” hurricane season possible are warmer-than-average sea surface temperatures in the tropical Atlantic Ocean and Caribbean Sea, reduced vertical wind shear, weaker tropical Atlantic trade winds and an enhanced west African monsoon. These conditions are expected to continue for the next several months. A main climate factor behind these conditions is the ongoing warm phase of the Atlantic Multi-Decadal Oscillation, which reappeared in 1995 and has been favoring more active hurricane seasons since that time.

Another contributing climate factor this year is the possibility of La Nina developing in the months ahead. Indicative of cooler-than-average sea surface temperatures in the equatorial regions of the eastern Pacific Ocean, La Nina can further weaken the wind shear over the Atlantic Basin, allowing storms to develop and intensify.

NOAA’s hurricane season outlook is for overall seasonal activity and is not a landfall forecast. Landfalls are largely determined by short-term weather patterns, which are only predictable within about a week of a storm potentially reaching a coastline. NOAA’s National Hurricane Center provides tropical weather outlooks out to five days in advance, provides track and intensity forecasts for individual storms, and issues watches and warnings for specific tropical storms, hurricanes and the associated storm surge.

“NOAA has the most highly trained and dedicated forecasters that serve to protect American lives and property. With improved forecast skill, new storm surge products, and new observations, such as GPS Radio Occultation, we are better positioned than ever before to keep Americans out of harm’s way,” said Neil Jacobs, Ph.D., acting NOAA administrator. “It is now more important than ever to stay informed with our forecasts, have a preparedness plan, and heed guidance from local emergency management officials.”