With the 11 p.m. update, NHC expects that Isaias will be at or near hurricane strengthen when it reaches the Carolinas on Monday.

The storm is now 50 miles from Cape Canaveral, Florida, and 365 miles from Myrtle Beach, South Carolina. 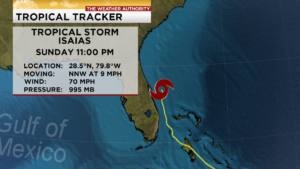 At 8 p.m. NHC expects the path of Tropical Storm Isaias to continue moving north-northwest off the coast of east-central Florida.  Maximum sustained winds stayed up around 70 mph.

The storm is now 55 miles from Cape Canaveral, Florida.

At 5 p.m. the NHC says that Isaias has strengthened slightly while being just of the East-central coast of Florida. Maximum sustained winds increase to 70 mph. The storm is now 65 miles from Cape Canaveral, Florida.

4:30 PM RADAR UPDATE: Tropical Storm Isaias continues to swirl just offshore of the Space Coast. Locally in SWFL, a few isolated showers are moving through the area from the north to south. Expect these kind of showers to continue through the evening hours across SWFL… #flwx pic.twitter.com/GBVN6KhQWB

As of 2 p.m., Tropical Storm Isaias remains poorly organized, with most of its thunderstorm activity displaced east of the center. However, Isaias is not done. Satellite imagery indicating the storm is trying to strengthen, as we have had a few bursts of convection on the northeast quadrant over the past hour. Hurricane Hunters continue to investigate the storm and finding wind still sustained at 65 mph.

Isaias is forecast to push northward over the next day or so, along Florida’s Treasure and Space coasts. After Monday, Isaias will accelerate northward, bringing rain and wind to much of the eastern U.S. through midweek.

As far as intensity is concerned, despite being over the very warm waters of the Gulf Stream off Florida’s east coast, Isaias is no longer expected to restrengthen to a hurricane, thanks to a combination of wind shear and dry air.

Here in Southwest Florida, our local impacts from Isaias will be relatively minimal. You can expect scattered showers and storms, more clouds for some (especially inland), and breezy conditions. Rainfall totals will range from 0.25″ – 0.75″ for most through Monday night. Sustained wind will range from 10 – 20 mph with gusts 20 – 30 mph, with the highest wind gusts near Lake Okeechobee. 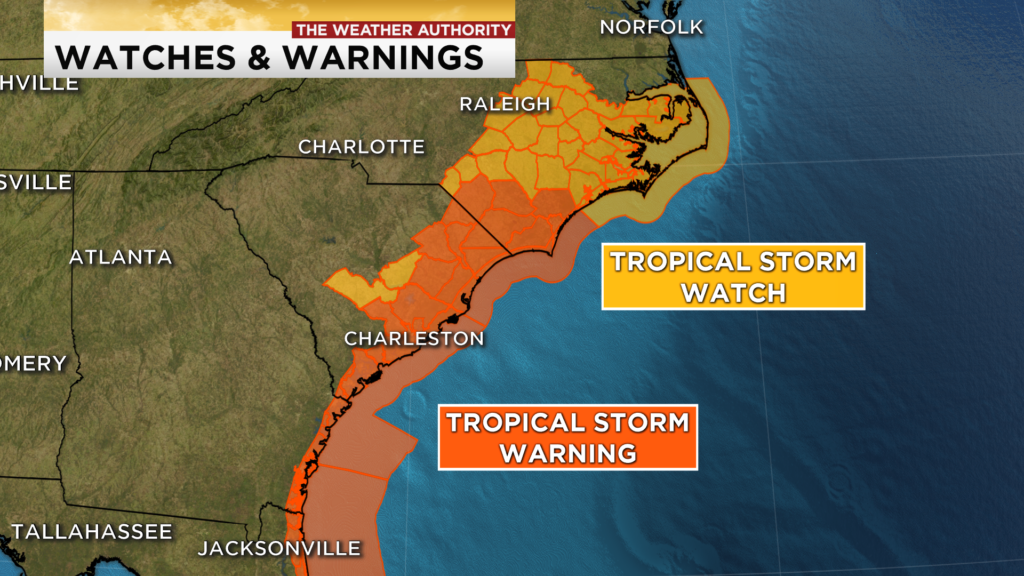 Watches and warnings as of 2 p.m.:

A Tropical Storm Watch has been issued for the North Carolina coast from north of Surf City to Duck, including Pamlico and Albemarle Sounds.

SUMMARY OF WATCHES AND WARNINGS:

A Tropical Storm Warning is in effect for Jupiter Inlet, Florida to Surf City, North Carolina.

The Tropical Storm Warning has been extended northward to Ocracoke Inlet North Carolina.

A Tropical Storm Warning means that tropical storm conditions are expected somewhere within the warning area, generally within 36 hours.

A Tropical Storm Watch is in effect for North of Surf City to Duck, North Carolina, Pamlico and Albemarle Sounds. 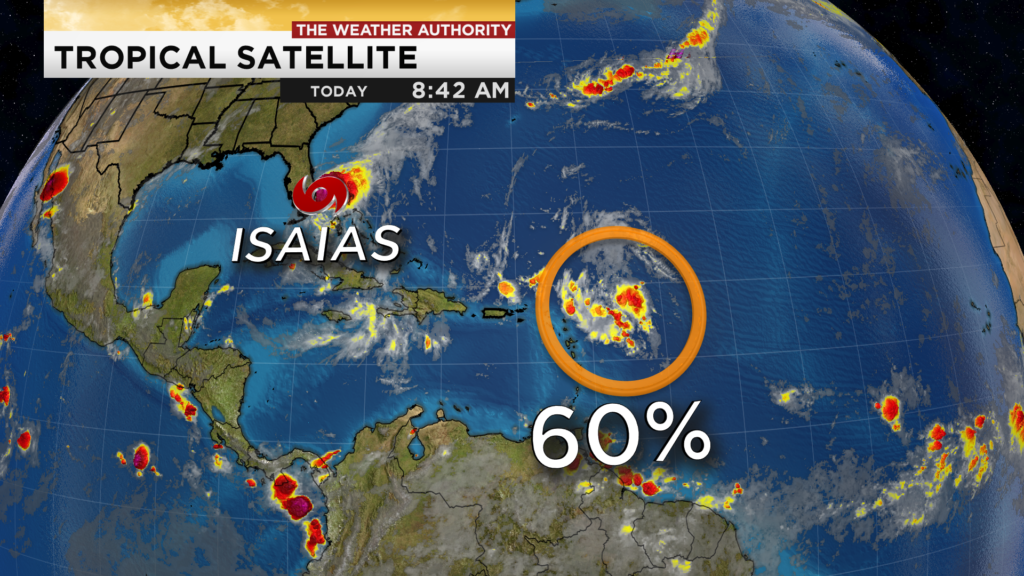 ELSEWHERE IN THE TROPICS

A tropical wave located several hundred miles east of Puerto Rico has gotten better organized overnight. Satellite imagery shows an increase in thunderstorm activity, and a tropical depression or storm could form over the next several days as it pushes northward into the open Atlantic. NHC currently gives this feature a 60% chance of development, and if it were to receive a name, the next name is Josephine.

Tropical Depression 10, which formed off the west coast of Africa on Friday, has dissipated.