Hurricane Isaias continued to impact the Central Bahamas overnight moving NW at 15 mph with 80 mph sustained winds, and its expected to affect the southeast coast of Florida on Saturday.

The Hurricane Watch is changed to a Hurricane Warning from the Volusia/Brevard County line to the Flagler/Volusia County Line.

11pm Friday: A small part of SWFL is in the cone at this time, but if the track doesn’t change SWFL should NOT be in the cone tomorrow and Sunday. This is because the margin of error cone will be more narrow tomorrow. Get ready for a windy weekend. pic.twitter.com/14HuH6uK5P

Hurricane Isaias (pronunciation: ees-ah-EE-ahs) formed Thursday night, and our team is monitoring it about 195 miles southeast of Nassau, Bahamas.

Parts of eastern Southwest Florida are back in the forecast cone for Isaias with the cone shifting slightly west on Friday. Those portions include far northeast Hendry County, east Glades County and east Highlands County. Tropical Storm conditions and heavy rains continue to spread across the Central Bahamas. 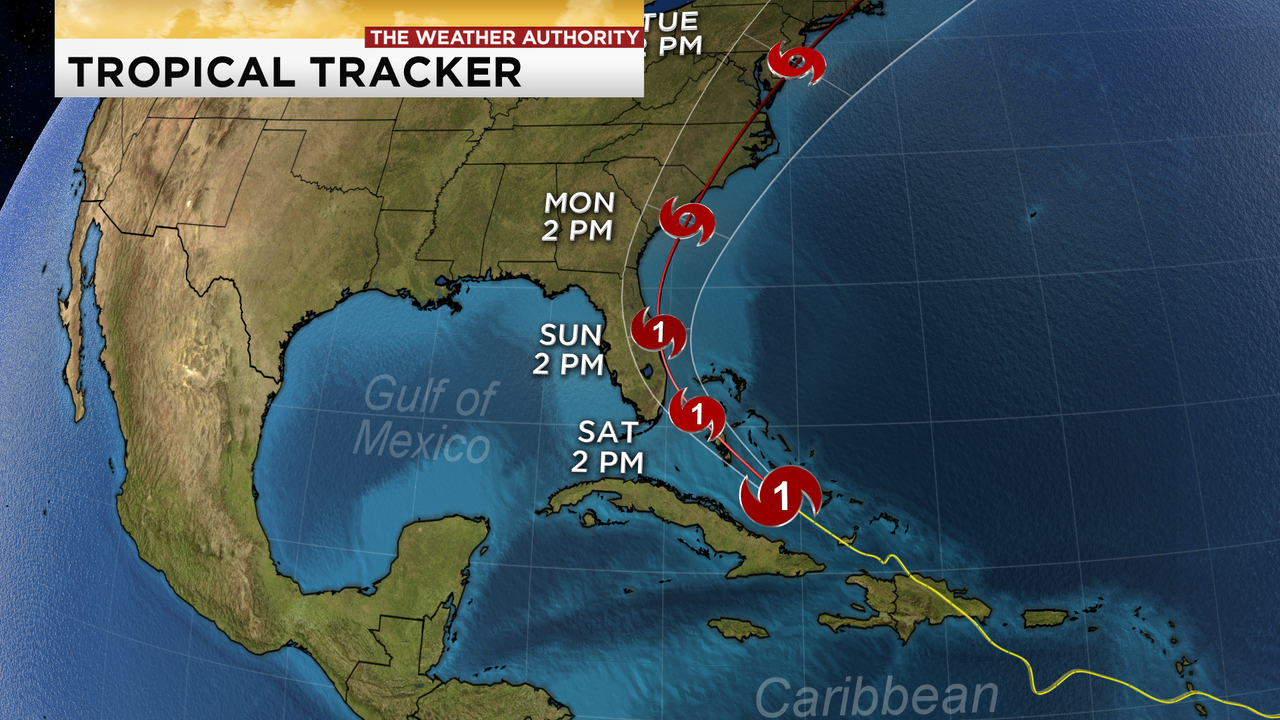 Hurricane hunters found that the storm was getting better organized.

The National Hurricane Center forecast cone has Isaias off the Florida east coast by this weekend. Isaias has maintained its strength with maximum winds of 80 mph and is moving to the northwest at 15 mph. There was no significant change in the forecast cone with this update.

A general northwestward motion with some decrease in forward speed is expected for the next day or so, followed by a turn to the north-northwest by late Sunday.

The storm is expected to strengthen later tonight and early Saturday and Isaias is forecast to remain a hurricane for the next couple of days.

Here in Southwest Florida, our local impacts from Isaias will be relatively minimal. You can expect scattered showers and storms, more clouds for some (especially inland), and breezy conditions. Rainfall totals will range from 0.25″ – 0.75″ for most through Monday night, with isolated amounts over an inch. Sustained wind will range from 15 – 25 mph with gusts 25 – 35 mph, with the highest wind gusts near Lake Okeechobee. 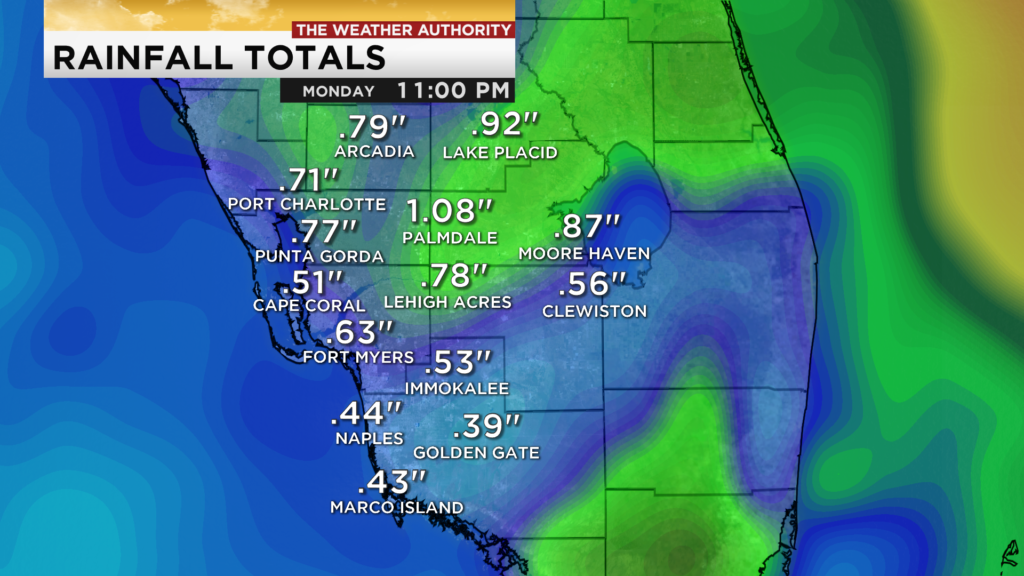 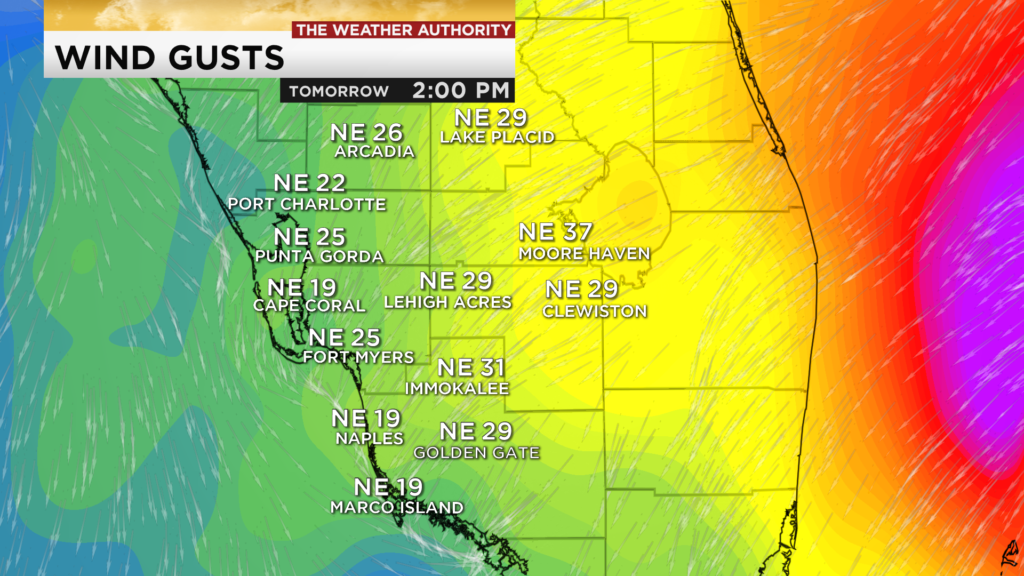 A Hurricane Warning is in effect for the east coast of Florida from Boca Raton to the Volusia/Brevard County Line and from the Volusia/Brevard County Line to the Flagler/Volusia County Line, the Northwestern Bahamas including Andros Island, New Providence, Eleuthera, Abacos Islands, Berry Islands, Grand Bahamas Island, and Bimini, the Southeastern Bahamas including the Acklins, Crooked Island, Long Cay, the Inaguas, Mayaguana, and the Ragged Islands, the Central Bahamas, including Cat Island, the Exumas, Long Island, Rum Cay, and San Salvador.

A Hurricane Warning means that hurricane conditions are expected somewhere within the warning area, typically 36 hours before the anticipated first occurrence of tropical-storm-force wind. In these areas, preparations to protect life and property should be rushed to completion.

A Hurricane Watch is in effect for Hallendale Beach to south of Boca Raton, Florida and Volusia/Brevard County line to the Flagler/Volusia County line.

A Hurricane Watch means that hurricane conditions are possible within the watch area.  A watch is typically issued 48 hours before the anticipated first occurrence of tropical-storm-force winds, because conditions that make outside preparations difficult or dangerous.

A Tropical Storm Warning is in effect for the Turks and Caicos Islands, North of Ocean Reef northward to Sebastian Inlet, and Lake Okeechobee.

A Tropical Storm Watch is in effect for Flagler/Volusia County Line to Ponte Vedra Beach Florida.

A Storm Surge Watch is in effect for Jupiter Inlet to Ponte Verde Beach, Florida. 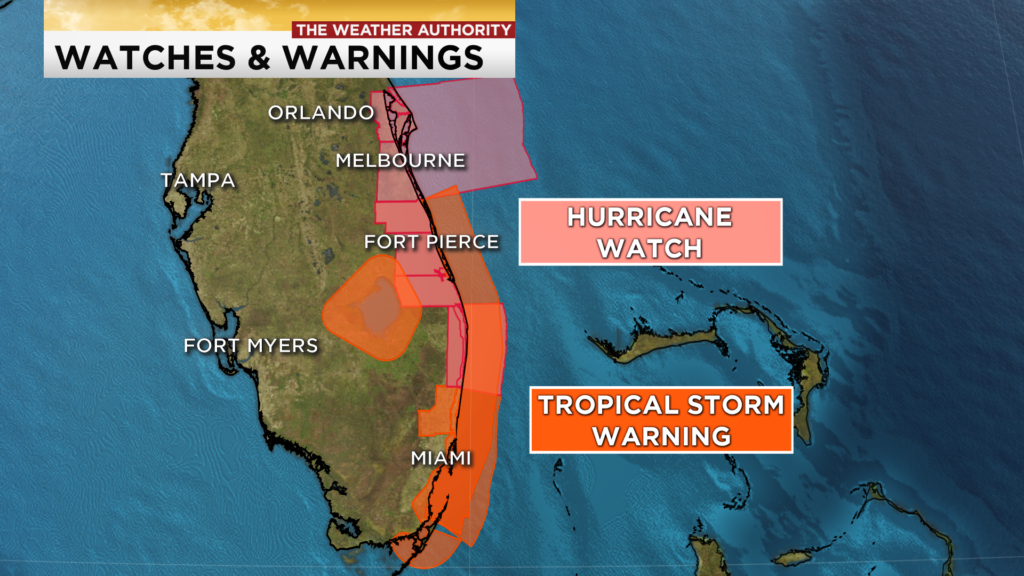 Elsewhere in the tropics, we are monitoring two tropical waves off the African coast. Right now, the NHC gives both a 20% chance of development over the next five days. Long-range models don’t look very impressive right now, but these are areas we definitely need to watch. 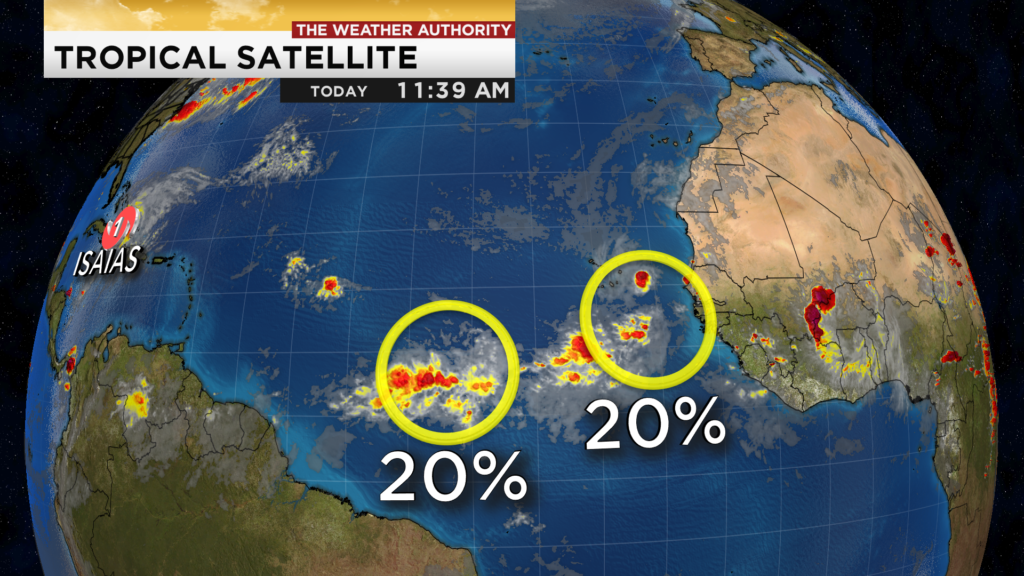 Trust our Weather Authority team to bring you the latest all season long!