The official LCSO Facebook page is accused of replying to a Facebook commenter with an eggplant emoji, which is often used as the meaning for male genitalia or an ethnic slur.

The sheriff’s office posted a video about a new initiative. In the comments of the post, a user commented, “Best sheriff in a very long time,” referring to Sheriff Carmine Marceno.

That prompted a response to the comment by the official LCSO Facebook page, tagging Canington and saying, “Amanda Regnier Canington You’re a [eggplant emoji]”. 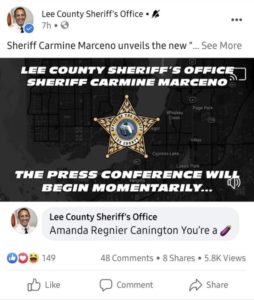 “The taxpayers, I’m sure, don’t appreciate it,” said Melina Brady, who grew up in Lee County.

Brady saw the post and knew what the eggplant meant in this context, a lewd reference to a male’s body part.

“With all the things coming to light about the way women have been treated the past couple years, and especially on top of that is not professional is not okay, would he have said that to a guy?” Brady said.

In an interview with The News-Press, Marceno said his office does not have a firm social media policy.

“I found that to be a little troubling,” Seay said. “There needs to be some kind of control as to what is and is not on your official page.”

The next problem is what the LCSO account represents. The sheriff’s office is a taxpayer-funded law enforcement agency, so is its Facebook page.

WINK News reached out to the Lee County Sheriff’s Office for comment. LCSO responded and said, if the sheriff’s office has done something wrong, it will take responsibility for it. We have not received further comment at this time.