Study says just over half of parents want kids in classroom, but SWFL parents say not over safety

Parents search for Cape Coral nurses who saved their daughter

Study says just over half of parents want kids in classroom, but SWFL parents say not over safety

Parents search for Cape Coral nurses who saved their daughter

When Oona Hanson and her husband started running out of ideas on how to keep their two children focused — and entertained — during the pandemic-induced shutdown, they remembered one of their longtime jokes.

“For 10 years we’ve joked that our kids need a common sense camp,” Hanson told CNN. “When they weren’t able to do things that seemed like just practical life skills they should have picked up already, we’d kind of say, ‘Oh, common sense camp!’ It was just a joke.”

But after the coronavirus pandemic forced sleepaway camps to cancel and parks to remain closed, the Hansons decided to turn a “total bummer summer” into an opportunity to make the Common Sense Camp a reality.

Based in Los Angeles, the former high school English teacher and now parent coach created an eight-week curriculum for her son and daughter that teaches them skills that are usually common sense. 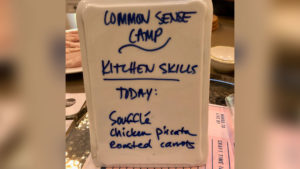 “We’re laying the tracks down in front of a moving train. We realized there were all these things we would just do ourselves because it seemed more advanced or we just wanted it done and it’s been nice to slow down and teach our kids all these new skills,” Hanson said.

“You can just see the looks on their faces, there’s so much pride in learning something new. At school, of course they learn math and how to read or write papers, but to be able to do things, make things, fix things captures a whole different type of learning that gives them the confidence to go out in the world and be independent.”

In Common Sense Camp, Hanson’s kids learn lots of practical skills like reading a map, using a banking app to budget, or how to administer CPR and first aid. The camp also teaches interpersonal skills, like how to be a good friend and community member, as well as fight for social justice.

The family uses the book “How to Be a Person: 65 Hugely Useful, Super Important Skills to Learn Before You’ve Grown Up” by Catherine Newman to find ideas on common sense skills to include in each week’s lessons.

During the first week of camp, which coincided with Juneteenth, the theme was “Anti-Racism.” Using a list of resources for White families, the Hansons shared lessons with their children on issues like microaggressions, events from Black history, and ways to become better allies and activists. Each member of the family got an opportunity to introduce a social justice action plan of their own.

Last week’s theme was “Kitchen Confidence,” in which the kids learned fundamental skills like reading a recipe and how to use different types of knives. By the end of the week, the two were able to cook dinner for four without any help from their parents. 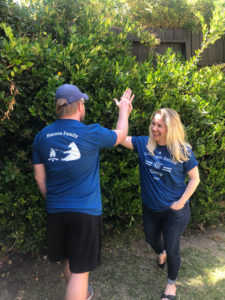 “The best part of Common Sense Camp so far has been making fresh pasta from scratch because it was so fun,” said 12-year-old Harris Hanson.

Harris, who hadn’t cooked a single thing before the camp and didn’t even know where the grater was until a week ago, can now make even more difficult dishes, like a souffle.

Next week’s theme will be “DIY.” The Hansons will teach their children hands-on skills, like using common tools, changing a light bulb, and making home repairs. For the final project, the two can choose from hanging a frame on the wall, assembling a piece of furniture or painting a wall.

The rest of the weekly themes include laundry and cleaning, safety and emergency preparedness, personal finance, navigating the city, and social skills.

Harris’ older sister, 17-year-old Gwendolyn Hanson, said that despite initial hesitations, she feels grateful for the camp which has made her “so much more prepared for going off to college in a year.”

“While some of the lessons weren’t super fun, they realized how important and beneficial is it to have these skills their whole life. This has given them so much self-esteem and confidence in themselves and their ability to tackle these challenges and mastering all these new skills,” Hanson said

“It’s also important to remember that since we aren’t essential workers, which is an incredible privilege for us, this has also given us a really amazing opportunity to have some quality bonding time as a family.”

Many families are now asking the Hansons to make their camp public. For now, they’re putting together materials to support other parents who want to do something similar for their children.