Abused dog continues to fight for her life in ICU

Abused dog continues to fight for her life in ICU

NOAA’s Office of Law Enforcement needs your help and they are offering a reward of up to $20,000 for information that leads to a civil penalty or criminal conviction of the person(s) responsible for the recent deaths of two dolphins in Florida.

DISCLAIMER: GRAPHIC CONTENT – The photo below may be disturbing to some.

A dolphin was found dead off Naples late last week by Florida Fish and Wildlife Conservation Commission biologists. The animal was fatally wounded by what appeared to be a bullet and/or sharp object.

Within the same week, another dolphin was recovered by the Emerald Coast Wildlife Refuge with a bullet in its left side along Pensacola Beach.

Back in May 2019, a dolphin, also with a fatal puncture wound to its head, was found dead off Captiva Island. That investigation is ongoing and also offers a reward for information.

NOAA says all three incidents are likely isolated and worry the killers are out there and could keep going.

“If somebody commits it and gets away with it, they feel more comfortable in committing it, so it’s very important we bring them to justice,” said Tracy Dunn with NOAA’s Division of Law Enforcement. 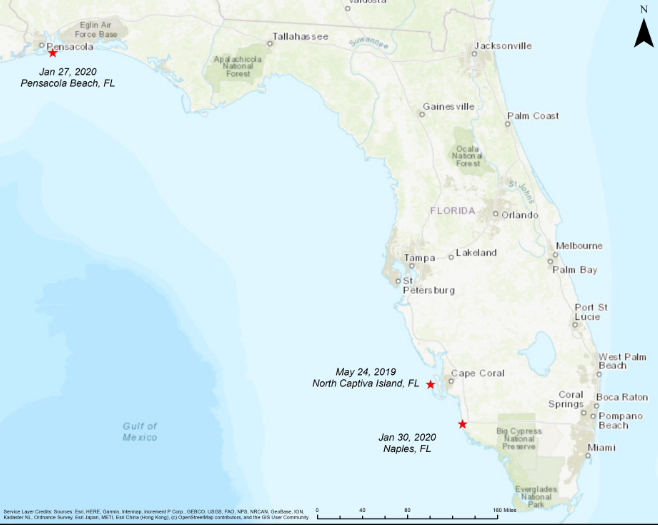 They are seeking information from anyone who may have details about these incidents.

Tips from people like you who might know something, anything, about these dolphin killers are vital to the investigation.

“Getting the necropsy results and the information and what that can provide, but really, in all honesty, the tips will drive the investigation,” Dunn said.

Biologists believe these cases all stem from humans feeding wild dolphins. Those dolphins then learn to associate people and boats with food, which can put them in harmful situations.

NOAA says the dolphins killed were in a begging position when they were killed.

Dolphins are then more likely to suffer fatal impacts from boat strikes, entanglement in or ingestion of fishing gear and acts of intentional harm like the above incidents.

You can prevent harm to wild dolphins by refraining from feeding or attempting to feed them.

Billy Gunnels, an associate professor of behavioral biology at FGCU, said it’s possible whoever hurt the dolphin in Naples, leading to its death, could have lured them with food.

“Whether this happened, I don’t know,” Gunnel said. “But there’s no question that it’s very possible you can train an animal to associate you with a reward and then take advantage of that.”

Some boaters we spoke to were shocked, sickened and angry. These people share the water with our dolphins and they want justice.

Veteran boat captains Allen Walburn and William Garaghty said dolphins can be annoying. They want their fish, and that can mess up fishing lines.

They fear one boater, or more, took that frustration way too far.

“It’s a problem that’s happening more and more frequently and I don’t know the remedy but killing them is not the idea,” Walburn said.

Since 2002, at least 29 dolphins (including the above) have stranded with evidence of being shot by guns or arrows, or impaled with objects like fishing spears. Four incidents have occurred within the last year, NOAA Enforcement says.

Not in good stewardship and absolutely illegal.

“To take a dolphin’s life merely because he took your bait or stole your fish, it’s disappointing,” Garaghty said.

Harassing, hunting, killing or feeding wild dolphins, or attempting to do these activities is prohibited under the Marine Mammal Protection Act of 1972.  Violations can be prosecuted either civilly or criminally and are punishable by up to $100,000 in fines and up to one year in jail per violation.

“It’s frustrating,” Walburn said, “but they have the right to do it it’s their water. If you don’t like it, take your boat and up and move somewhere else.”

If you have any information on any of these incidents, please call the NOAA Enforcement Hotline at 1-800-853-1964. Tips may be left anonymously.