Two suspects have been arrested Sunday after a fatal shooting in Charlotte County.

The shooting happened Saturday around 2 a.m. at the School House Square plaza. The victim and at least one of the suspects were at the Over the Bridge Bar & Grill around the time of the incident.

“It’s a good thing that they were caught that quickly, so people don’t have to worry about them,” William Darby said.

Charlotte County Sheriff’s Office deputies said an argument broke out inside the bar and ended with the shooting outside. Bar patrons gathered inside for a rap concert when things turned ugly and moved to the parking lot.

Ty Place runs a newspaper stand feet from the bar. He told us he saw the crime scene early Saturday morning.

“I could see that there were police cars all over, lights all over, and they had yellow tape all over the area,” Place said. “Everything was blocked off.”

Place said he couldn’t believe a deadly shooting occurred in the plaza.

“I was really shocked because I mean I work very close to there,” Place said. “And, honestly, I didn’t feel that this was an unsafe area or that anything like that would ever occur.”

Charles Johnson, the founder and owner of Over the Bridge Bar & Grill, shared a statement 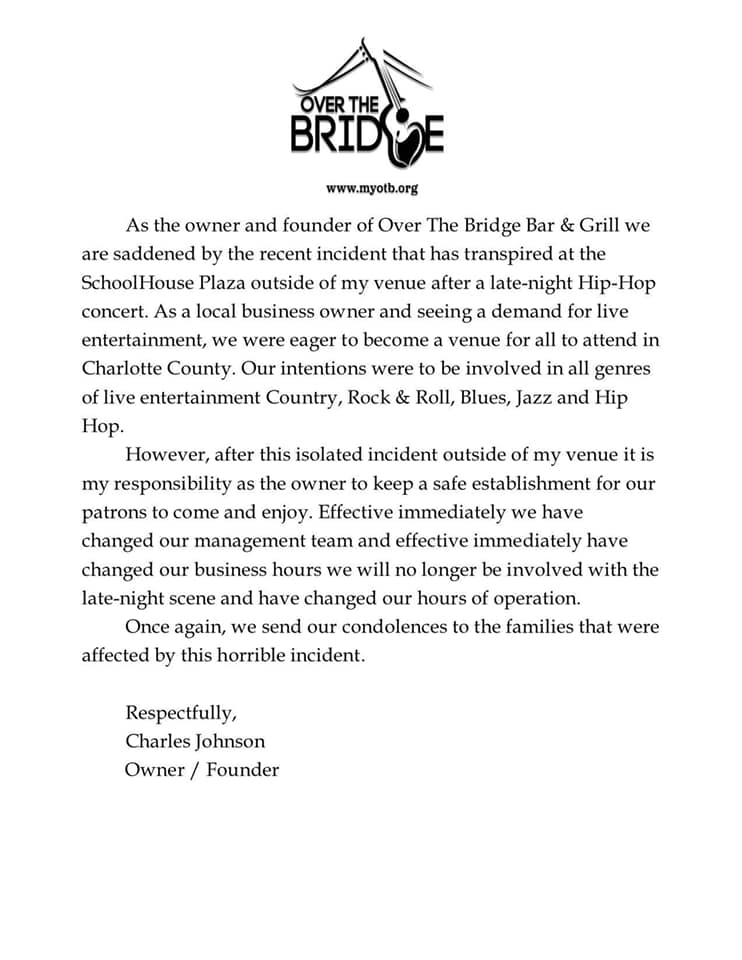 The relationship between the victim and the suspects are unknown at this time. Right now, detectives are still seeking information surrounding the incident. If you have any information, please call 941-639-2101.

“Any place can have shootings today,” William Darby. “The world is going nuts.”