Investigators arrested Jeovanni Hildebrand Hechavarria, 35, of Fort Myers, in 2017. One of the victims, who we’re keeping anonymous, says Hechvarria attacked her while she was a patient at Cape Coral Hospital in 2015.

Jeovanni Hechavarria is in court this morning. He is accused of raping and sexually assaulting multiple victims while working as a nurse at the Cape Coral Hospital. State says they believe trail will take longer than 4 days. @winknews pic.twitter.com/BsuCdkfx0e

Hechavarria was fired on July 16, 2016, just one day after one of the rapes is claimed to have taken place.

The former overnight nurse is accused of raping a patient under the influence of a sedative on July 16, 2016, at the Cape Coral Hospital, according to the Lee County Sheriff’s Office. 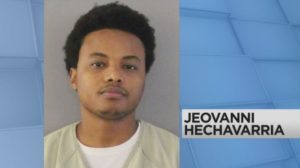 Hechavarria is also accused of threatening the victim that he would rape her again and warning her not to tell anyone what happened, according to Health Department documents.

This trial, which is just for one of his three victims, is expected to last four days.

Hechavarria denied a plea deal Tuesday. If he is found guilty, he faces a maximum of 30 years for this charge and up to 75 years for all three victims.

Both the State and the defense came in heavy with last-minute motions.

The State changed the charge to say the victim in this cas4e was “physically helpless to resist” as opposed to “physically incapacitated.”

The defense then made sure witnesses in the case would not be allowed to discuss the charges against the other two women; one of whom we spoke to back in August 2018.

“That’s not an experience that anybody wants to know,” she said. “They can’t say that. That’s the whole reason that you severed.”

She called for pre-trial publicity, asking the judge to filter out jurors who already know about the case.

Fifty potential jurors were brought into the courtroom and were asked questions, some of them very personal.

These questions are personal. Several potential jurors said they’ve been victims of similar crimes to the ones Hechavarria is charged with. One woman said being in the same room as Hechavarria is hard for her. @winknews

So far, two jurors have been dismissed because they know too much about the case. The court is calling these potential jurors in one by one so that other jurors who don’t know anything don’t overhear information.

Another juror was dismissed because she is related to Hechavarria through marriage and said she couldn’t be impartial.

The hardest question for some jurors: Have you been a victim of a crime?

Multiple men and women said they’d been raped or molested. One woman said it was too much to sit in the room with Hechavarria. She was dismissed.

The court is picking a jury right now, but there are some concerns about reaching an agreed upon panel of 8 because of how many jurors say they’ve heard of this case before. @winknews

The six-person jury and two alternates were selected Tuesday evening and have been sworn in.