Every day, there is a new app that kids know about, proceed to download and use. For parents like Autmn Glick, keeping pace is overwhelming and nerve-racking.  “My son was talking to ‘a friend,'” she said. ”It could be anybody. You don’t know.”

Charlotte County Sheriff’s Office detectives fear Nathan Potter, 37, targeted more kids than they have uncovered. Potter appeared at the Charlotte County Courthouse on Wednesday as he is facing charges for the sextortion of a teenager in Canada while he was living in Punta Gorda.

Investigators say Potter had downloaded a children’s app called ‘Sketch’ on his phone. He  was using it to get children to talk to him on a separate app called ‘Discord.’ WINK News asked parents if they recognized Discord’s blue icon. But none could tell us what the app does.

Rich Kolko, WINK News safety and security specialist, said Discord is a popular gaming app that predators use to exploit children. “Discord is specifically designed for voice, text and pictures,” he said. ”A way to warm in there and start to talk to these kids. Pretend they’re a gamer.”

Sean Li, the director of trust and safety at Discord, said in a statement to WINK News:

“We’re committed to ensuring that Discord is a positive and safe place for all our users. We have a zero-tolerance approach to illegal activity on our platform and take immediate action when we become aware of it. Once we are alerted of any violations we quickly investigate and take action, including removing content, banning users, and shutting down servers. The team is continuously improving our policies and processes, and we are firmly committed to raising the bar on trust and safety on our platform.”

The following graphic is the most recent list of apps the Sarasota County Sheriff’s Office said parents need to know about: 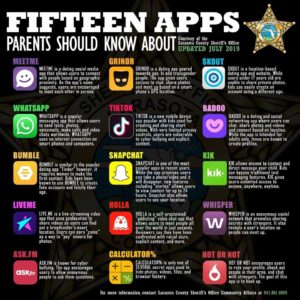 There sheriff’s office has 15 different apps. But Discord is not on its list. More proof that parents have difficulty keeping up with the risks their children face thanks to smartphones and the ease of entry of new social media apps.