Abu Bakr al-Baghdadi, the ruthless leader of the Islamic State of Syria and Iraq (ISIS) who once controlled a vast swath of territory and tens of thousands of jihadist fighters, died in a raid by U.S. troops in northern Syria, bringing a dramatic end to a years-long U.S.-led hunt.

Addressing the nation on Sunday morning, President Trump said a team of U.S. special forces targeted al-Baghdadi in a “dangerous and daring” overnight raid. During the operation, the ISIS leader was “crying and screaming” and attempted to flee through a network of underground tunnels, the president said. As U.S. forces and dogs approached him, al-Baghdadi detonated a suicide vest, killing himself and a group of children who he brought with him, according to Mr. Trump.

“He died like a dog. He died like a coward,” Mr. Trump said, adding that he watched much of the raid in real time from the White House Situation Room.

Mr. Trump said test results confirmed the identity of ISIS leader’s body, which he noted had been mutilated by the blast. During the operation, the president added, U.S. forces killed a “large number” of ISIS militants and collected intelligence from the terrorist group. No U.S. service members were killed.

The Syrian Observatory of Human Rights (SOHR) said the raid took place at a compound at about 12:30 a.m. local time to the west of the town of Barisha, a mountainous area about 25 miles west of Aleppo overlooking the Turkish border. The area is a hotbed of activity by al Qaeda cells in Syria.

SOHR said eight U.S. gunships and a fighter jet fired on targets in the area for about two hours, with messages blasted over loudspeakers in Arabic urging those in the compound to surrender. The group said nine people were killed, including two women and a child.

Pressed by reporters, Mr. Trump said the operation to target al-Baghdadi was not linked to his controversial decision to withdraw all U.S. troops from northern Syria. The abrupt move earlier this month was seen by many Republican and Democratic lawmakers as an abandonment of the U.S. Kurdish allies there. Turkey and allied Arab groups invaded the territory the Kurds acquired in their U.S.-backed fight against ISIS soon after the American withdrawal.

The Syrian Defense Forces (SDF), the main Kurdish group that has fought alongside U.S. forces against ISIS, hailed the overnight operation on Sunday. “Successful & historical operation due to a joint intelligence work with the United States of America,” said General Mazloum Abdi, the SDF commander.

Al-Baghdadi’s death also comes just days after the U.S. announced it would be sending additional troops into Syria to protect oil fields from ISIS.

Iraqi and Turkish officials said both countries had shared intelligence with the U.S. prior to the raid. 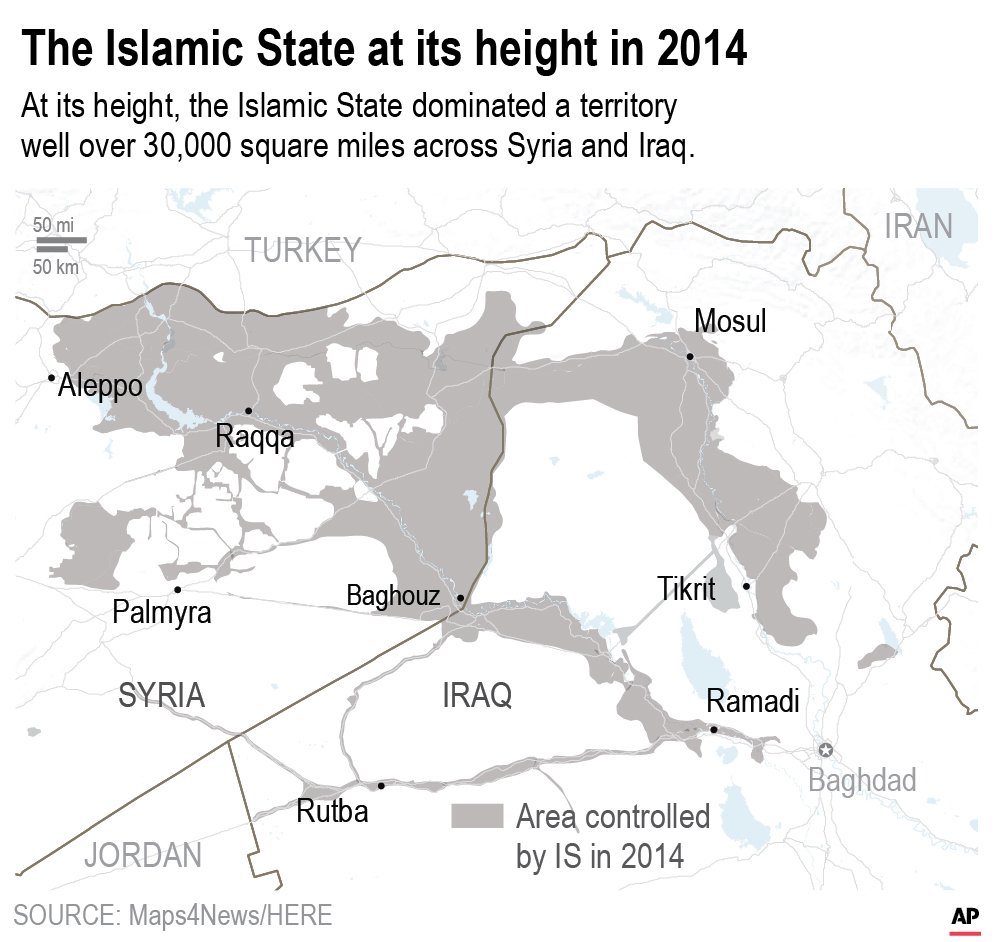 Al-Baghdadi, who has rarely been seen in public, appeared in a video in April for the first time in five years. The video showed al-Baghdadi with a bushy grey and red beard and seated with a machine gun next to him.

In December 2016, the U.S. State Department raised its reward to $25 million for information on al-Baghdadi, making him one of the most wanted terrorists in the world.

Al-Baghdadi was born in 1971 and claimed to have been descended from the Prophet Muhammad. After the U.S. invasion of Iraq in 2004, al-Baghdadi was detained in a prison camp that became an incubator for jihadis.

Released a year later, he joined al Qaeda’s offshoot in Iraq, rising to become its leader, before moving into the chaos of Syria’s civil war and renaming his group ISIS.

At its peak, ISIS ruled over an estimated 10 million people in Iraq and Syria, enslaving women and performing public executions. Although its territorial caliphate ceased to exist earlier this year, there are still as many as 18,000 ISIS members in Iraq and Syria and Kurdish forces have said another 12,000 accused ISIS fighters were imprisoned.