Former Punta Gorda Police Officer Lee Coel was sentenced to 10 years probation and to pay restitution after a plea deal was reached to avoid trial and jail time.

Before Lee County Circuit Judge Margaret Steinbeck, Coel changed his plea from not guilty to no contest on a lesser charge of second-degree manslaughter Wednesday.

He will also pay restitution in an undetermined amount to Mary Knowlton’s husband Gary Knowlton.

Knowlton’s husband gave emotional testimony during the hearing, saying the blame laid with many, not just one.

Coel was set to go to trial on October 22, with charges of first-degree manslaughter in Knowlton’s death during that August 2016 demonstration.

Coel used his personal revolver loaded with live rounds instead of blanks. He has since been fired and lost an appeal of his termination.

State attorneys wanted to try Coel based on Culpable Negligence— Reckless Disregard of Human Life, Putting Another Person at Risk of Injury or Death.

Coel was placed on administrative leave in 2016 while the Punta Gorda Police Department investigated the shooting. They didn’t fire him until March 2017, two weeks after the state attorney filed criminal charges.

The night Knowlton died started when she went to a citizens training academy along with 34 others.

The organizers randomly selected her to pretend to be a police officer, while Lee Coel played “the bad guy.”

Coel pretended to burglarize a vehicle and was supposed to fire blanks downward to startle Knowlton, but instead, the unthinkable happened.

Two bullets ricocheted off vehicles and struck Knowlton in the stomach and elbow. The retired librarian turned away from Coel, fell on her knees, bleeding heavily from aorta.

Knowlton’s husband, Gary was ten feet away from her when she was hit. He and many of the officers present first thought she was role playing until gary turned her over.

Mary Knowlton was later pronounced dead at the hospital.

Gary said, “to not check the chamber of that gun or not check it all all… It doesn’t make sense.”

WHO IS LEE COEL?

Coel grew up on the east coast of Florida and started his career at the Miramar Police Department in 2012.

There, he got into trouble for surveillance video which shows him yanking a man out of his patrol car. An internal investigation also said he turned the air off with the windows up.

After 15 months on the job, his lawyer says he was forced to resign. 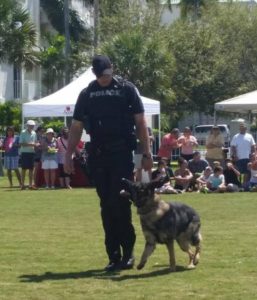 He then joined Punta Gorda Police Department in March 2014.

In his first year there, he received high marks in performance reviews, and a supervisor stated he showed “Good common sense” and an “Excellent attitude”.

But before he fatally shot Knowlton, Coel had memos written about his actions.

One happened on February 4, 2015, when Coel accidentally discharged his taser at home – he was not disciplined.

In another memo, written on October 23, 2015, a supervisor says Coel was insubordinate to him and questioned his authority.

Then, exactly one week later, Coel saw a man named Richard Schumacher riding his bicycle without a light. When Schumacher wouldn’t stop Coel released his police K-9, putting Schumacher in the hospital.

Punta Gorda hired an expert that cleared Coel of wrongdoing, but taxpayers still ended-up paying $70,000 dollars as part of a settlement.

In the wake of Knowlton’s death, Schumacher’s lawyer, Scott Weinberg, says Coel never should have been there, “The police chief, the city council, everybody was on notice when that K-9 video was released. Everybody knew this man was dangerous, and they let him keep his badge and his gun.”

The friends of Mary Knowlton who we spoke to Wednesday told us the news of Lee Coel’s accepted and approved plea deal caused them to relive their loss of a dear friend.

“Mary had to, you know, get the worst end of the mistake, and her family,” said Joseph Russo, a neighbor of Knowlton. But, [Coel] should do a little time.”

Knowlton’s friends say they want to focus on the way she lived.

“She went to educators and guidance counselors; she talked to students,'” said Katie Mazzi, Knowlton’s close friend. “And she kind of drafted a blueprint for what would draw teenagers into the library.”

Knowlton’s legacy is present at the new library in Punta Gorda. It’s a daily reminder of her passion for books and learning, something Mazzi said she will miss.

“I’m rather short; Mary was rather tall,” Mazzi said. “And I always liked to say, ‘You stood in her sunlight, never her shadow.'”