Waiting for a kidney transplant can be agonizing and painful. The process is supposed to be getting easier, but that’s not the case here in Florida.

A map from the Department of Health provides the most recent data which shows how many adults have been told they have kidney disease.

Glades County is the highest in our region with 6.3%. Charlotte is the lowest at 1.6%.
In Lee County, it sits at nearly 4%. That’s where WINK News health and medical reporter Channing Frampton met one father who’s been waiting for a transplant for years. 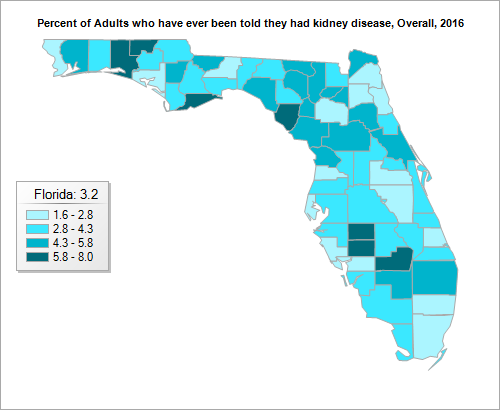 “I was devastated,” said David Ortiz who lives in Cape Coral. “I was in my twenties. That’s not easy news to take in your twenties.”

Ortiz learned his kidneys were failing nearly nine years ago.

Waiting for a kidney transplant after years of dialysis, while making the most of life with his kids and fiance.

“I want to be able to do things with them,” said Ortiz.

New research from Drexel University shows states that expanded Medicaid under the Affordable Care Act had more kidney transplants than states that did not.

Florida is one of the states that did not expand Medicaid. Joseph Karan, director of advocacy for the National Kidney Foundation of Florida, says it’s a huge issue.

“If they don’t have some form or insurance, they’re never going to get healthy enough to even be considered for a transplant,” he said.

While Karan and Ortiz push for changes at the state level, President Trump signed an executive order to help nationally.

“My order supports the selfless individuals who donate kidneys by granting them reimbursement for extra expenses associated with organ donations such as lost wages,” said President Trump.

Karan says he loves the idea. “I’m just waiting for the proof.”

While Ortiz hopes someone will hear his story and be a match. “I try to keep my hopes up and hope that it will happen.”

Ortiz says his insurance would pay for anyone who’s a match to go through the donor process.

For more information on being a donor and the National Kidney Foundation, click here.

If you are interested in helping Ortiz, you can contact him via Instagram or email Living Donor Coordinator Sarah Willis, RN with Largo Medical Center at [email protected]