Arcadia ‘Building a Village’ to guide kids to success

Arcadia Police officers and first responders used their uniforms for a different purpose in Louis C. Anderson Park, playing kickball against children of the area as part of one Fort Myers man’s goal to inspire people to play an active role in influencing Florida’s future.

Shawn Washington grew up in Arcadia and saw a need to provide the community’s kids with healthy activities and positive role models.

“I was like ‘hey, how about we come up with some activities for the kids,” Washington said. “When there’s no activities for kids in the community, they’re lingering, roaming the streets trying to find something to do, or sitting at home playing video games.”

What started as a day of free food and fun in the park grew into Washington and other volunteers ‘Building A Village’ in Arcadia. He said that name was chosen for the nonprofit because it takes a village to raise a child, and the entire community contributes to their goal of providing activities to kids on the first Saturday of each month.

“Everything we do is a joint effort between us and the community,” said Darien Bailey, another one of the founding father-figures of Building A Village. “None of us are rich, and we all have families to take care, so for us to embark on an endeavor like this out of pocket would be impossible but that’s where the village aspect comes in. We have people stop by and give a case of water, money, a book bag.” 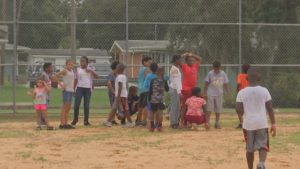 Arcadia businesses like Beef O’Brady’s were also eager to get on board by donating and hosting fundraisers for the organization that keeps kids busy, and out of trouble. Parents like Gakayla Riley see it making a positive impact on their children and community.

“You see a lot of kids come together,” Riley said. “They basically help them a lot, like a father figure, and a lot of kids don’t have that so a lot of them see them as mentors.”

The volunteers involved believe they can guide children towards success as they help them focus their energy into something positive.

“It gives us an opportunity to mentor them, if we can do that we can prevent some kids from entering the penal system,” Bailey said.

Washington wants to start helping high schools students by providing them with college tours, as well as refurbish the park his organization hosts monthly activities in. Everyone involved says the reward is great.

“The greatest reward is the smiles on the kids faces, hands down,” Washington said.

For more information you can visit Building A Village on Facebook.