What makes a bus stop safe, according to the law

For nine months a year, around 50,000 students across Lee County get to and from school by riding the bus.

Sophia, 12, starts seventh grade this month, and her mom Fabiola Silva wants to make sure she gets to school safely. Because before Sophia hops on the bus, she waits at a street corner in her Cape Coral neighborhood.

School is still a week away, but starting Friday, people will see buses fanning out across Lee County. Drivers will be going on “dry-runs” of their routes, running through the motions to check for efficiency and bus stop safety.

By law, a bus stop cannot just go anywhere. Before drivers hit the road, the school district said it carefully decides where bus stops go and whether they are safe.

“The process takes time, it’s not something that can happen overnight,” Mark Lewis, route specialist for the Lee County School District, said.

He takes into account everything from the stop location, to walking conditions, to distance from students’ homes.

Then once stops are created, they still have to be inspected.

According to the school district, by law, school bus stops have to be 200 feet from an intersection with a traffic light and at least 50 feet from one with a stop sign. Stops are not required to have sidewalks, especially since many neighborhoods in cities like Cape Coral do not have any. And they technically do not have to have street lights either, but stops do need to have clear visibility for more than 200 feet.

But the district said they try to go beyond what is required.

“When the safety department goes out there, they look at other options too. They don’t just look and go, ‘OK. Here is a bus stop that fits the criteria, we’re good to go,’” Lloyd said. “If there is a sidewalk, or there are lights one block over, we will pick the most secure spot, the safest spot for those kids to be at.”

He says it is a team effort between the safety department and bus drivers.

“They’ll come back and say, ‘Hey I don’t think it’s safe here. I can do it shorter here. I might be able to swap these two routes here,” Lloyd said. “They really are our eyes and ears out on the street.”

And parents are stepping up to show their kids what it means to be safe at the stop too.

“I tell her, ‘Stay on this side, so with the traffic coming this way they can see you,’” Silva explained as she walked the same street her daughter does to get to her bus stop.

Changes for the new school year

By the start of school, 200 Cape Coral stops will have benches. They are being installed thanks to an experimental effort by the school district, the City, and the Rotary and Kiwanis Clubs of Cape Coral. The benches cost roughly $225,000, and are largely funded by donations to their “Safe Zone” program.

In Lehigh Acres, there were 419 school bus stops identified earlier this year that do not have a streetlight within 100 feet. According to Lee County, the Lehigh Acres Streetlighting Municipal Services Taxing Unit (MSTU), LCEC and FPL have made these locations a priority. LCEC anticipates having 241 lights requested for unlit school bus stops in their areas by the end of August. FPL told WINK News that anticipate to install 170-180 streetlights in the area over the course of the year, once they receive the necessary paperwork from the county.

Lee County also said there are plans in place and money allocated to build sidewalks on local streets. WINK News has requested the exact locations and budget for this project, and will update this story when it becomes available.

The City of Cape Coral provided this map of their sidewalk program, with plans to add sidewalks through FY2023. 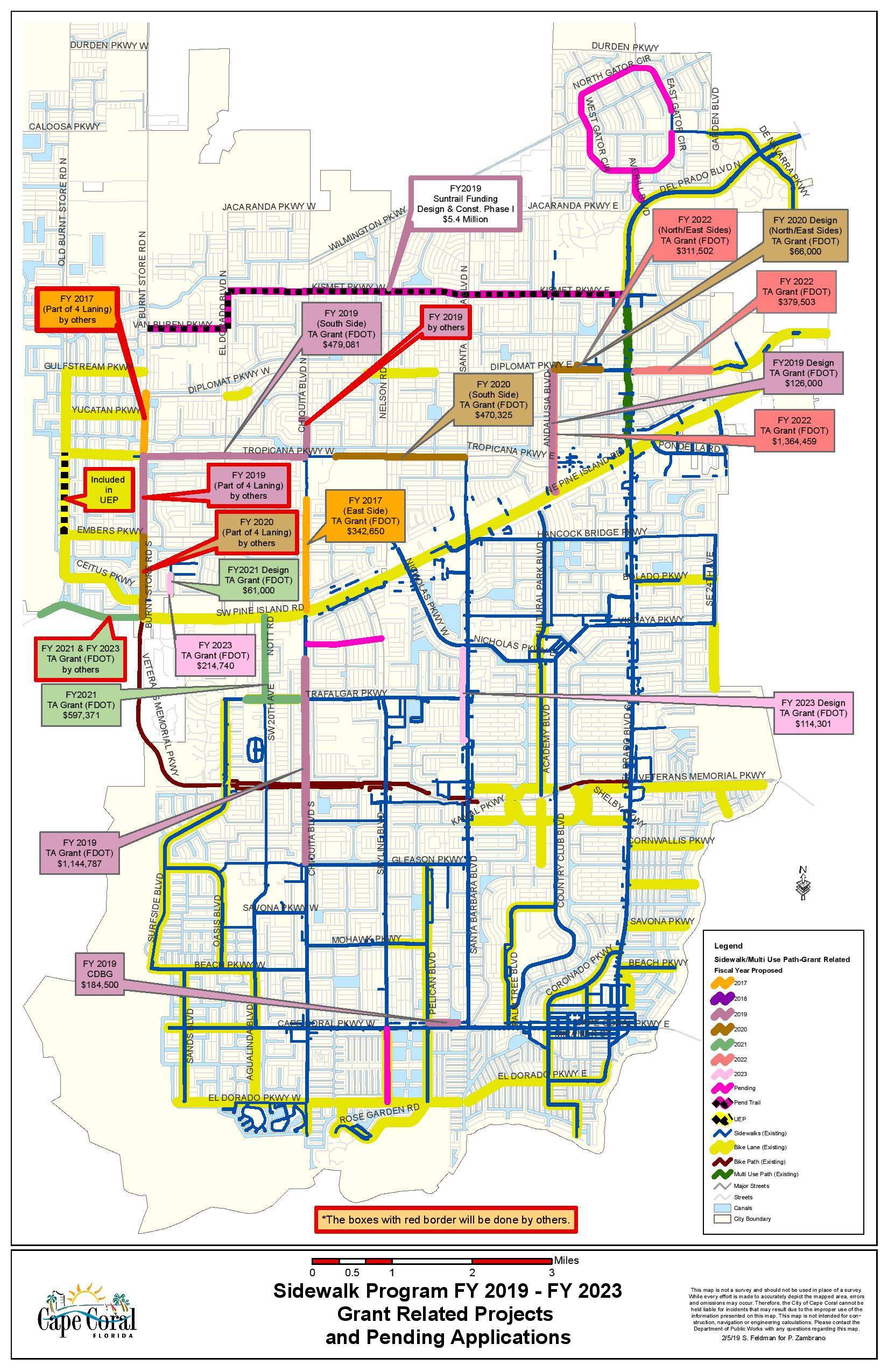 How to report bus stop issues

There are almost 7,000 bus stops across the county. The district said while all-new stops are inspected, it is not able to inspect every permanent bus stop each year. So the district asks that if parents or any member of the community notices issues at a bus stop, let the district know immediately.

Parents can do that by calling their child’s school directly, or the designated school zone’s transportation center: