One North Naples woman is inspiring retirees to help the next generation succeed. Diane Halas loves living at Vi at Bentley Village, in part due to employees helping care for residents like her.

“When need arises they’re usually right there,” Halas said.When Halas noticed staff at the senior living community struggling to pay for schooling, she wanted to create a way to take care of them in return and ease their financial struggles.  Her idea was the Bentley Village Foundation.

“It came from really a couple of conversations with people who worked here (at Vi at Bentley Village),” Halas said. “One employee was working three jobs to try to go to school.”

Halas then filed the incorporation papers to create a foundation, partnering with the Community Foundation of Collier County nonprofit. She said it wasn’t hard to get other retirees on board.

“We let people know what we were doing, and people brought their checkbooks,” Halas said. 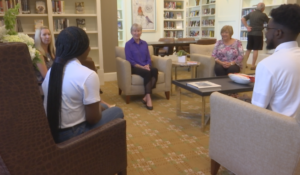 The Bentley Foundation President said one donor even contributed $100,000 to support scholarships for dependents of people living in Vi at Bentley Village, which really helped the nonprofit get going.

Through those community contributions and an annual golf tournament and ball at Bentley Village that raises money for the cause, the Bentley Foundation has awarded 39 scholarships so far.

Halas and a board of Vi residents select scholarship recipients based on factors like ‘hardship’ and their service, not based on their geographical location, or their GPA. That’s opening doors for students like Rikenson and Natacha Fabe. These two Golden Gate High School graduates didn’t think college was a possibility until they started serving retirees in North Naples and were later awarded scholarships.

“I was ecstatic when I got it,” Rikenson Fabe said. “I never saved for college, but this scholarship program really helped me out.”

Both siblings are now FGCU students studying to achieve their career dreams.

“Every time I drive into FGCU’s entrance, I’m reminded i’m not supposed to be here,” Nathaca Fabe said. “I’m motivated to help people’s lives the way these people have helped me.”

The siblings said staff at Vi at Bentley Village continue to be a source of support and encouragement for them during their studies.

“It’s really encouraging because they continue to ask us how school is going and continue to give us words of motivation when we need it,” Nathaca Fabe said.

Halas said the scholarships are also renewable in an attempt to prevent students from dropping out.

“As long as you’re on the same course of study, whether you take two years or four years or eight years, we will follow you all the way through, you can have your scholarship renewed each year,” Halas said.

Kelly Haines, who works as an accountant at Vi at Bentley Village, says the foundation helped her reach a major milestone.

“The first one in my family to get a Master’s Degree, and that was huge,” Haines said, “and at my age too.”

Halas said seeing students succeed is the greatest reward for everyone involved in sponsoring their success, and they’re working to create an endowment so scholarships can continue to be awarded for years to come.

“We’re old and we don’t know how long our energy or health will last, so we wanna build a big enough endowment so every year people come through this program and are able to get funding.”

For more on the Wings Scholarships from the Bentley Village Foundation, visit bentleyvillagefoundation.org.