A majority of Americans are concerned that a foreign government might interfere in some way in the 2020 presidential election, whether by tampering with election results, stealing information or by influencing candidates or voter opinion, a new poll shows.

The poll from The Associated Press-NORC Center for Public Affairs Research finds Democrats far more likely to express the highest level of concern, but Democrats and Republicans alike have at least some concerns about interference.

Overall, half of Americans say they’re extremely or very concerned about foreign interference in the form of altered election results or voting systems, even though hackers bent on causing widespread havoc at polling places face challenges in doing so. An additional quarter is somewhat concerned.

Similarly, about half are very concerned by the prospect of foreign governments influencing political candidates or affecting voters’ perceptions of the candidates, along with hacking candidate computer systems to steal information.

In total, the poll, conducted Thursday through Monday, shows 63% of Americans have major concerns about at least one of those types of foreign election interference, including 80% of Democrats and 46% of Republicans.

The results make clear that despite the efforts of U.S. officials to ward off election interference and to urge public awareness and calm, Americans remain anxious that some of the same tactics Russia used to meddle in the 2016 presidential election could surface again in the next race.

Those include the spread of disinformation online to sow divisions among American voters, and the hacking by military intelligence officers of Democratic emails that were then published by WikiLeaks in the run-up to the election. The efforts were aimed at helping Republican Donald Trump over Democratic rival Hillary Clinton, according to special counsel Robert Mueller’s report. 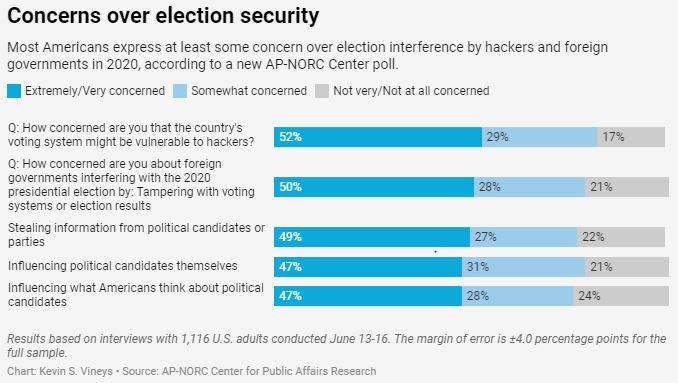 “I think that it’s been pretty well-documented that people have been influenced in the past by social media,” said Luci Dvorak, 32, an Illinois teacher. She said she found it concerning that Trump has been “very casual” about getting foreign help and even seemed to invite it.

Trump said in a television interview last week that he would be open to receiving a foreign government’s help in the next election. He slightly walked back those comments in a follow-up interview, saying that though he would want to look at foreign dirt on an opponent to assess if it was correct, he would “of course” also report it to the FBI or the attorney general.

U.S. officials are on high alert to protect against interference like what occurred in 2016. FBI Director Chris Wray has said the bureau regards last November’s midterm elections as a “dress rehearsal for the big show in 2020.”

He has said efforts to undermine democracy and influence public opinion through social media, propaganda and false personas have continued unabated and are “not just an election-cycle threat.”

“We saw that, therefore, continue full speed in 2018, in the midterms,” Wray said in April at a Council on Foreign Relations event. “What we did not see in 2018 was any material impact or interference with election infrastructure or, you know, campaign infrastructure.”

The decentralized nature of the country’s elections, which are run on a local level and rely on different and varied voting systems, would make it hard for hackers to cause widespread problems.

The poll was conducted roughly two months after the release of Mueller’s report on his investigation into potential coordination between the Trump campaign and Russia.

That report did not establish a criminal conspiracy between Trump associates and the Kremlin to sway the outcome of the election. It did not reach a conclusion on whether the president had criminally obstructed justice, citing a Justice Department legal opinion that says sitting presidents cannot be indicted.

Trump has repeatedly said the report found “no collusion” and claimed vindication in Attorney General William Barr’s announcement that he found Mueller’s evidence insufficient to establish an obstruction charge.

The poll shows about half of Americans think the Mueller report did not completely clear Trump of obstruction, while many also think it didn’t clear him of coordinating with Russia.

Overall, 48% said they think the report didn’t clear Trump of obstruction, while just 20% think it did. Another 30% say they don’t know enough to say.

Many Americans — 44% — also think the report did not clear Trump of coordination with Russia, while 24% think it did and 31% aren’t sure.

“It’s the twisting of the opposition party that’s given him all this static, where he’s not able to move or do what he’d like to do,” said 88-year-old Dennis Halaszynski, who is retired and lives in McKeesport, Pennsylvania.

“They said at the beginning that he’s going to go to jail, and they’re doing their best to put him in jail,” he added. “He’s just not having the time, the proper time, to do what he’d like to do.”

The AP-NORC poll of 1,116 adults was conducted June 13-17 using a sample drawn from NORC’s probability-based AmeriSpeak Panel, which is designed to be representative of the U.S. population. The margin of sampling error for all respondents is plus or minus 4.0 percentage points. Respondents were first selected randomly using address-based sampling methods, and later interviewed online or by phone.