According to Florida Department of Health immunization data, 319 Kindergarten students cited a religious exemption for common childhood vaccines in Southwest Florida for the 2018/2019 school year.

Children are required to be vaccinated against polio; measles, mumps and rubella; Diphtheria, tetanus and whooping cough; chickenpox; hepatitis B; and haemophilus influenzae type b unless they cite a medical or religious exemptions.

But the number kindergarteners citing a religious exemption is at a four year high for students in Charlotte, Collier, Desoto, Glades, Hendry and Lee County.

The number of seventh graders citing religious exemptions is also on the rise and has increased every year for the past four years. 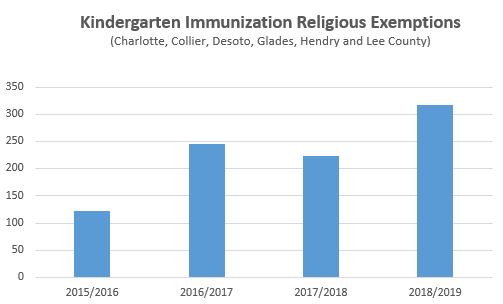 “It’s too easy to get what’s termed under ‘religious’ exemptions because all you have to do is say you don’t want (the vaccine),” said pediatrician Dr. Annette St. Pierre-MacKoul.

Although the number of exemptions is on the rise, the percentage of students with recommended vaccinations is at least 93 percent or higher in the 6-county region.

The highest pockets of kindergarteners citing exemptions are in Lee and Collier counties: around 7 percent.

The problem with even a small number of the population refusing vaccinations is that it can lead to an outbreak of a preventable disease: like measles.

St. Pierre Mackoul said in 2000, it was declared that measles was eradicated from the United States.

INTERACTIVE MAP: Prevalence of Religious Exemptions to Vaccination among Children

But this year, the CDC has reported 764 cases of measles nationwide. Just two of those cases are in Florida.

“The measles outbreaks going on now, came from people overseas not vaccinated bringing the virus into the country and going into the communities that had poor vaccine rates, so it was like the perfect storm happened,” she said.