Invasion of poisonous toads triggers warning in Florida neighborhood: “You can’t even walk”

A Florida suburb is being plagued by thousands of poisonous toads. Experts say the amphibians are bufo toads, also known as cane toads. Residents in the infested Palm Beach Gardens neighborhood worry toxins secreted by the toads will harm their pets and children. 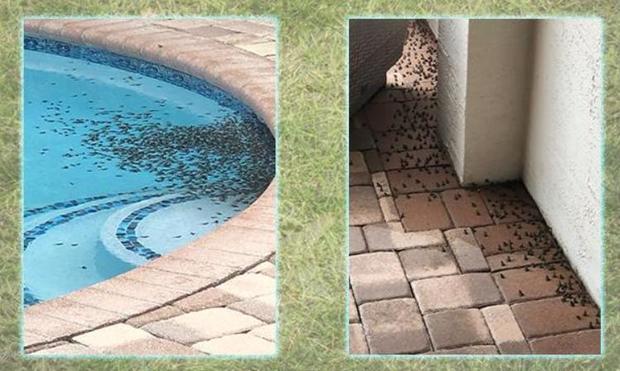 An invasion of poisonous frogs triggered an alert in one community in Palm Beach Gardens.

“I just see a massive amount of toads or frogs everywhere,” one homeowner told CBS Miami. “You can’t even walk through the grass without stepping on one; they’re covering people’s driveways.”

Jenni Quasha, a resident in the neighborhood, contacted her homeowner’s association, but says she was told it is her responsibility to handle the problem.

With three kids on spring break, Quasha said her daughter is scared to walk outside.

“There’s no swimming in the pool and no playing outside and enjoying the outdoors. Just hoping we can figure this out so we can put an end to it,” Quasha said.

Mark Holladay of the pest removal service Toad Busters told WPTV that recent rains coupled with warm temperatures sent the amphibians into a breeding cycle. Holladay said even more toads are likely to spread throughout South Florida in the coming weeks.

Florida Environmental Pest Management has information on Bufo toads and how to keep you and your family safe on its website.

© 2019 CBS Interactive Inc. All Rights Reserved. This material may not be published, broadcast, rewritten, or redistributed. The Associated Press contributed to this report.